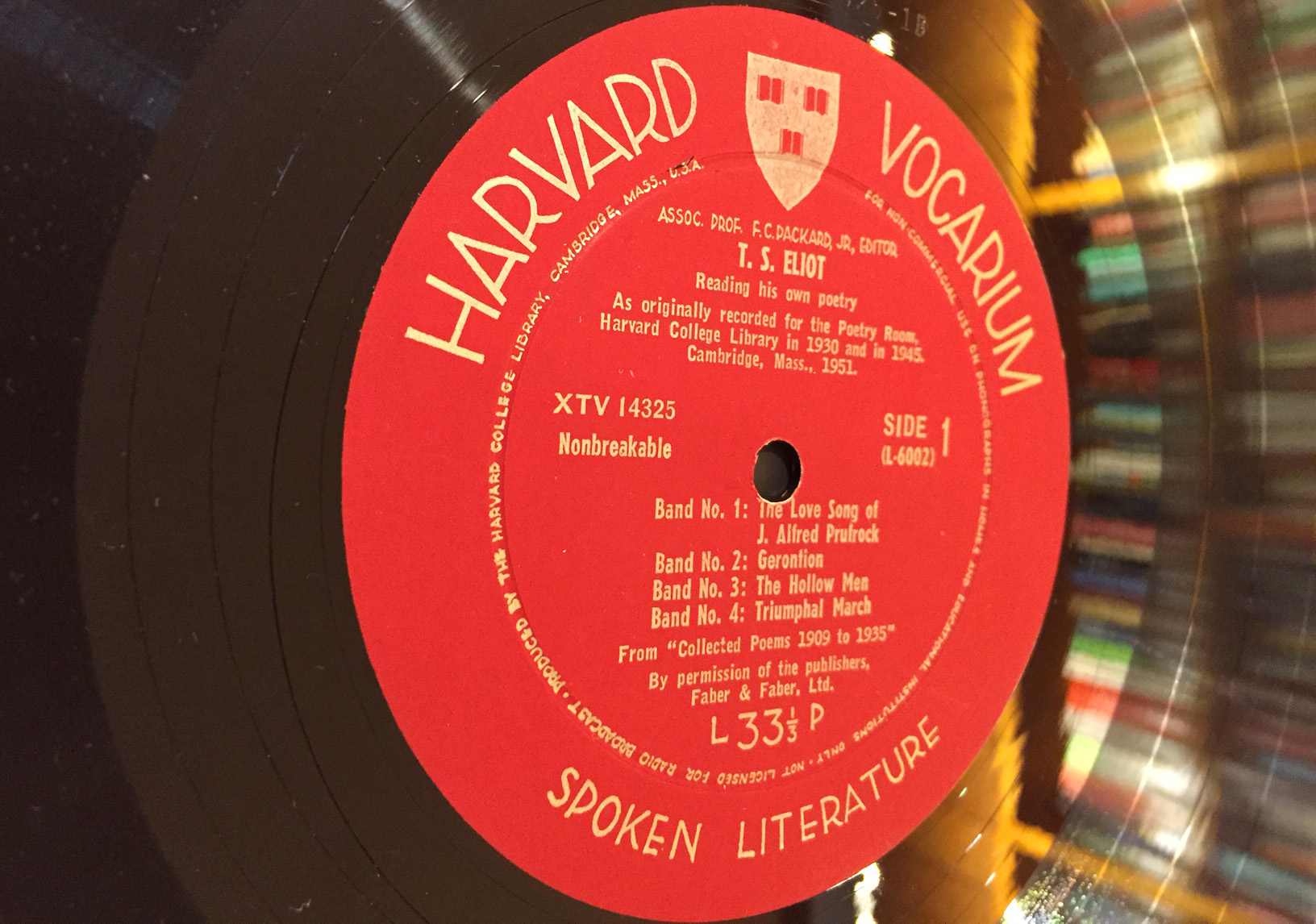 As a 2019 update to the article below, the Poetry Room is pleased to present a series of rare (and decidedly different) “takes” on the opening lines of “The Love Song of J. Alfred Prufrock” made by Eliot during two different recording sessions—one at Harvard in 1947, and one in London in 1948. These recordings were recently cataloged and preserved through the efforts of Assistant Curator Mary Walker Graham and the Poetry Room staff.

We invite you to listen and to compare the recordings for yourselves.

“Prufrock” has always caused a little bit of trouble, and the Harvard Vocarium recordings of the poem—some of the earliest in existence—are no exception.

When you hear the recording, you might be hard pressed to discern the procedural involutions and Transatlantic shuffling necessary to bring it into being. But, in many ways the trajectory of the recording recapitulated the evolution of the poem itself, which Eliot began to write at Harvard University in 1909 and completed in England.

In 1947, after delivering his Morris Gray lecture in May of that year (only his second trip to the United States after his long absence during the war), Eliot agreed to record a range of poems for the Harvard Vocarium record label, including “Journey of the Magi,” “Difficulties of a Statesman,” “Fragment of an Agon,” and “Prufrock.”

This was to be his third Vocarium record. In 1933, during his year-long stint as the Charles Eliot Norton lecturer, Eliot made what we believe to be his first poetry recording (Side One: “Gerontion”; Side Two: “The Hollow Men”). Why he chose those specific poems is unknown.

But one of the reasons for omitting “Prufrock” at that earlier juncture was likely a technical one. At that time, the limitations of the 12″ 78rpm would have prohibited Vocarium editor Frederick C. Packard, Jr., from recording long poems: the reading time of “Prufrock” would have clocked in at approximately eight minutes.

Though I am sure other factors and predilections informed Eliot’s 1933 decision, there is no question that duration did determine authors’ choices in the early years of recorded sound. 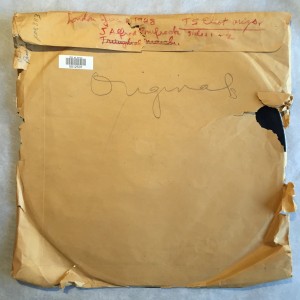 By 1947, the technology had progressed substantially, and the recording of “Prufrock” appeared to have been a straightforward process. We had originally believed that the entire recording (including “Prufrock”) was made at Harvard in May 1947. But after discovering several uncataloged “originals” (labeled “Jan. 1, 1948” and “London”) in 2014 and conducting research in the Harvard Archives, a different picture began to emerge. 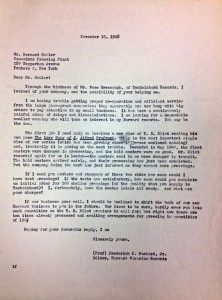 Courtesy of the Harvard University Archives.

Over a year after Eliot’s 1947 visit, in November 1948, we find Packard writing to a pressing plant in Yonkers, New York, for assistance with “the most important single disc of our series… The Love Song of J. Alfred Prufrock.” The first Master discs, he explains, “were damaged in processing, and the hold masters were no good. Mr. Eliot recorded again for me in London—the masters sent to me were damaged in transit” (HU Archives, P115-251). By the time the recording was released in 1949, the Harvard Crimson had added another detail to the mix, suggesting that the final version of the “Prufrock” recording was made  in Eliot’s “London home.”

Whatever the exact process was, the results were a meticulously-crafted reading on Eliot’s part. Eliot’s recording arguably benefits from his rigorous and lengthy experience of recording Four Quartets in England in the mid-1940s. 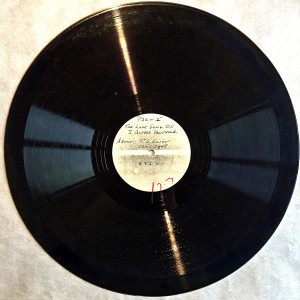 His Vocarium “Prufrock” is characterized by a range of vocal techniques that enhance the poem’s textual contours: these include a series of passages sustained by a single extended breath. For example, the opening gambit “Let us go then, you and I” is supported by a single (almost anesthetizing) inhalation through “a patient etherized upon a table.” The same is true of “streets that follow like a tedious argument,” which Eliot uses a single, subtle breath to carry through to “an overwhelming question.”

This vocal strategy unifies these particular passages into distinct emotional and textual microclimates.

Another noticeable auditory pattern is a series of high-pitched, staccatoed litanies and erratically-timed interjections that swell the progress of certain sections (in particular the ones that begin “my morning coat” and “arms that are braceleted”). Coming as they do after Eliot’s Tiresian assertion, “I have known them all already,” these moments of panicked high pitch are clearly being used to create a sonic contrast with the manner in which he authorizes Tiresias to speak (in a regulated, solemn monotone).

The final audible strategy that I’ll note is one of calm, stately, almost metronomic voicings, such as the manner in which he reads “the women come and go, talking of Michelangelo.” This soothing lower register of Eliot’s acts as a steady, hypnotic undercurrent at key moments throughout the recording. You’ll notice that Eliot resurrects this same becalming tone at the end of “Prufrock,” when “human voices wake us.” In some ways, like an actual hypnotist of that era, he has prepared us audibly for that textual awakening through his dexterous rendering of the sonic contours of the poem.

And, in short, we are not afraid….