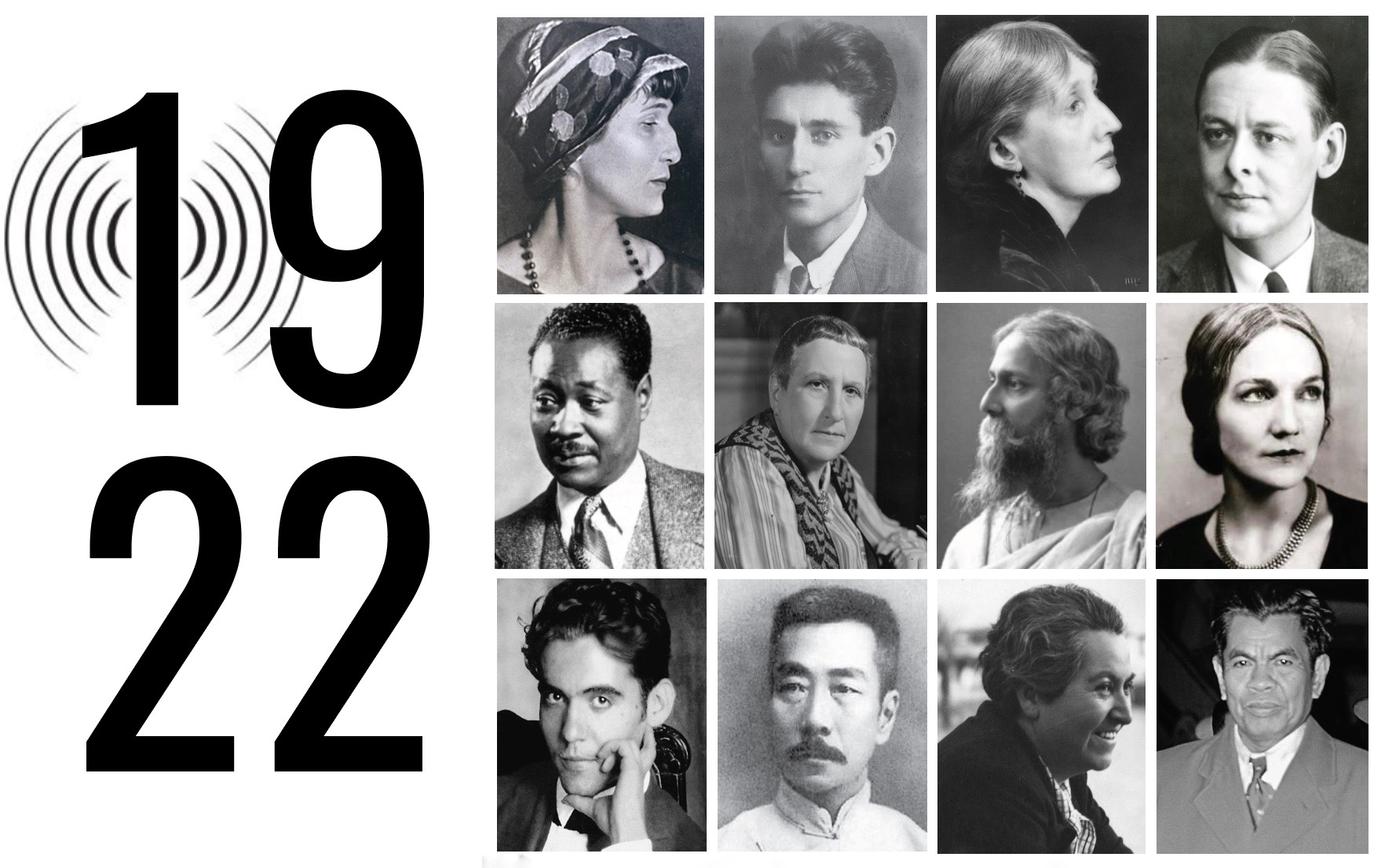 The world broke in two in 1922 or thereabouts.
—Willa Cather

Twenty years ago, I began assembling a compendium called 1922: A Simultaneous Anthology, which would have included works (written and/or published in that year in magazines or monographs) by such authors as: Anna Akhmatova, Jorge Luis Borges, Hart Crane, E. E. Cummings, T. S. Eliot, Mahatma Ghandi, Kazi Nazrul Islam, Lu Xun, Mina Loy, Osip Mandelstam, Katherine Mansfield, Claude McKay, Gabriela Mistral, Italo Svevo, Gertrude Stein, Rabindranath Tagore, César Vallejo, William Carlos Williams, Virginia Woolf, Mohammed Yamin, and more than 25 other poets, writers and thinkers. Though life intervened on its completion, I’ve remained fascinated by the synergy of that year, which seemed to announce the possibility of our being more synchronously and (as John Ashbery, himself born in the 1920s, once put it) “sympathetically alive.”

On the occasion of the centenary of 1922-1923—I thought I’d dust off my rudimentary Table of Contents and place it in your hands—with some brief excerpts from the unfinished Preface (below). Please feel free to add to this list; send ideas to the Poetry Room via email; and/or produce your own anthology. As Sherwood Anderson might say: “I pass the baton in the long relay….”

Instead of a Preface

The authors in this collection were born during the latter half of the 19th century, when (among other emerging movements) the effort to agree upon universal standards of Time was still something of a recent phenomenon. The creation of “public time”—or what Borges, in 1922, would call “unanimous clocks”—was being driven by the rising forces of nationalism, tourism, and industrialism. With special thanks to Capitalism! Our on-going annual U.S. debates about Daylight Savings Time are residual aspects of this sweeping effort to construct uniform time-zones and an agreed upon idea of “day,” especially in so far as it relates to labor and transport. Before the advent of the railroad and its concomitant technology the telegraph, time-keeping was largely a local undertaking. This meant that, until the adoption of standardized time in the fin-de-siecle, a nation might have over 50 “noons” in a single day.[1]

Practically speaking, this transformation allowed trains to arrive “on time” (except Amtrak!) and international markets to open at a reliable hour. For artists, however, “unified time” also imposed a temporal rigidity and the omnipresence of clocks and deadlines. As Anais Nin once observed: “Dates [and times] don’t agree with my transformations.”[2] But there were also experiential and metaphysical benefits: foremost among them, the psychological dimension (others, like Lyn Hejinian, would argue “illusion”) of “simultaneity” and the possibility of increased exchanges–even in-person meetings–between a wide array of writers and thinkers around the world.

By the time we reach 1922, the telephone (AT&T went public that year) and the advent of radio “broadcasting” (the term itself was coined in 1922) had transformed the existence of synchronicity—the awareness of what time it was in Paris/New York/Tokyo—into the experience of simultaneity—the ability to hear a concert in Paris/New York/Tokyo as it was being performed.

Within a decade of the sinking of the Titanic in April 1912—which has long been considered the first simultaneously-experienced event in world history, due to the telegraphed SOS—developments in broadcasting had enlarged the population of those who could experience world-happenings in so-called “real time,” exponentially. The method of transport? Language itself—or, the 0s and 1s into which all of our tongues have now been translated. As a New York Times article from that period observes:

“Few New Yorkers realize that all through the roar of the big city there are constantly speeding messages between people separated by vast distances, and that over house-tops and even through the walls of buildings, and in the very air one breathes are words written by electricity.”[3]

By 1922, the catalyzing power of the airwaves was common knowledge, and the popular imagination was alive to words “getting out and about in the world.”[4]

Throughout this anthology, the words that get “out and about” begin to resonate and echo one another, signaling an ever-swifter and more intricate cross-fertilization of languages (and also, it must be said, the risk of homogeneity and other forces of assimilation). One concept that begins to circle the Earth is not surprisingly that of “enormity” itself. From the “enormous mind” that Virginia Woolf envisions to the “enormous room” that E. E. Cummings documents to the “enormous space” that H. G. Wells surveys to the “vast” land that T. S. Eliot ruminates on to the “the enormous tragic joke” that Claude McKay laments—the  texts of 1922 resonate with this shared sensorium of the enormous, a word that merges the idea of immensity with that of awe and newness (something that is beyond the norms or bounds of one’s pre-existing conceptual framework).

This recurrent depiction of immensity was accompanied by an equal-and-opposite emergence of fragments, minutiae, succinct forms, and serial formations. While this has often been interpreted as symptomatic of societal fracture, this aesthetic shift was in fact quite gradual over the course of the nineteenth century (see the Greek Anthology, a collection of classical fragments, see the Golden Treasury anthology, one of the most popular books in the Victorian era, which was composed of radical excerpts and creative omissions) and also aligned with a proactive interest in transmission and portability.

Whether it be the fleeting skywriting in Mrs. Dalloway (a form that premiered in the skies over England in 1922), the condensed, code-like poems of the Imagists, or the revival of the sonnet and other short literary forms whose duration (or “reading time,” as it came to be called) could fit into the constraints of a 4-minute lacquer disc or a short radio slot, these changes reflected the proactive adaptations necessary for language to travel swiftly across vast distances.

While the idea of post-war fragmentation has dominated the narrative of literary Modernity, an immersion in these works reveals a simultaneous effort to construct new “complexes,” chimeric wholes, and innovative assemblages (even mass movements) that could reflect what F.R. Leavis called: “a more inclusive consciousness.”[5]

Though the works in this anthology do crucially document such themes as fractured gatherings (e.g. Katharine Mansfield and Virginia Woolf), homesickness and social isolation (e.g. Osip Mandelstam and Franz Kafka), impeded progress (Italo Svevo and Paul Valéry), the unpredictable cartography of the unconscious (e.g. Rilke, Proust, and Lawrence), the inherent rupture within language (e.g. Saussure and Stein), the experience of incarceration (e.g. Lu Xun and Cummings) and of systemic oppression (e.g. Kazi Nazrul Islam and Mahatma Gandhi), they also provide examples of attempts to unify disparate entities and to create radical new amalgams—ones that do not diminish the articulation of parts, or the cognizance of differences.

Things did fall apart but artists and thinkers also came together in a range of ways. The confluence of radio’s heyday, telephony’s increasing ubiquity, cheaper printing methods, the rise of small presses, as well as the international tourist industry made possible the awareness of, and in some cases, the actual meetings of several people in this book, for whom the 1920s and 1930s proved a period of dynamic interchange and engagement. During this period, Gabriela Mistral (of Chile) met Rabindranath Tagore (of India); Tagore encountered Paul Valery (of France); Valery befriended H. G. Wells (of England); Rainer Maria Rilke corresponded with Marina Tsvetaeva (in Paris) and Boris Pasternak (in Russia) from a sanitorium in Switzerland circa 1926; Jorge Luis Borges wrote “capsule biographies” of T. S. Eliot, Virginia Woolf and Paul Valéry from Argentina; and Langston Hughes read (and subsequently translated) Federico Garcia Lorca (of Spain), and Claude McKay (of the United States) and César Vallejo (of Peru) journeyed to Moscow for the International Congress in 1922 and 1928 respectively. In addition, Woolf’s Hogarth Press was responsible for the publication (or translation/reprinting) of works by a range of authors in this anthology, including the writings of Sigmund Freud, Italo Svevo, and Rilke.[6]

In many ways the composite structure of the anthology itself is a fitting means to explore the “deep presence” emerging in the early 20th century. The appearance of Robert Bridges’ Spirit of Man amalgam (1916) and the “active anthologies” of the Imagists and Vorticists transformed the anthology into a creative genre in its own right.

By 1922, the anthological form was so pervasive and recognizable that Eliot’s Waste Land was actually reviewed/critiqued as “an anthology of assimilations,” and Conrad Aiken was able to declare: “The Twentieth Century is the age of anthologies.” By 1928, it was possible for Robert Graves and Laura Riding to claim that “it is impossible to hold out against the anthology.”

The appearance of these texts in A Simultaneous Anthology is not simply an academic afterthought, then, rather it partakes in the “compounding” impulse of Modernism[7]: the urge to construct an articulation of one’s time (as “collateral and incompatible,” as MacNeice once put it, as its occurrences may be) or indeed to change the nature or perception of that time (not in hindsight, but in the moment); the struggle to integrate disparate voices and viewpoints into a single, compact, catalyzing amalgam without sacrifice of what Fred Moten calls our “generative differences.” So that what we separate by our very presence can come together, and only then, the whole cycle of transformation will arise (Rilke, Duino Elegies, 1922).

[1] For a far more nuanced and riveting discussion of this, I highly recommend Stephen Kern’s The Culture of Time and Space, 1880-1918.

[2] I should add that at the same time as these massive unification efforts were occurring, discoveries about the shifting nature of tectonic plates, the evolution of language (e.g. the last volume of the OED was published in the 1920s and the second edition of Saussure’s linguistic treatise appeared in 1922), and the popularization of psychoanalysis, not to mention independence movements (the Irish Free State was recognized in 1922) and mass uprisings against colonial forces of oppression (the Great Trial occurred in India) were providing a powerful  counterpoint to any simplified notion of unity.

[5] Beyond literature, 1922 saw a range of new (and renewed) forms of union and amalgams: including the founding of the International Court at the Hague and the dedication of the Lincoln Memorial.

[6] The only exception to this is Ferdinand de Saussure, who died in 1913. The text that I’ve included is the revised (and most frequently cited) Second Edition of his linguistic treatise published in 1922.

[7] “Every age has tried to compound such a volume. Every great culture has had such a major anthology.” Ezra Pound, Active Anthology (London: Faber & Faber, 1933), p. 18.