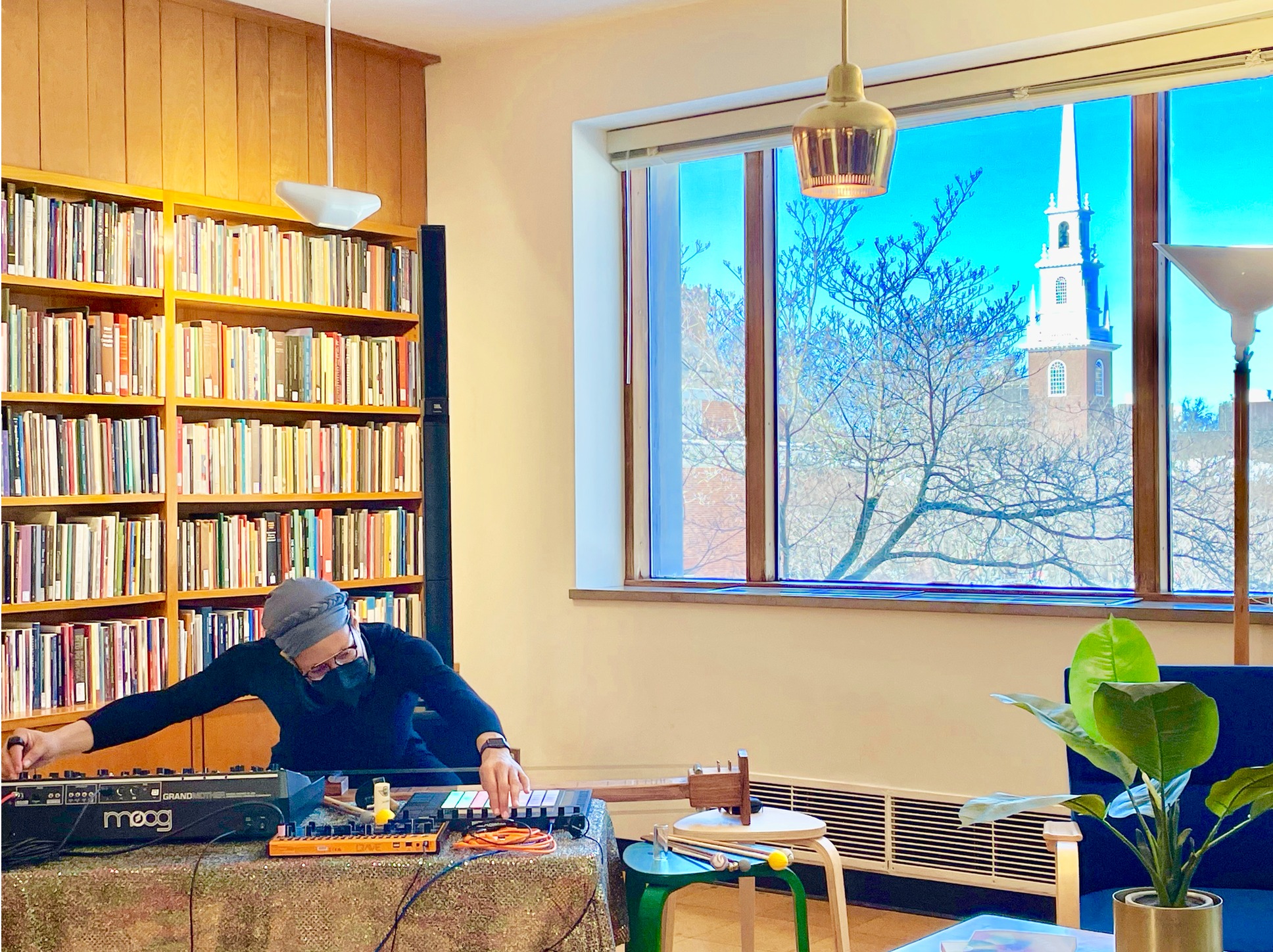 The Honourable Elizabeth A. Baker is a new Renaissance artist, whose current work explores the natural energies of sonic spaces and seeks to dismantle the hierarchies that humans have imposed on the world (and themselves). During her time as a 2021-2022 Radcliffe fellow, Baker has immersed in the Poetry Room’s audio archive and recorded several new mesmerizing pieces that combine an innovative array of electronic instruments (including one that was built specifically for her) with samples from the WPR’s archival sound recordings. The result: AGGRESSIVE PILLOW TALK, an album that aims “to liberate sound from a human-centric narrative.” Click here to access recordings of “Underbelly Law” (recorded in the Law School garage) and “Vibes Under Watchful Eyes” and “Dynamic PONG” (recorded in the Poetry Room).

This April, I had the pleasure of speaking with Elizabeth about her creative process: this blog post presents selections from our hour-long conversation.

Your Radcliffe project is called “Field Studies”: why did you choose to use a poetry sound archive as the “field”?

The concept was originally that I would just go into a natural location, and tap into its energy and become part of the sonicscape that is there. However, it took a little bit to get acclimated to the “crimson tape” that is a hallmark of Harvard and the new timeline would basically have pushed the project into the winter. And, the gear itself doesn’t like to operate at certain temperatures.

So, I started thinking: what is a “field,” what is a “sonicscape”? Also, what resources does Harvard have? And it was like: “Oh, they have tons of archives.”

A lot of people believe that nature is separate from humanity. But humans exist within nature, as do the things they create. So the Poetry Room’s archival recordings are snapshots of sonic ecosystems. And, in the archive itself, a sonic ecosystem is not just the area that you can hear—every sonic ecosystem is interconnected and is a full part of a larger cosmic sonic ecosystem. The field is not the physical space, it’s a different conception of what field means.

Was there anything specific about the voices of the poets you chose (Cid Corman, Carl Sandburg, Jack Kerouac, and Buckminster Fuller) that drew you towards them?

A lot of digital audio is pulled from dirty or desiccated records, so you get too many pops and clicks, but the Sandburg and Corman were recorded really well, and they also spoke at a rate that was really easy to sample. And when I say “really easy,” I probably spent at least 4 to 6 hours on each reading. It’s a tedious process to go through every single recording and figure out what (often less than one-second) clip is going to make sense for what I want to do. You have to be familiar with the original content, cut it down to what you think you might want to use, and then start building the virtual instrument sessions from there.

How do you turn these recordings into instruments?

I took the original audio and it [Ableton] analyzed the pitches and the perimeter of time, and then from that I was able to create these harmonic lines, and I’ve stretched them out further from their natural cadence. I’ve just mashed it, stretched it, contorted it, added feedback and delay and other things to really take it to the next level.

When you sample from poetry recordings, do the recordings retain any of the distinctiveness of human speech?

Yes, they do: it’s in the ends of words, or the middle. Cid Corman has really hard sibilance in the way that he speaks, and Carl Sandburg was very deliberate in his speech because he knew that it was being recorded. Sandburg and Corman make really good cymbals, because their S’s are “sssss.” So with that, you don’t really have to do very much to it. It’s a cymbal sound.

Buckminster Fuller had this really deep booming voice, so when you pitch it down a couple cents, it basically sounds like a bass drum or bass synthesizer.

Kerouac: that was some of the hardest audio, because you know that he was a person who needed some mental-health attention that he wasn’t getting. And it feels often like a schadenfreude circus show that we’re watching. And nobody’s helping, so it feels really tragic. And you can’t use most of his stuff because he slurs his speech—he’s drunk or high (or both) in almost every single sample. But when you stretch Kerouac, you kind of get these growly sounds, which are very metal sounding.

I’m from St. Pete, and Kerouac had a house in St. Pete. I find it funny that Florida is the birthplace of death metal, and when you pitch Kerouac down it sounds like death metal.

Have you picked up on any sonic energies that are specific to the Harvard context from which the archival recordings emerged?

In the Kerouac, you could feel the moderator was frustrated, there’s actually a point where he says, “Hey, why don’t you try reading some poems? We have this book by this guy named Kerouac, I think you might like it.” He was annoyed, but also nervous. There’s an awkwardness and nervous laughter in the crowd.

In all of these recordings, you can hear what’s going on outside—cars driving by, people coughing. Every single part of the ecosystem is contributing to the overall feel, and within that overall feel there are many dimensions. What humans want to consider nature, and what they want to consider separate from themselves, is actually a mirror of what is happening in the so-called human world.

How do the poetry recordings allow you to break down these dichotomies?

At the point at which I’ve entered these sounds into the big spaceship [the Ableton controller], now that they’re part of it, they’re the same as other sounds in the spaceship. They’re not any more special, they’re just sounds that are there, that can be accessed. So the power dynamic of the old dead white dudes that informed the creation of these things—at that point, they’re gone.

I’m not handling them with the reverence of the human voice. These are sounds, these sounds need to happen in that space.

How does your music disrupt this human-centered narrative?

I don’t see an audience as an audience in my performances, which aren’t performances—they’re really sonic rituals that people are there for. I see audience as a community of voyeurs. And this has become the most controversial statement of all time, because people are like: “I don’t want to witness: I want to be a part of it!”

I’m like, that’s exactly what a voyeur would say.

I’m there doing my thing. But I’m not doing it for the other people. It just so happens that I’ve left the curtain open… What is happening in that moment is not about entertainment and enjoyment for them. It is about connecting with energy.

And I have to constantly tell people, I don’t go in with an intention of an extra-sonic idea for humans to interpret. I can’t explain in human language what is happening sonically. If I could, I would just have poetry—and that would be it.

I’m saying: A sound can just be a sound, it doesn’t have to be co-opted by human narrative.