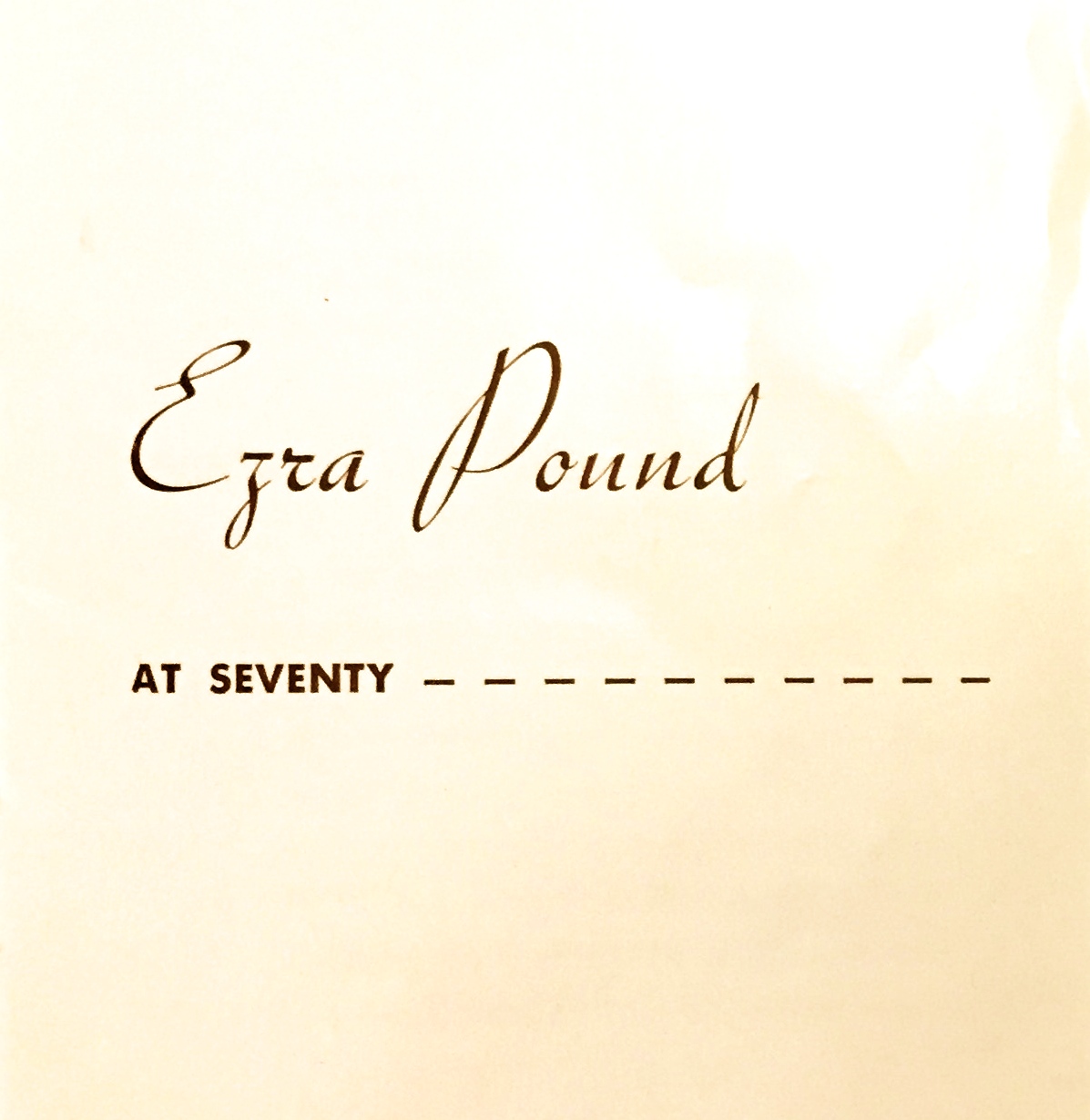 Sixty years ago, on December 5, 1955, the Yale Broadcasting Company (WYBC) aired “A Tribute to Ezra Pound” on the occasion of the poet’s 70th birthday. Far from your average three-score-and-ten jubilee, the montage was an effort to garner support for the poet’s release from St. Elizabeth’s Hospital. In the mid-1950s, similar appeals were being made over the airwaves via the Canadian Broadcasting System and the Vatican Radio (see J. J. Wilhelm, Ezra Pound: The Tragic Years, 1925-1972). Pound’s publisher New Directions also printed  and adapted many of the comments from the WYBC broadcast in its pamphlet Ezra Pound at Seventy (1955), which was (according to John Cohassey) published to bring attention to Pound’s recent works and “to further the cause of the poet’s freedom” after almost a decade of incarceration. Pound was released from St. Elizabeth’s in April 1958.

The irony of using a broadcast to advocate for someone who had been imprisoned for the content of his own radio broadcasts probably didn’t escape the participants, who included W.H. Auden, Ernest Hemingway, William Carlos Williams, Archibald MacLeish, Marianne Moore, Stephen Spender, Robert Penn Warren, E.E. Cummings, and (through comments read by the narrator) T. S. Eliot.

As of 1955, it’s fair to say that none of the participants had probably heard Pound’s original broadcasts. (“I have never heard a word that Ezra Pound broadcast during the war from Italy,” as Williams states in The Case of Ezra Pound). Many of them had however gleaned excerpts that had been relayed to them.

Since that time, the complete transcripts have been released in Ezra Pound Speaking: Radio Speeches of World War II (edited by Yale professor Leonard W. Doob, a scholar who focused on the social psychology of propaganda) and several of the recordings have been made available online through the Internet Archive, as well as on YouTube. (For an insightful study of Pound’s radio broadcasts and poetry recordings, I recommend the following talk by Richard Sieburth, as well as his comprehensive listener’s guide on Penn Sound.)

A decade prior to WYBC’s broadcast, Charles Norman approached several of the same participants to contribute character sketches of Pound to his upcoming publication, The Case of Ezra Pound (Bodley Head, 1948). At that time, Williams was frank about his reservations: “I can’t write about Ezra Pound with any sort of composure…. I want to forget that I ever knew him. His vicious anti-Semitism and much else have lowered him in my mind further than I ever thought it possible to lower a man who I had once admired.”

For the WYBC broadcast ten years later, Williams focuses primarily on Pound’s undergraduate and early expat years, recounting in vivid and vivisecting detail his first encounters with Pound at UPenn (“his twitch and his cough”),  his caped escapades (“he wore a big hat with a plume in….he was supposed to be Bertram de Born”), and the poverty of his early years in London:

Much more could be said about the complex nature of this broadcast, including the bold comments by Hemingway and Cummings and the more subtle analyses provided by Spender and MacLeish—not to mention the media archeology of the recording itself, its combination of several sonic technologies (including radio, phonecall interviews, and poetry recordings taken from phonodiscs). We invite your insights and scholarly commentary.

As a part of its continuing effort to preserve early- to mid-20th century recordings, the Woodberry Poetry Room has recently digitized the reels of this broadcast and has included time-stamps below for the primary topics that are discussed. The complete broadcast is available on our Listening Booth for non-downloadable scholarly use and a transcript of the entire program is available at the Beinecke Library, Yale University (as well as other repositories around the country).

As with so many of the non-Harvard recordings in our collection and under our care, the provenance of this particular series of reels is unclear. It’s likely that James Laughlin (or the producers of the Yale broadcast) sent a copy of the reels to the Poetry Room as a courtesy in return for our granting WYBC permission to use the Harvard Vocarium recordings of Pound in the broadcast. Interest in those recordings had begun to grow in the late 1940s and early 1950s: made in 1939, during one of Pound’s rare stateside visits, the recordings were never officially produced by the Harvard Vocarium due to the ensuing outbreak of WWII, shortages of materials to make records, lack of funding, and the subsequent political and permissions-related issues surrounding Pound.

In a letter dated 20 April 1951, housed at the Harvard Archives, Hugh Kenner wrote to Harvard Vocarium founder Frederick C. Packard that “a correspondent of mine at Harvard informed me that you had in your record collection a 16” recording by Ezra Pound, made in 1939 or so from The Cantos and other poems.” From letters and notes in the Harvard Archives, it’s clear that Packard strove diligently throughout the early part of that decade (through correspondence with Dorothy Pound, then in control of Pound’s estate, as well as with Pound’s agent) to succeed in making copies available to scholars and other libraries. The inclusion of some of the recordings on this WYBC broadcast suggests that he did make significant progress (with regards to accessibility of these recordings) by the mid-1950s.