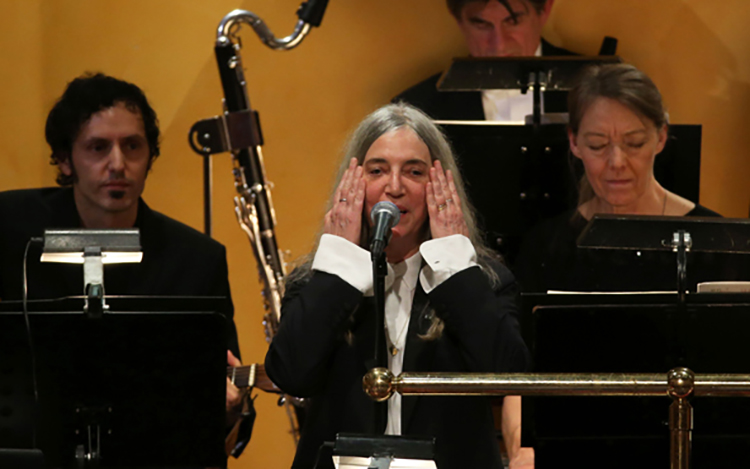 Never should I forget that in the middle of the road
there was a stone….   Carlos Drummond de Andrade

Poet and singer-songwriter Patti Smith’s recent magisterial performance at the Nobel Prize ceremony—in which she interrupts her own rendition of Bob Dylan’s “A Hard Rain’s A-Gonna Fall” and takes a moment to apologize for her nerves—offers us a chance to reflect upon and celebrate poetry’s role in an increasingly mechanistic society.

What poetry provides us is precisely such instances of interruption, of breakdown: the surfacing of something vulnerable, veracious, throated and whole, something that destabilizes the “streaming” to which we’ve become accustomed and that interrupts the ceremonial and monotonous system, even as it acknowledges the existence of a (and our) nervous system. Poetry: the noble pause, the idiosyncratic kink, Drummond de Andrade’s stone made vocal and known to us.

Here at the Poetry Room, Smith’s performance makes me think of a recording we recently digitized from master reels, called “R. Buckminster Fuller Thinks Aloud” (Credo, 1967, recordist: Stephen Fassett). In it, the great futurist and humanitarian Fuller—also, a poet in his own right— waxes about the early (unpredictable) days of the machine and the residual humility it evoked in him.

At that time, he reminds us, breakdown was the given; a smooth journey, a perfect delivery, a stable signal—those were the exceptions.

When I was born near here in Milton, Massachusetts, in 1895, the beginning of automobile manufacture began out west but we didn’t hear anything about it in Milton. And not until I was 7 years old did I see an automobile. When I was 9 years old, the aeroplane was invented. The radio had been invented when I was born, but not until I was about 10 did some of my friends begin to try to make amateur sets and sooner or later we began to have word of the SOS being used at sea.

I was born, in other words, well before the present era’s mechanization. In fact, an engine seemed to me quite an unreliable affair, ’cause I used to have to crank and work on them so much. So that I have never have come into the frame of mind that assumes that all machinery will work very well. I notice that the young people today assume that [it will]….

In the mid-20th century, similar assumptions were being made about spoken-word sound recordings. Though human speech had only been rendered “immortal” (and mechanically transmittable) via the invention of the phonograph in 1877, by the 1940s many listeners had come to expect technical perfection. The recording industry operated much like the book publishing industry in ensuring that a produced disc was (largely) flawless: there were retakes upon retakes, test pressings upon test pressings, so that no textual slippages, no falterings or coughs, nothing remained that would suggest a reading’s temporal as opposed to its timeless existence. And, while the poems being recorded often spoke of fragmentation and breakdown, the recordings themselves—as material objects—conveyed sonic unity, fluency and stability.

For poets like T. S. Eliot, the era of sound recording brought with it a fear of the ossification around error, an anxiety that the lacquer disc would forever embed and immortalize a mistake. During a reading on Dec. 4, 1950, Eliot acknowledges his preference for the polish (and self-protection) of studio recordings:

I took a good deal of trouble, especially over the Four Quartets, because I did that in London, one afternoon a week for three months, but that was partly due to I had a cold and sometimes in that winter the electricity current wasn’t strong enough and sometimes somebody broke one of the records, but more because after hearing it I usually wanted to do it over again. But I think a good recording, the ideal one I found I was aiming at… was not to make any mistakes, because if you make a slip in a record everybody will know where it is and their nerves will be on edge every time they put the record on.

He was not alone in attempting to perfect his recordings. In many of the outtakes we’ve discovered through our recent survey of over 2,500 previously uncataloged Packard Collection discs—such poets as Ezra Pound, Weldon Kees, Marianne Moore and in some cases the audio engineer himself can be heard to exclaim some variation of, “Call that off, it’s no good,” or “Sorry, kill it!”. Which is to say, we can hear the authors taking audit of themselves and of the performance. (Bear in mind that for many Modernist poets, the making of an audio recording was the first time they had ever heard their own voices, let alone assessed their mode of reading a poem aloud via playback.)

In the 1930s and early 40s, when recording equipment was sparse, and poetry-recording labels even sparser, there was a sense that a poem might only be recorded once and therefore had to be an “authoritative” reading. This pressure on a single recording did, according to Eliot, create tension and a lack of vitality “because one is so occupied with not getting anything wrong […] somewhat a check to letting oneself go….”

As recording technology became more inexpensive and available (in the 1950s), authors began to have the chance to record the same poem multiple times and in a variety of venues and situations (and moods and states of mind): in recording studios, at home, as well as in live reading venues as chaotic and cacophonous as a crowded bar and as solemn and lofty as a museum or symphony hall. Gradually the recording of a poem could afford to “let go,” and to include fallibility, accident, chance, verbal slippages, and the particularities of a reading’s context: laughter, traffic noise, drunkenness (authorial or otherwise), the sound of a cigarette being put out near the mic, coughs from the crowd. All of that began to comprise the recorded poetry reading.

And, as we reached the very period that Buckminster Fuller was discussing—the 1960s and beyond—when the mic and recording equipment were easy to come by, when it was possible to enter “the frame of mind that all machinery works very well,” many poets and performers began to use that technology to create a cultural counterpoint to the parlaying of a perfect sonic product.

In fact, you could say that live poetry readings (as they grew increasingly recorded) became a space to test poems and to experiment with their soundings—-rather than to render them in all-perfection for posterity.

In his 1962 Morris Gray reading at Sanders Theatre, Harvard University, Charles Olson offers us a terrific example of the performer fearlessly interrupting a live recording to take audit (procedurally) of the poem. He interrupts himself not to erase what had come before, but to admit us into its happening, to involve us in his co-existence with the poem “as it rides….” Like Smith, he doesn’t attempt to hide the stumbling (in fact, he announces it), nor did he ever ask for it to be removed from the recording, he merely stops his reading of “Maximus to Gloucester” to say:

“Excuse me, I’ll come back to it. I’ll try one which rides…”

And then, on starting the next poem, “Maximus, from Dogtown II,” Olson again intercedes on his own internal critic’s behalf and says: “Oh, that isn’t going, either. All right, don’t like that one. Better lay off that Maximus for a while.” Later in the reading, he resumes and finishes the poem, but by having admitted us into the interruption, by allowing us to experience that pause, some larger circulation has occurred.

So too with Patti Smith’s Nobel Prize performance, a performance in which that human moment is magnified like the eyes of the child it describes, there is something magnanimous in that pause, there is an acknowledgment of an ideal to which the poet was/is aspiring (what is aloud and what is allowed to us?) and it is then that something unpredictable, permissive, and unmechanical emerges. Something we might call: the benevolence of the real.