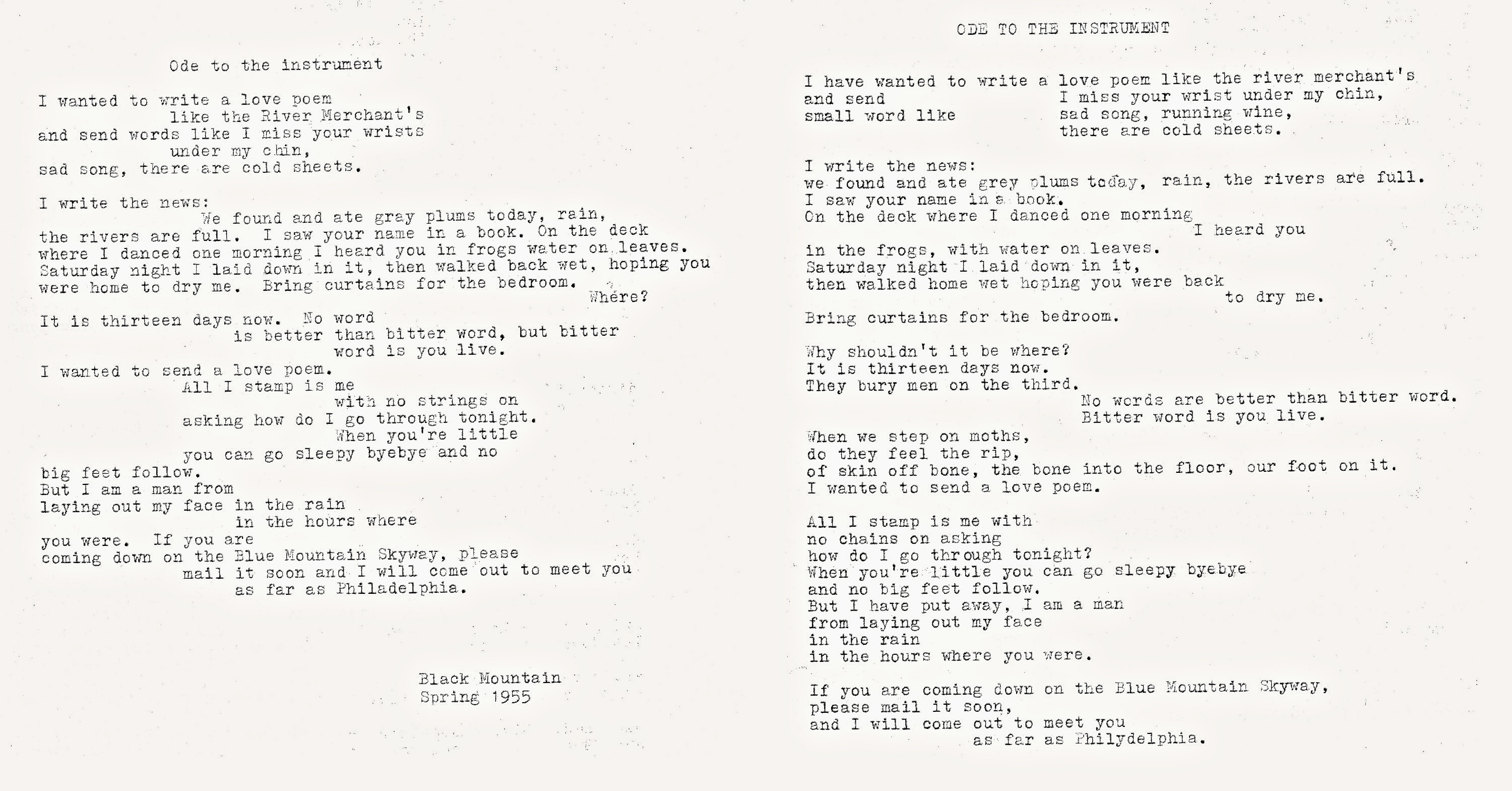 In conjunction with last week’s Oral History Initiative: On John Wieners, the Woodberry Poetry Room digitized a previously uncataloged disc (likely Wieners’ first recording) made at Fassett Studio in Beacon Hill in March 1962. For access to the entire recording, visit the Poetry Room’s Listening Booth. We also invited Robert Dewhurst, the emcee of our oral history, to reflect on one of the poems in the recording….

“Now a poem from Black Mountain, written in 1955,” begins this affecting recital of “Ode to the Instrument,” recorded for the Woodberry Poetry Room at Boston’s Fassett Studio in March 1962. The crystal-clear track is the only known recording of this uncollected early poem, in which Wieners’ later lyricism—his soft-stated allusiveness and lovesick, apostrophic poise—can already be heard lifting into place. The poem, written during Wieners’ first month at Black Mountain College, also marked a sea change in his dawning, elemental friendship with Charles Olson.

“Ode to the Instrument” dates to mid-May ’55. A letter home to a Boston friend, punched out on the typewriter May 24th, reveals the scene of its debut in Charles Olson’s writing class, in a rapturous rush of detail. To Robert Greene, a schoolmate from Boston College, Wieners writes:

I have to answer your letter right away, even now when I should be writing [poems], and the main reason is because I feel so elated by it, and also by another writing class last night. I brought in two poems, a love poem, which begins, “I have wanted to write a love poem like the river merchant’s”, and another, an address to Hart Crane, and Harry Crosby, two suicides. I did not work hard on them, especially the suicide one, as it was written while I am stinking on Friday, and written while I was in tears up to my knees. I brought them to class last night, read them in my turn, there were so many manuscripts we all read them one after another, and then waited, me sure that they were a failure and a dis-appointment to the ones of the week before. They talked for an hour on two poems of Mike Rumaker’s, and then a boy asked to read mine again, and then he commented that he liked them, and I asked a question: I would like to know how I can stop writing poems like this: Olson laughed and laughed, he said you never can, and you better not. He asked me what I meant, and I answered with: preoccupation with myself. The class then launched into them. In a second, failure is turned into success, at least for other people. Olson then began answering my question. I don’t remember what he said in quotes, but he talks about the intensity of me, me John Wieners, the desire, the trouble in the poems, that the use of language is my image, on and on, talking as if I am a poet, possessing the talent to convert experience into form. We went to [Ma Peak’s, a local tavern] afterward, and I could hear him talking up the other end of the table about the emotion in the poems. When we went up to pay the bill, he came over and thanked me for the night. I was writing to Dana this morning, at about 10:30 and he came in, and talked with me for two hours, talked not in the way that if you work hard you will be a poet someday, but that if you work hard you will be a better poet than you are now. He asked me to write 5 different poems on the same subject: “the river merchant” it’s an allusion to Pound’s translation [of Li-Po’s “The River Merchant’s Wife: A Letter”] that we loved so much in Boston . . .

While writing the letter, Wieners was interrupted by Ed Dorn, who dropped in on his lodgings in Streamside, a campus cottage he shared with Joe and Carolyn Dunn. The two stepped into the yard for a cup of tea with Ed’s wife, Helene . . . when who should then appear but Olson, toting a fresh manuscript of his own—“The Post Virginal,” for John Wieners. A few hours later, John returned to the typewriter to finish his letter to Bob Greene and reflect on this offering. Absorbing an eventful couple of Black Mountain days, he exhales:

You know how I feel. How does it happen, why has it happened, I’m not even trying to find out. I just know now that as long as I live I will be a poet, that my life, way of and function of, will be the writing of poetry, as long as it lasts. Yesterday over the cliff, today on top of it.

Reports like this one in Wieners’ letters of the ‘50s add a more tender touch to other accounts of Olson’s mentoring as macho or brash—and as unilaterally opposed to poetry of personal feeling, which he sometimes disparaged as “wretched lyricism.” Rather, Olson intuited that Wieners’ emerging interest in tackling troubling subjects of personal desire, longing and loss—in the case of “Ode to the Instrument,” all encircling his Boston boyfriend, Dana, later an absent presence in The Hotel Wentley Poems—merited gentle guiding, needing to be nurtured and drawn out.

Olson’s influence on Wieners was less as a poet, directly, than as a lodestar and licensing force—someone whose unconditional friendship and unpatronizing counsel went a long way toward helping John feel he had a valid “poetics” and subjects of his own. (As Robert Duncan once remarked of Olson’s tenure at Black Mountain, “Charles as a teacher did not produce little Charleses.”) After Olson’s death in 1970, Wieners retrospectively imbued his early exchange with “The Big Man on the Mountain” with consecrational gravitas, writing succinctly: “Big Charles put his hand on me, and ordained me a priest.”

“Ode to the Instrument” was published in two versions in Floating Bear, No. 10 in 1961, neither of which match this 1962 recording word-for-word. A 1955 typescript for the poem is also preserved in Michael Rumaker’s papers at the University of Connecticut. Wieners’ poem about Hart Crane and Harry Crosby first appeared in the same issue of Floating Bear, as “That Old Gang of Mine,” before a substantially revised version was printed as an untitled broadside by the Artist Workshop Press of Detroit in 1966.

Wieners’s correspondence with Robert Greene is preserved in the John Wieners Collection at Boston College. For more primary documents on the Wieners–Olson relationship, see “the sea under the house”: The Selected Correspondence of John Wieners and Charles Olson, edited by Michael Seth Stewart, published in 2012 by the CUNY “Lost & Found” Poetics Document Initiative.