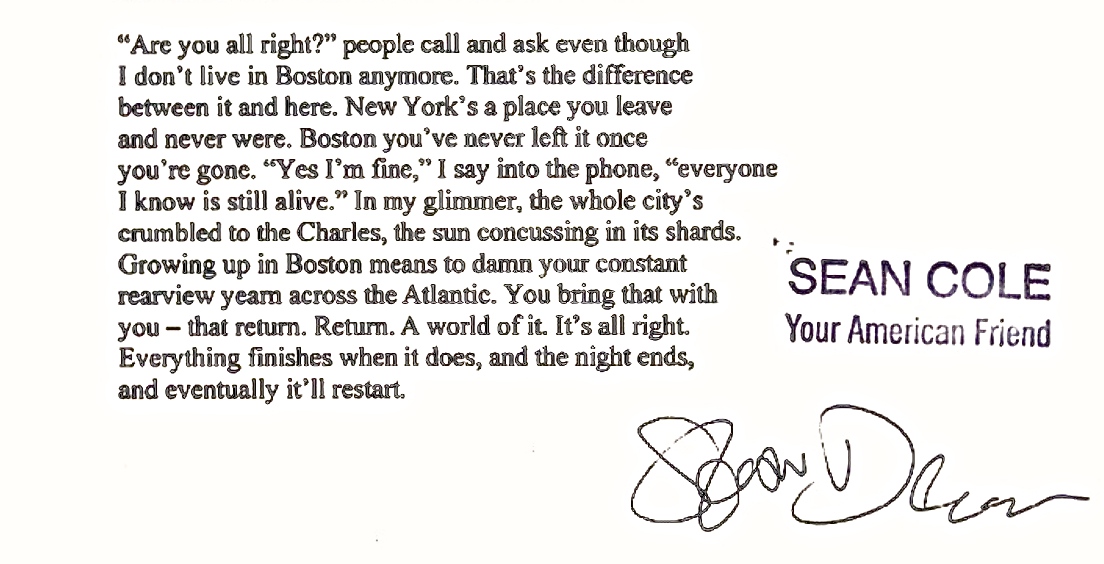 The Woodberry Poetry Room is pleased to announce a new online series called BOSTON ORIGINALS—a celebration of poets who hail from, dwell in, or write about the greater Boston area. Each BOSTON ORIGINALS post will feature a brief reflection on a Boston poet’s work (or interview with the poet) and an audio or video recording. The Poetry Room wishes to thank Audrey Mardavich (and videographer John Mulrooney) for generously agreeing to contribute to this inaugural post.

I have been an admirer of Sean Cole’s work as a poet and as a radio producer for many years. He is a superb thinker: he can be irreverent when it matters most, he is inventive with his images and sounds, he is very funny and probably has the best laugh of any poet around. He brings that to every poem and every radio story of his I’ve heard. This poem, in particular, especially reflects that spirit.

‘Are you alright?’ people call and ask, even though
I don’t live in Boston anymore. That’s the difference
between it and here. New York’s a place you leave
and never were. Boston you’ve never left it once
you’re gone.

“To Acropolis” was written for Bill Corbett’s For One Boston, a collection of poems and artworks that was created to benefit the survivors of the bombing. Fanny Howe called the project “a collision of histories, local and global. The papers fly, the paintings and signatures mark the trails from Boston to Dagestan.” One of the boxes, each of which includes poems, paintings, photographs, and collages totaling 132 works from 149 artists, was purchased by the Woodberry Poetry Room and is available to the public on request at Houghton Library. 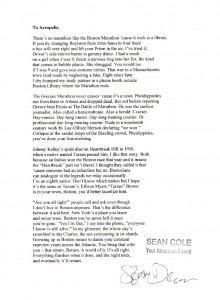 Cole manages to exemplify this “collision of histories” in his poem by taking us time traveling, making us laugh with stories of his own teenage debaucheries as well as with tales of former marathon winners. And yet later in the poem, he seamlessly moves us to reflection – “In my glimmer, the whole city’s/ crumbled to the Charles, the sun concussing in its shards.”

He writes, “Growing up in Boston means to damn your constant/ rearview yearn”—the magnetic draw known to Bostonians that prevents many of us from ever leaving, or brings us back to the city we promised we’d left this time. Or as Cole writes, “that return. Return. A world of it. It’s all right.”