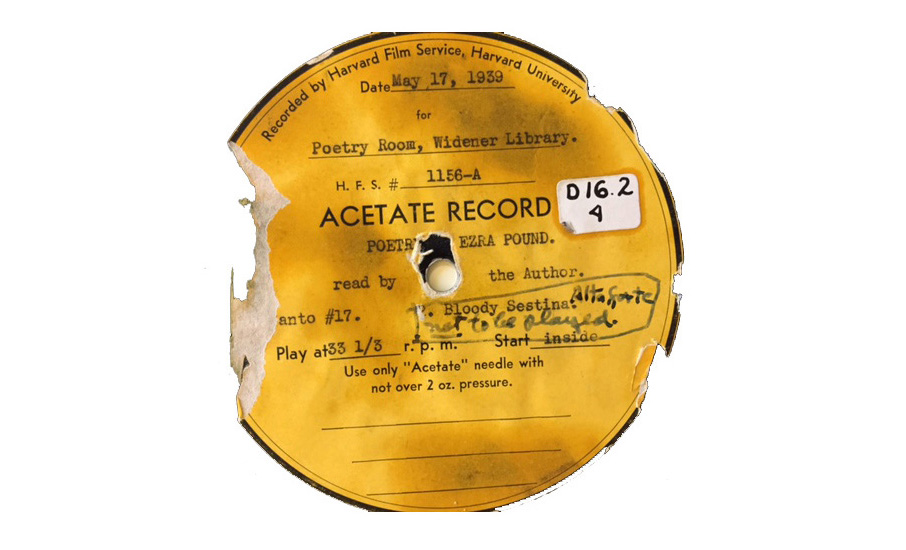 On October 8, 2015, the Carpenter Center for the Visual Arts and the Woodberry Poetry Room welcome you to the opening reception for “Not to Be Played,” a multifaceted exhibition featuring archival materials, a musical performance, and the publication of a vinyl disc that together revive an audio recording made by Ezra Pound at Harvard University in 1939. The opening reception will feature a brief curators’ chat with Damon Krukowski, facilitated by Matthew Battles (author of Palimpsest and Associate Director of metaLAB).

“NOT TO BE PLAYED, OR TRANSCRIBED…” Ezra Pound writes emphatically in an October 1955 permissions note to Yale professor Norman Holmes Pearson, in conjunction with that year’s WYBC broadcast “A Tribute to Ezra Pound”. The radio program was a part of a larger effort to secure Pound’s release from St. Elizabeths Hospital, where the poet had been held since 1946 as a result of his “treasonous” (and anti-Semitic) wartime broadcasts, which the U.S. Federal Communications Commission began monitoring in 1941 and recording in 1942. [1]

Pound’s prohibition was directed at a single poem: “Sestina: Altaforte” (a.k.a. “Bloody Sestina”).[2] 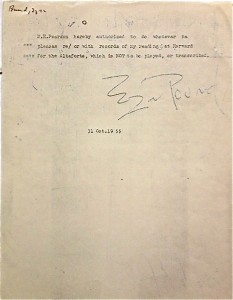 Recorded only once in the poet’s lifetime: on a single day (May 17, 1939) in a specific place (a “small transept” of Memorial Hall, Harvard University) by the pioneering founder of Harvard Vocarium records, Prof. Frederick C. Packard, Jr., this bellicose dramatic monologue was recorded in a hall constructed to commemorate dead soldiers, a hall devoted to memory itself, much like the then nascent technology of sound recording. [3]  As the Scientific American declared when Edison’s phonograph was first released: “Speech, as it were, is now immortal.”

The potential immortality of speech proved to be a double-edged sword for Pound, whose interest in suppressing this recording has been attributed to his hyperbolic belief that the poem (first performed in 1909, first recorded in 1939) had directly or indirectly provoked the violence of WWI and WWII.

But given the 1955 efforts to attain Pound’s freedom, the poet’s concerns may have been more practical than superstitious: the broadcasting of a poem featuring such lines as “Damn it all! All this […] stinks peace” was not likely to inspire the U.S. government to release him.

Since that date in May 1939, material history and social history had conspired to keep Pound’s Vocarium discs unproduced. Due to a combination of wartime shortages (“war priorities prevent producing the regular shellac pressings”), a chronic lack of Harvard funding for the Vocarium (“what we need is money for processing some excellent discs we have made this year … three of Ezra Pound” [4]) and the subsequent challenges presented by Pound’s postwar incarceration and his legal guardianship by Dorothy Pound, the three 16” lacquer on metal discs remained in a suspended state for decades. 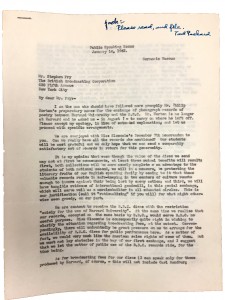 Outwardly adhering to the “Altaforte” taboo, Packard and successive Poetry Room curators nevertheless actively engaged in playing and transcribing the recordings (in the confines of the library), recommending them to Harvard faculty (the discs are listed as “recommended poetry recordings” in a 1946 bibliography for English A, the primary composition class at Harvard [5]) and attempting to preserve them (Packard mentioned the discs in a 1942 memo to the BBC in an effort to establish a war-time exchange to save the “literary fruits of our English-speaking family”; they were, however, never shipped).

In many ways, to adopt a phrase from poet Peter Waterhouse, the “not-saying”—or the not-playing of these discs—“became language.”

During the postwar years, word of their existence gradually spread beyond the gates of Harvard. In 1951, the young scholar Hugh Kenner (future author of The Pound Era), who was then in the midst of publishing The Poetry of Ezra Pound, wrote to Packard and WPR curator John Lincoln Sweeney: 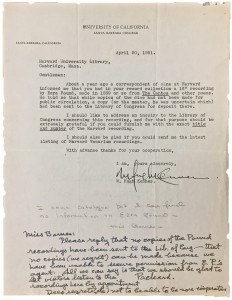 “Gentlemen: About a year ago a correspondent of mine at Harvard informed me that you had in your record collection a 16” recording of Ezra Pound, made in 1939 or so from The Cantos and other poems. […] not for public circulation”

In response to a growing number of requests, Packard resumed his attempts to produce the records: this time, writing directly to Dorothy Pound for permission. He received a “flat refusal.”

On 27 July 1951, Packard wrote optimistically to Huntingdon Cairns (at the National Gallery in Washington, D.C.) that Marshall McLuhan had received tentative permission from Pound to produce a commercial recording of “The Seafarer” and “Canto 56.” But, Packard noted, “Harvard has no funds.”

In 1955, Harvard College Library formally withdrew its financial support for the Harvard Vocarium. Packard retired from Harvard in 1965.

Much like the transmission of suppressed manuscripts, access and preservation activities persisted for decades behind the scenes, contributing to a cumulative momentum: transferred onto magnetic tape in 1956 and remastered again in 1974, dubbed onto compact cassettes by WPR curator Stratis Haviaras (who “respected the poet’s [original] request … and made cassette copies for playing without ‘Altaforte’”), the recordings were finally published in 1978 after Pound’s daughter Mary de Rachewiltz “showed up in the Poetry Room, listened to the entire 1939 recording, and gave me [Haviaras] permission to include ‘Altaforte’ in The Poet’s Voice, a cassette collection published by Harvard University Press.” (Interestingly, these tapes were released the same year that Leonard W. Doob’s Ezra Pound Speaking: Radio Speeches of WWII began to make known the actual content of Pound’s wartime broadcasts, themselves somewhat silenced by the material history of broadcast technology in which instantaneous discs were rarely retained). The 1939 recordings made their journey from analog to digital in 2006, when WPR curator Don Share oversaw the transfer of the deteriorating reels to .wav files and subsequently shared the files with PennSound. 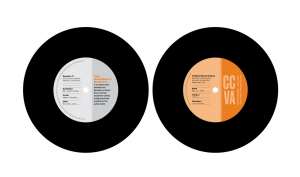 From these digital files, the recording of “Sestina: Altaforte” was at long last produced in something approximating its originally-intended analog format, when a 45-rpm vinyl disc was created for this exhibit. [5] The recording includes the injunction “not to be played.”

Endnote: While preparing the materials for this exhibit, the remarkable audio engineers at the Media Production Center discovered what they believe to be subtle (intentional) gouge marks on the 16″ lacquer “not to be played” disc (the label of which is inscribed with Pound’s prohibition in Packard’s hand). While any number of reasons could be assigned for this, it’s possible that they were placed there to prevent the record, which played from the inside out, to proceed to “Altaforte.” Several recordings in the Poetry Room’s collection include gouge marks, a reminder that -graph (writing, inscription) remained very much a part—sometimes even a literal part—of the modernists’ (and their audio technicians’) relationship to the phonographic medium.

[2] In other versions of the story, Pound insists that the recording was “not to be played by anyone the hell ever,” and even goes so far as to insist it be “destroyed.” (Charles Norman, Ezra Pound, 366). The photostat of the Pound note was sent to WPR curator John Lincoln Sweeney by Norman Holmes Pearson in a letter dated 31 January 1956. Pearson had procured reel-to-reel copies of Pound’s 1939 recording from the Poetry Room for the purposes of the broadcast.

[3] Ezra Pound visited Harvard University under the auspices of the Morris Gray Lecture series, at the invitation of Theodore Spencer, then an assistant professor in the Harvard Department of English. Packard was in attendance at the public reading in Sever Hall on May 16th (live poetry readings didn’t begin to be recorded at Harvard until the mid-1940s) and invited him to make his Vocarium recordings the following day.

According to the Harvard Crimson, which interviewed Pound in advance of his visit, Pound’s repertoire for the Morris Gray reading included “as many of his unpublished Cantos as the hour lecture will permit him to, beginning with the fiftieth. He has with him, in the series which is finally expected to include 100, the poems numbered from 50 to 71.” (“Ezra Pound, Well Known Author, to Read Poems Here,” The Harvard Crimson, 16 May, 1939). The Vocarium recording session—for which Packard procured Pound two kettle drums—extended well beyond the hour-mark and featured Cantos XVII, XXX, and LVI, “Cantico del Sole,” “Homage to Sextus Propertius,” “The Seafarer” and “Sestina: Altaforte,” among others. In a letter dated 18 May 1939, Pound recounted the experience to his partner Olga Rudge: “Waaal, he spent 2-1/2 hours in abserlewtly airless room bellowing his cantos into a microphone for grammy-phone record. Wiff 2 kettle drums at his disposal and the auidence (i.e. technicians and a few of Eng. Dept.) apparently deeply appreciativ” (Moody, Ezra Pound, Poet: The Tragic Years, 1939-1972, Vol. III, 153).

[5] Poets who taught this course included Delmore Schwartz and John Ciardi. In his memoir, Donald Hall (’51) recalled listening to the Pound discs during his undergraduate years.

[6] Special thanks to New Directions Publishing Corp. for their permission and support.