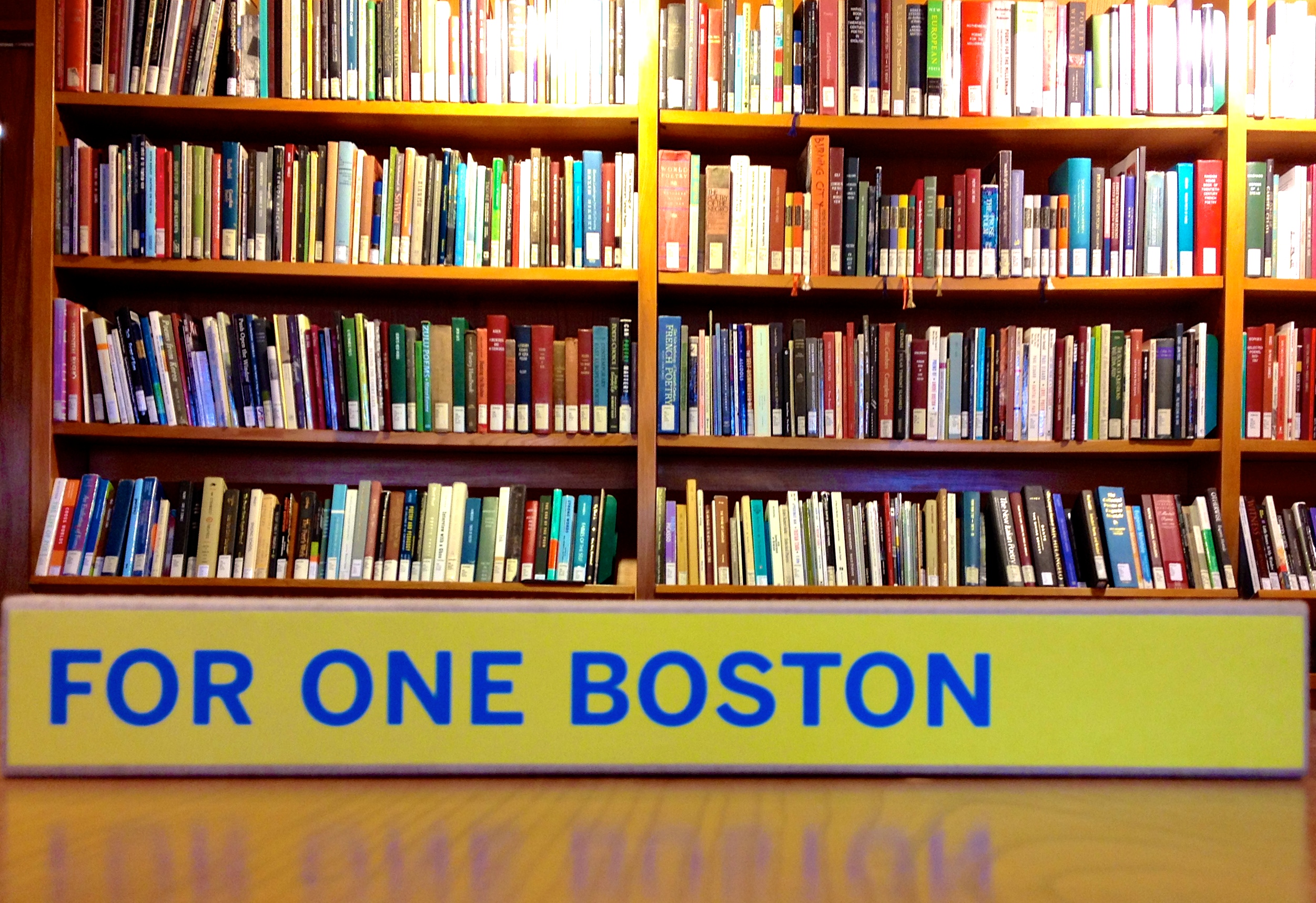 From February 2 thru May 1, 2015, the Woodberry Poetry Room will present an informal mini-exhibit featuring a rotating series of selections from “For One Boston,” a collection of 132 works—by 149 artists, writers, designers and printers—published by Pressed Wafer in collaboration with Granary Books to benefit those injured in the April 15, 2013 Boston Marathon bombings. 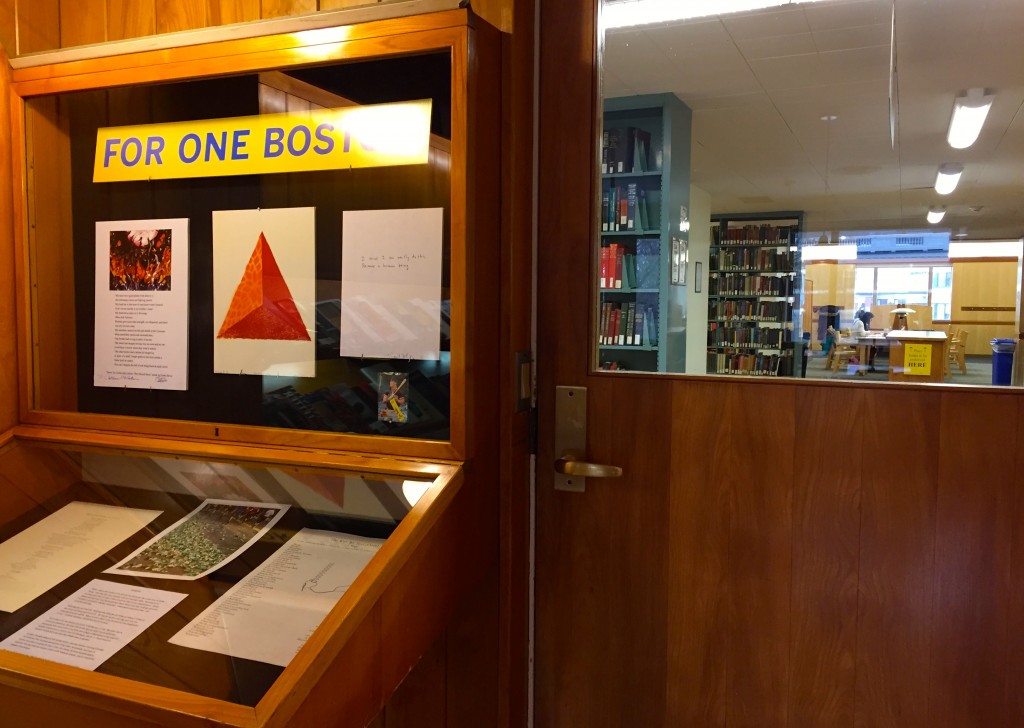 The deeply compelling, poignant and provocative materials that converge in the “One for Boston” box reflect a dynamic range of responses, what one of its contributors, Fanny Howe, calls

“a collision of histories, local and global. The papers fly, the paintings and signatures mark the trails from Boston to Dagestan.”

Of her contribution, “Prayer for Someone,” poet Jennifer Tseng reflects:

“I wrote this poem expressly for the box. It took me a long time. […] I began with the impulse to honor the victims; I wanted to salvage things about them. So the poem is fueled by love, by my desire to acknowledge the lives and suffering of others, but it is also fueled by anger, by my desire to counter those who equate acts of terror with Islam. The poem struggles to make sense of what it means to be human. What does it mean that both the victims and the murderer have family members, people who love them? What does his act do to them? What does it do to all of us?” 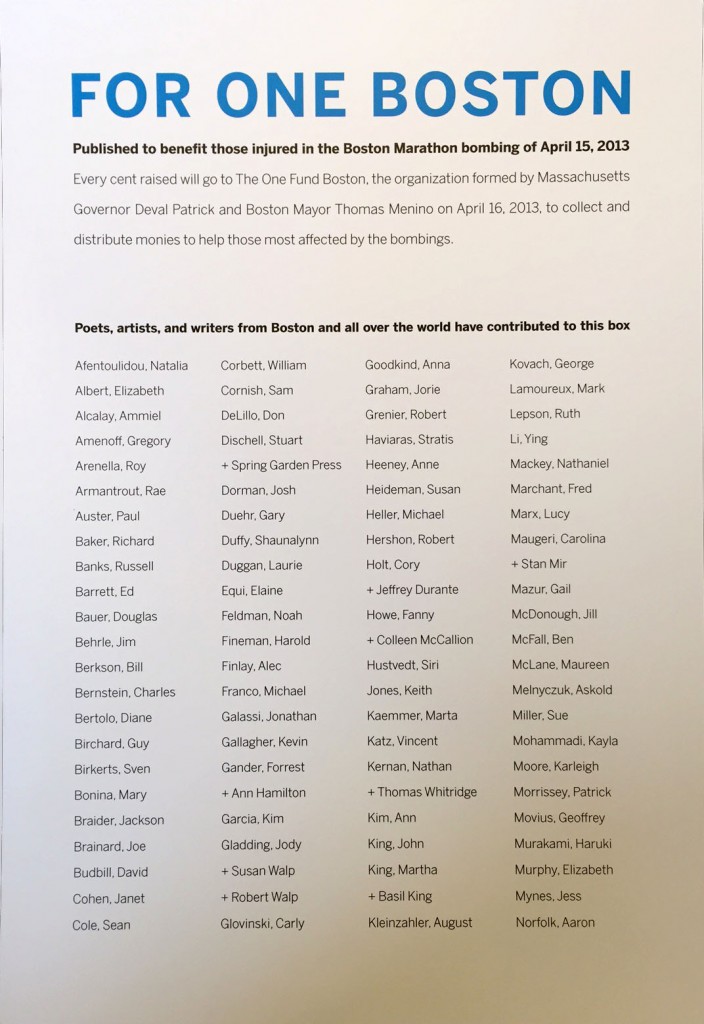 After the bombings, poet, publisher & long-time Boston resident Bill Corbett sent out a call to over 150 writers, painters, designers and printers from around the world to contribute to this generous initiative. Among those who responded were: Rae Armantrout, Russell Banks, Jonathan Galassi, Robert Grenier, Nathaniel Mackey, Fred Marchant, Gail Mazur, Maureen McLane, Haruki Murakami, Rosmarie Waldrop, Elizabeth Willis (and the roll-call of impressive participants goes on). The edition that Corbett ultimately produced consists of 26 copies, housed in radiant boxes designed by Sarah Creighton, featuring:

“As Boston struggles to impanel a jury and bring the surviving bomber to trial,” states Corbett, “the box displayed at the Woodberry Poetry Room is testimony to what a community of artists can do to provide for those who had the terrible luck to be innocently cheering on Boylston Street that April afternoon.” 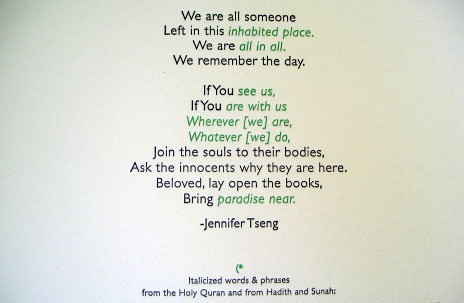 CURATOR’S NOTE: Due to fragility, some items on view are foam-core copies of the originals. Those wishing to encounter the “For One Boston” box in its entirety are welcome to make an appointment at poetryrm@fas.harvard.edu.