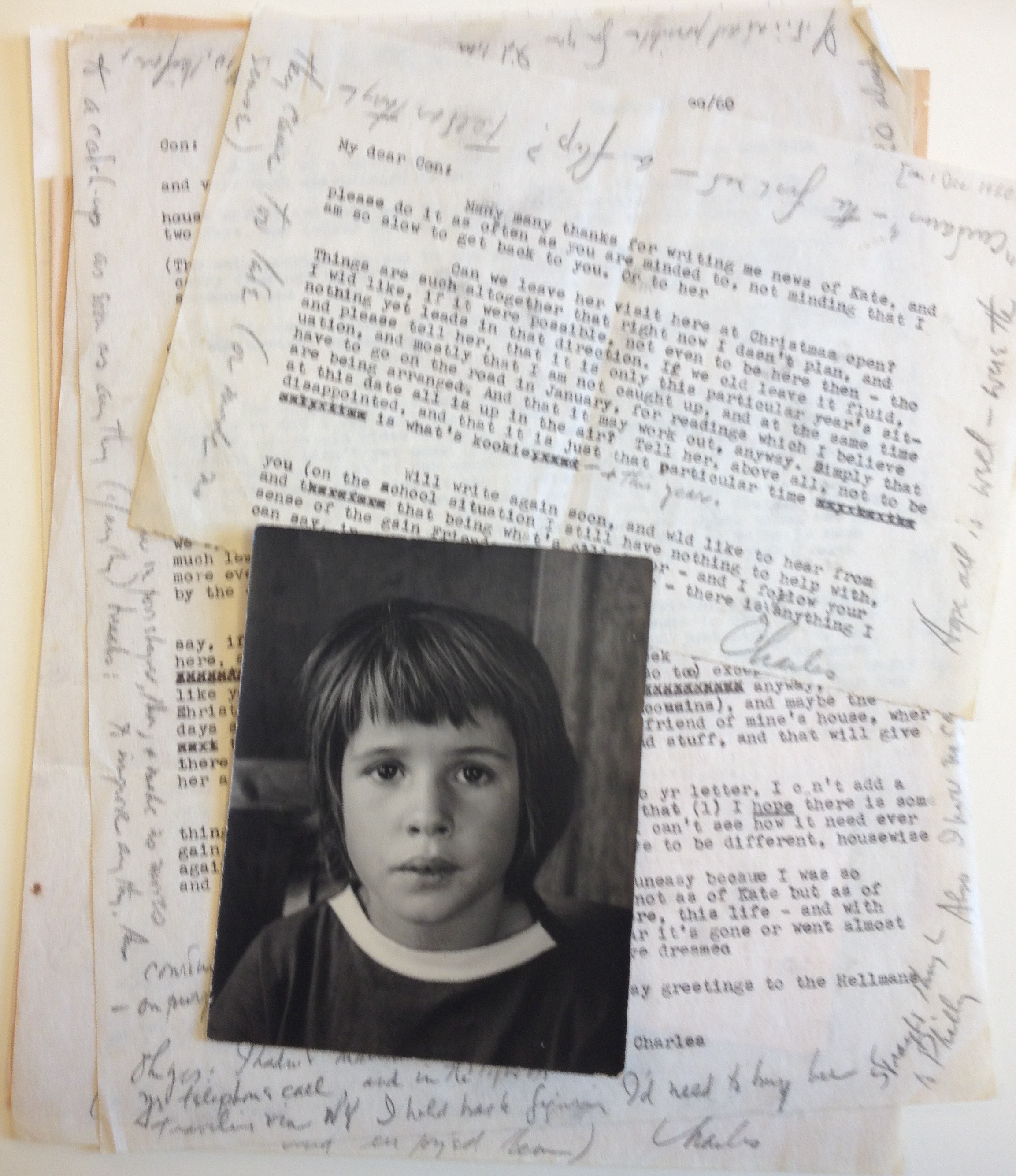 Virginia Marshall: Okay, we’re going to start over. Hey, Melanie.
Melanie Wang: Do you want me to say my name again?
VM: Sure, yeah.
MW: Melanie Wang.
VM: Great. Um. So, last summer, what were we doing?

This story will hopefully take you to a few different places. It will use audio from files and cassette tapes that people mailed or emailed to each other. So you might be thrown around a bit. This episode is about writing and recording letters and poems. I’m Virginia Marshall and you’re listening to Reel Writing: Poems and Prose off and on the tape real.

Now, here’s my friend Melanie to tell you about our version of letter writing.

MW: So last summer, I was in Chicago and you were in Boston. And we sent each other recordings back and forth the whole summer.

MW: Each recording started with whoever was sending it talking about where they were—

I am sitting in a conference room in Knox Hall at Columbia University.
Right now, I am in my backyard.
I’m driving through the south side of Chicago.

MW: and what they were doing—

We’ve been training for the past couple of days.
About to fly to JFK and then Boston.

MW: and maybe what had gone on that day or that week—

My grandma and mom are walking ahead. I think they’ve forgotten about me.
It’s 1:18 in the morning. I’m making a recording for you because I can’t sleep.

MW: and we reacted to things each other said.

You sound really nervous about this project that you’re doing.
Recordings that happen before sleep are probably pretty insightful.

We sent these recordings—which you just heard snippets of—back and forth to each other the whole summer. Melanie was working in Chicago, and I was in Boston. But we never thought of them as letters—we were just pressing ‘record’ on our phones, talking a bit, and then emailing the audio file. Looking back on those recordings now, a year later, they shaped a lot of how we remember different events. Here’s Melanie again, when we met up to talk about the recordings.

MW: Making those recordings and listening to yours and thinking about how to respond changed the way I perceived stuff that summer. Right? Because it was sort of like another lens to put on things. And also—I mean, in the simplest way, right, like paying attention to… [background noise] in the simplest way I was paying attention to sound in a way I probably would not have at all.

Melanie and I also used each other as a sounding board to compose ourselves and understand what was happening to us. And emailing the recordings to each other meant that we had to shape our thoughts and make them presentable. You had to say ‘hello’ and ‘good-bye’ and keep the listener in mind constantly. Our little monologues naturally took on the form of a letter.

Charles Olson: Hi, Robert. And thanks, Bobby, for this whole business. Because it’s nice to come in on you like this. And as you know I’m in Gloucester, but you wouldn’t know that I’m up on one of the highest hills at Dr. Cohen’s house, reading this. So I’m going to start out—his son is listening too—and I’m going to start ah, with what’s a—ah, what do you call it—a real political poem of Gloucester itself.

While listening through archived recordings of poets at the Woodberry Poetry Room this summer, imagine my surprise when I stumbled across this recording by the Gloucester-based poet Charles Olson. Here is an example of a tape letter—a recording one person would make on a cassette tape and mail, through the good old US Postal Service, to another person.

John Burke did not rise
when Councilman Smith, nor had he signed
the complimentary scroll
handlettered
by Franklin E. Hamilton…

…lives torn
by inspectio
and judicium, the judge
or mischievous woman
who make hob
of us) sweat, Burke
sweat, indubitably…

Finding this gem of a recording reminded me of the audio files Melanie and I sent to each other.

CO: I want, shortly, to read you a group that I think is—that I made up last night as a sort of a little book.

There’s a self-consciousness about Olson’s reading. He stumbles, he references other poems that he has written, as if he is not sure how this one will compare. He is using Robert Creeley and the tape letters to sound his compositions—he reads them, mails them, and waits for Robert’s reply.

CO: It may be the third Maximus, but I’ll read that group shortly. And it has no title. I’ll begin it.

I tell ya, it’s cruel. There was the rattler, pitch pulled over Cassius Shoals at midnight, some thirteen years ago in a gale of wind, then came right side up and got into port safe with every man on board…

This untitled poem is the beginning of what would turn into one poem in a set of many, what Olson here calls the ‘Maximus poems.’ I opened a book of his printed Maximus poems to follow along as Olson read aloud:

CO: Here then is a set, starting with letter 24.

These poems were all written in the form of letters to Gloucester, the town on the north shore of Boston where he used to live as a child during summers. Following in his father’s footsteps, Olson was even a letter carrier briefly, in Gloucester, and got to know its geography and inhabitants.

While I was reading along, a curious thing happened. When I pressed stop on the tape—

the Maximus poem on the page became jumbled in my mind. The words lost their rhythm without Olson’s guiding voice, and I could not make much sense out of the odd spacing and sentence composition on my own. Then I pressed play again, listened to Olson reading the poem—

Thomas Gardner the “planting  ( meaning,
the establishment, however much a bean row,
and some Indian corn; much more salt,
was the business.) The two of them
“bosses”,  for a year.

and it all made more sense.

Olson didn’t just compose tape letters, though. He wrote buckets of paper letters too, which to me, were as incomprehensible as his poems. One letter I found in Houghton’s archives in Cambridge, Massachusetts, Olson began writing with pencil and paper while riding in the back of a taxi. When arrived home, he shoved the paper into a typewriter to finish composing that way. Olson’s letters are a maze of indentations and sporadic punctuation. Sometimes I even had to rotate the paper upside down to read what he had written.

This all got me thinking: if Olson read poems on his tape letters—are the letters he wrote also poems? Because the thing about the series of ‘Maximus’ poems is that they were all addressed, as letters, to the very real city of Gloucester, Massachusetts.

There was only one thing to do to get to the bottom of my questions. I had to visit the addressee in these Maximus poems. 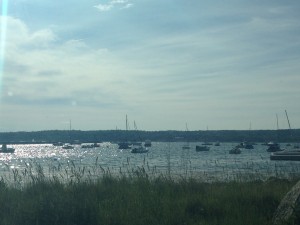 A picture of Gloucester’s shoreline, taken when I visited the town with Gerrit Lansing.

I had to go to Gloucester.

Gerrit Lansing: Harry Martin and I arranged for his first reading in Gloucester.

This is Gerrit Lansing, a Gloucester resident and poet. He was good friends with Charles Olson from the 60s onwards, when the two lived in Gloucester. Gerrit picked me up at the train station and drove me around Gloucester, pointing out the bars that have been there for de cades and the main street that appears in some of Olson’s poems. Gerrit was incredibly generous, walking around the town with me, his arms swinging like a kid, despite his age.

GL: He wasn’t particularly known in Gloucester except as a large, hulking man. He wasn’t known as a famous poet.

Gerrit and I sat in his living room in Gloucester. The birds were chirping outside, a lawnmower going, and though I knew that the rumbling interruptions were cars zipping by on the road, I kept tricking myself into thinking these were waves. We were so close to the ocean here. You could see a little bit of it through the window across the room.

Geritt told me about first meeting Olson and the development of their friendship.

GL: He had no telephone. I knew that Olson lived in Gloucester. So we tried to find out where—what street he lived on and drove there around four in the afternoon. He was just getting. He was totally welcoming and we were there for hours. And Harry and I particularly were enchanted by him. He was, as you know a huge, very big man, nearly seven feet tall, and very, very genial. But, one thing about Charles—he listened also. He was not a monologist.

It was a challenge to hold all these thoughts about Olson at once: here is a man who wrote letters, which are by nature monologues. And yet, Geritt told me that Olson listened, too.

GL: Olson started being involved with the idea of poems and letters being coterminous. He had some distrust for the idea of poetry as such. He was a historian and these were letters—the ‘Maximus’ poems to Gloucester. If you read those letters—Maximus to Gloucester—that were all published in the Gloucester Daily Times. They printed these letters in Olson’s own format. And they concern specific things going on, like tearing down an old building and things in Gloucester, and he addresses people that he knew in Gloucester.

I wonder now, was Olson expecting a response to his poem letters?

I imagine Olson waiting for the mailman, out there in Gloucester, perhaps walking long strides over its cobbled streets, eyes peeled for answers.

It was listening to his tape cassette letter that brought into focus these details of his artistic life: his extensive letter writing, publishing poems as letters in the Gloucester Daily Times, and the Maximus poems they would one day become. Olson’s tape letters to Robert Creeley felt like fishing lines cast out into the sea; he was waiting for a tug, a response. These tape letters were very much directed at one person but the actual poems Olson read aloud beg the response of many. It is a personal letter intercepted, a voice begging for its echo.

Maybe Melanie and I were trying to do something similar with our audio letters. Meant for only each other’s ears, but like many works of art, I think we were looking to make something of our voices and stories by sounding them into a recorder and casting them out.

MW: There was kind of like a ritual of form to it. The title, and the way we would start and end, and looking for sound, and also I think it became a little like a ritual, I think. Like, seeing your name in my inbox and the recording attached to it and I would know, okay, I have to wait until I get back to the hotel and I can download this and listen to this with my headphones in and listening to somebody’s voice like that is so…

CO: Now to take it back, I would like to read you, Robert, what you know of but I don’t think you’ve seen.

Thanks for listening to Reel Writing. The song you heard on this episode is called “We Could Stay” by Nicole Reynolds. This has been the fourth episode of Reel