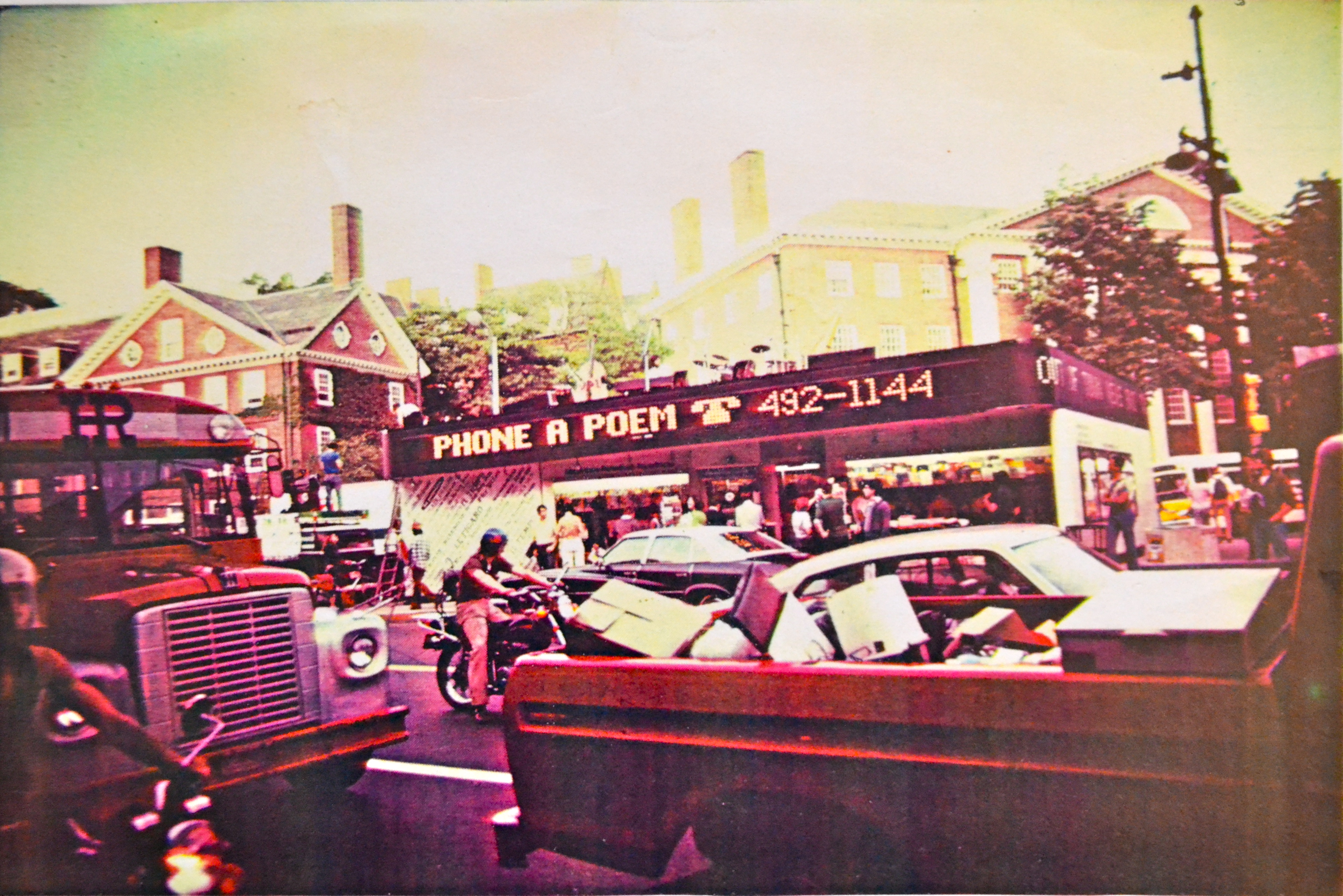 This is Rosellen Brown. I want to read the poem that I think is most appropriate for Phone-a-Poem. But you must remember, dear caller, this poem was not written about you.

Peter Payack: You could call from the intimate confines of your house. You didn’t have to make a public statement, I’m going to a poetry reading. And it worked. I was surprised. You know, I was expecting like maybe ten, fifteen calls a day. And the phone just never stopped ringing.

Virginia Marshall: You’re listening to the second episode of “Reel Writing: Poems and prose off and on the reel,” brought to you by Houghton Library at Harvard University. This week, it’s Phone-a-Poem.

In 1976, Peter Payack, the owner of the voice you just heard, had an idea. He wanted to make poetry easily available to the public. He started a call-in service in Cambridge, Massachusetts—Phone-a-Poem. By 1990, the records in Houghton Library’s archives showed that Phone-a-Poem was getting anywhere from 20 to 140 calls per day. It was simple. All you had to do was feed 10 cents into a pay phone and dial the Phone-a-Poem number. Then a message machine would pick up on the other end, and you might hear this:

Peter Payack: At that time, it’s like a little answering machine that you buy at like Radio Shack or something. And then you know when we had a popular poet on, it’d be like, it’d burn out the tape and I’d be scrambling to get more tapes and everything. The machine would just click, and you’d hear click all night long. And that means that all during that three minutes of the poem, people were calling, because it would happen that fast. I mean, I can’t believe that. I just remember the first couple of weeks we’d say listen to this going on. And it’d be like 2 o’clock in the morning and it’d be like, wow, this is really working.

Roland Pease: It was fun. It was a communication with poets, and then their words would continue communication on the phone with listeners.

Virginia Marshall: Roland Pease, editor of Phone-a-Poem after Peter, spoke with me on the phone, which seemed fitting. He described the workings of Phone-a-Poem. Every week, Peter and Roland would change the message so that you might encounter an up-and-coming poet, a former poet laureate, nursery rhymes, or poems read by children. Some poets were big names—Robert Pinsky, Rita Mae Brown, Langston Hughes, and even in 1979, a poem by Pope John Paul II.

Roland Pease: I would ask them. You know, I would send them a postcard that had boxes. You know, I would like to do phone-a-poem or I would not like to do phone-a-poem, and most everybody—from May Sarton to John Updike to Donald Hall—said “Yes.” Well, I think poets—even famous ones—liked to be asked. They like to be noticed, they like to be appreciated. Every writer wants an audience, and this was sort of a ready-made audience. And I think that appealed to them. 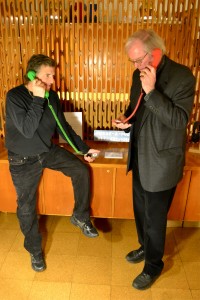 Peter Payack and Roland Pease listen to audio files from the Phone-a-Poem archive in the Woodberry Poetry Room.

Virginia Marshall: Now an editor of Zoland Poetry and a long-time writer Roland told me that when he joined on to Phone-a-Poem, the concept just made sense. The answering machine was new technology at the time, and it was a quick and easy way to make the written word available to all. It certainly got poetry out of magazines. Now the words of poets existed in telephone wires strung above citizens’ heads.

But the poem messages were not just a convenience—the three-minute cassette tape presented a new poetic format. The boundaries of the reel were like the rhyme scheme of a sonnet or the rhythmic casings of Ginsberg’s haikus. We may have text-lingo now, with abbreviations popping into poetry as a result of necessary word reduction. But in the late 70s until its conclusion in the late 90s, the poetic world saw the rise and fall of the answering machine poem. We can see in its history the emergence and disappearance of Phone-a-Poem.

What defines this era? Perhaps it is the ubiquity of the poems, right there at the end of a phone number. And yet, each poem is effervescent. It is so precious, to lose a dime and gain a snippet of art. The poem is only there briefly, in your ear, and then gone, with the click of the answering machine.

You riffle years of pages,

the closed accounts of friendships,
for one hint of a joker,
and your neck crawls with the cold.
Something like your own guilt then

starts in the motiveless dark.
The click cuts you away, free.
Three o’clock in the dark night
of someone’s soul, who had to hear,
shaken, your voice before he slept?

That was the last stanza of Rosellen Brown’s poem “Who It Is Who Could Not Wait.” In theory, if you liked the poem so much, you could call back to listen once more. If you didn’t like it, well, you didn’t have to listen. As Peter pointed out:

Peter Payack: I always thought it was an opportunity for people to hang up on a poem, not just to listen to a poem. You’d call in—I don’t like it—you’d hang up.

Virginia Marshall: To end with, here is a poem I would not have hung up on. It’s Donald Hall reading “The Ox-Cart Man.”

Is this, uh, recording now?

What I like about this recording is the background noise. It makes the poem very intimate, as if we are in Hall’s living room with him as he presses play on the tape cassette. Listen to this second half of his poem. You can hear a car passing at one point, and throughout, if you listen very closely, a soft clock ticking.

and at home by fire’s light in November cold
stitches new harness
for next year’s ox in the barn,
and carves the yoke, and saws planks
building the cart again.

Virginia Marshall: This is a song by Big Mama Thornton called “Private Number.” Earlier on this episode you heard a cover of Carly Rae Jepsen’s “Call Me Maybe” by Scott Bradlee’s Postmodern Jukebox.