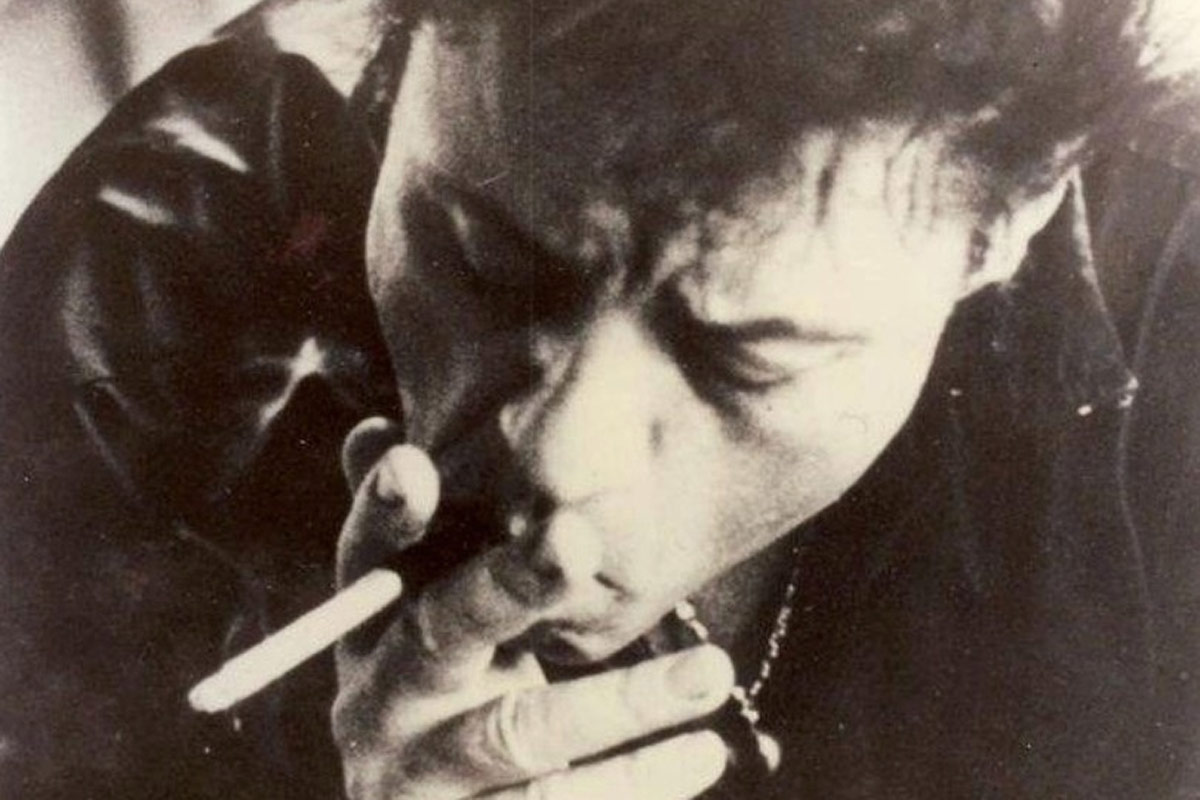 First published by Ferry Press in 1968, long out of print, Stephen Jonas’ Exercises for Ear was rescued in 1994 when Talisman House republished the complete book in Stephen Jonas, Selected Poems. Over the years I’ve wanted to extend the discussion of Exercises for Ear that I began in my introduction to that Selected, to look more closely at particulars, not-so particulars, local, not-so local, and to jump into the mix anywhere I choose—amidst characters and dramas of a tawdry, highbrow late 50s through mid-60s milieu—to listen to songs of Boston gone.

To begin, these are not poems in a traditional sense. Gerrit Lansing has called them etudes. They are bits and pieces—some complete units, others trail off—snippets of conversations, tongue-in-cheek shouts, persona poems, rants, quick snapshots of Boston above and below ground. If anything, they are a marvelous whole, yet individually they’re more like riffs a sax player is rehearsing on the Esplanade with his case open for coins. No two alike. Melodies of hustlers, junkies, lovers, hipsters and not so hip—sneaky peeks, steamy manhole covers.

Self taught, Jonas’ encyclopedic interests informed his writing. In terms of poetry, William Carlos Williams is central, especially in the Exercises for Ear. From Williams he learned that the local is universal. He learned the value of using American speech idioms. He learned that anything and anyone could be subject of a poem. Olson’s sense of Projective Verse inspired Jonas too. From Olson he gleaned the significance of the poet’s breath as means of composing and mapping out the poem. That sense of breath must have impressed Jonas, particularly in relation to his passion for jazz—the breath his idols Coleman Hawkins and Lester Young had to transfer through their horns. 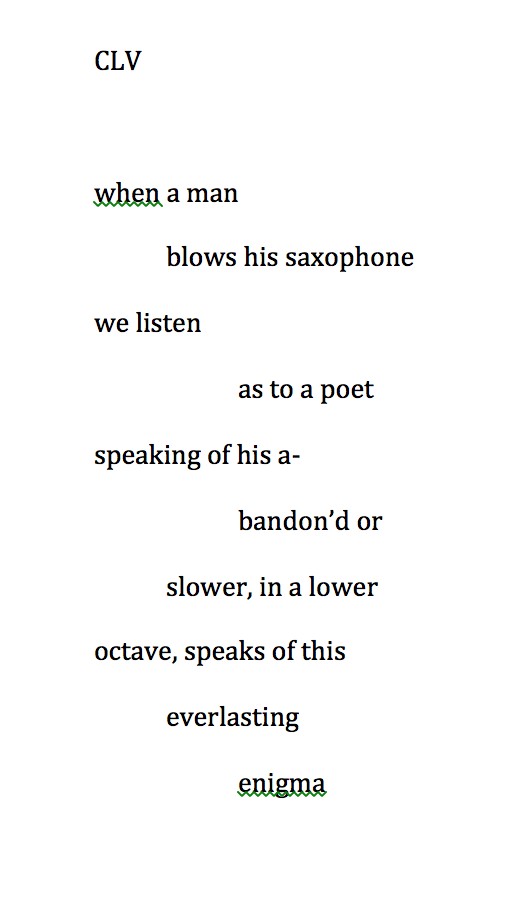 It’s like he’s giving a workshop, all sound and sense. Referring to the Exercises in a letter to his friend Raffael De Gruttola, he wrote: “…they’re swinging & let’s hope once & for all the ‘jazz poetry hassle’ be resolved. The methodology that hugs the scene like Zukofsky’s vowels to necks of consonants”.

Jazz is central to Jonas’ aesthetic. Spontaneity and improvisation mean each Exercise can and should go anywhere. It’s not that he wrote and settled for first draft. Jonas worked and revised them in order to affect that sense of spontaneity. It’s less about hitting the perfect note than getting at essential sounds and emotions. Jonas began working with older poems and new material some time around the mid-sixties. Mostly short, to the quick, lively riffs, his intention was nothing short of synthesizing urban idioms, poetry and jazz. 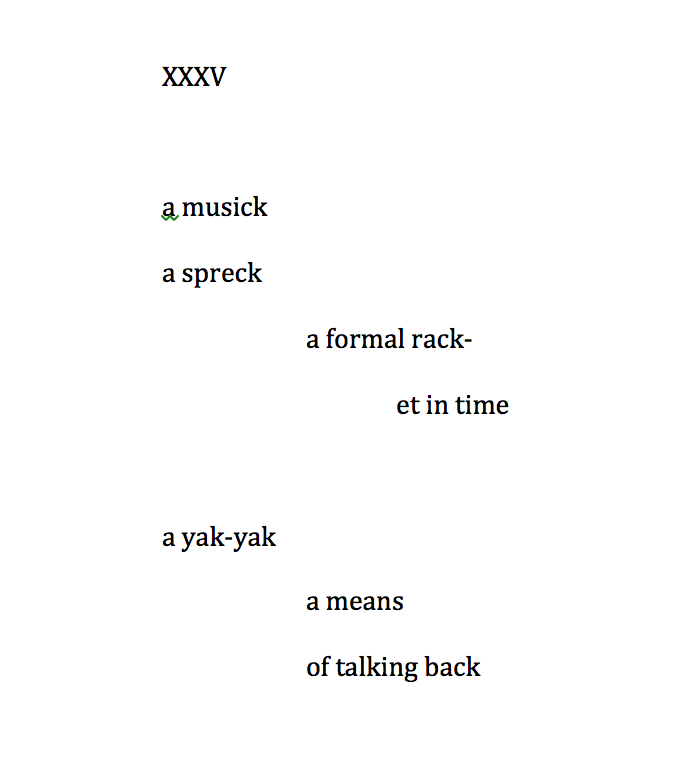 A means of talking back indeed. In some ways Jonas saw the job of the poet as rebel—that unwanted element in society that had the audacity to talk back.

I think for Jonas it might have been a badge—to be scorned, outside “laws”—outside society where at times he might have already felt, being of mixed race and homosexual, both taboo during his time. So the message was take pleasure in being derided. Here also is a classical nod, the allusion to Plato, and the egyptians (small e)—the Exercises stretch from the streets to the classics.

In this Exercise IV, I hear yours and ours in the repetition of yr’s and ar’s. The r’s pick up on this and roll the poem along. The vowel section swings. Consonants snap and do marvelous things like the “n” of “can” (ending stanza) carried over (that momentary silence) and picked up first word in new stanza “n” of “never” which automatically doubles times it forward with ever so that even in this poem of direct statement, the phrasing is all rhythms and rhymes. Jonas’ enjambment (especially w/articles and prepositions) helps with pacing, tension, space, and hang time. Creeley said something like he learned his enjambment from listening to Charlie Parker. I believe him. Jonas learned from Creeley. He’d first heard him on Cid Corman’s radio show and read him in Corman’s seminal magazine Origin. Jonas’ friend Jack Spicer wrote that things correspond.

My new reconsiderations of Exercises for Ear happen to coincide with the Poetry Room’s recent digitization of a 1969 Jonas reading. It is now the only (of two) recorded Jonas readings available. The recording is brilliant—clean, as if Jonas is in the room with you. It contains a selection of Exercises for Ear, along with other poems from his big work Orgasms, and what I think is his great long poem, “Love, the Poem, the Sea & Other Pieces Examined By Me”. I’m instantly struck by Jonas’ elegant, refined tone. The barrage of vowels and consonants so prevalent on the page is almost understated. The voice is confident, he navigates his lines, line breaks, starts and stops seamlessly. This reading catches Jonas at the height of his powers. Though recorded the year before he died, the level of his delivery is stellar. By this point in his life, Stephen Jonas knew that he’d accomplished what he set out to do:

I look forward to continuing these explorations of Jonas in future installments. Stay tuned.

Curator’s Note: The Poetry Room’s July 10, 1969 recording of Stephen Jonas was likely made at the Fassett Recording Studio in Boston, where the Poetry Room also made its early recordings of John Wieners and Robert Creeley. Photograph courtesy of Paul Petricone.