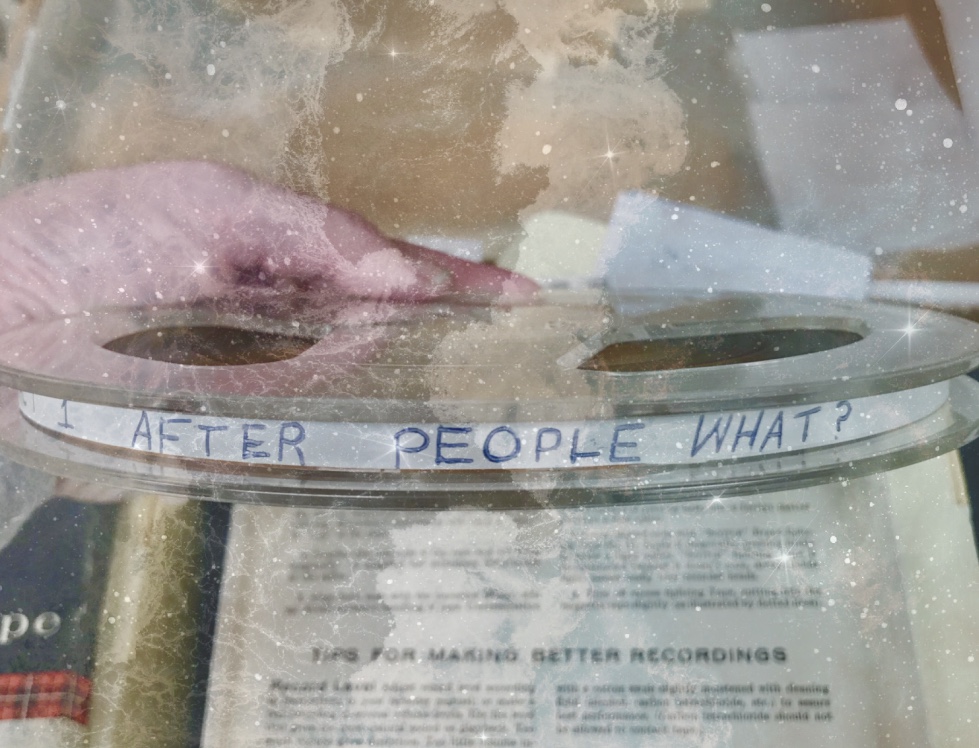 The materials I work with are stored underground in a climate-controlled environment—a sort of seed-vault of voices.

Last winter, we brought a series of reels up from the sub-basement, the container of one of them so faded, we couldn’t make out an author’s name. But a question was inked onto the tape itself, seeming almost to orbit it:

We couldn’t tell if it were a title, or an epigraph—from “epi” meaning on, above, beyond, between. It might even have formed a sort of epitaph, the ink blurred and boundless as Daguerre’s first-photographed beings.

From what we could tell, the tape was made in the early 1960s, when the technology was still young.

Reels themselves emerged from the War—in order to (among other things) mask the vital stats of the speaker. Without the surface-sounds of a stylus against a rotating disc, listeners were left in doubt as to whether the broadcast was pre-recorded, whether the speaker (or leader or oppressor) were living or dead.

We couldn’t play “After People” that day, because we needed to digitize it first. Though the human voice was declared “immortal” with the invention of the phonograph, it has turned out to be (what Clarice Lispector has called) “a small ever,” a brief eternity…..

Recordings decay much more swiftly than paper, as if voices wanted to return to the air, to the reservoir of the last thing they were.

In the world of audio preservation, there is (as a poet once said) no final answer to “what time is it?” It is always already time: the clock is ticking on all the recordings on Earth.

It occurs to me the recording may be blank, or of a breathing or stream—silence also has its vocabularies.

The only thing I know for sure is one of the contents we’ll find on the reel is Time. To record anything is to construct a duration. And, in many ways this tape’s explicit question is the implicit one that underlies all recordings.

To record is, in essence, an asking after….

And, “after” is, after all, a curious preposition, one that can suggest both Time and Space. In this case, the phrase might mean: “Next to (or besides) people, what can exist?” or “After humans are gone, what will flourish?” or, perhaps more selfishly, “What will become of me, you, us, this?”

Existence is isn’t in the narrower sense.

On the first night of my father’s diagnosis (dia-gnosis, meaning “to know / apart”), at the outset of that new time, or what felt like a timing where once was Time, he set about to relearn an old alphabet, the Morse code his dad taught him after the War.

He could still point to his father’s last message. “What did it say?” I asked. “Nothing,” he said, except that it was sent, the very fact of its coming forth….

What he liked about ham radio was that it was less about the content, than the extent and clarity of the call: the contraption tested reception itself (how far out me am I? How deep does my being reach?), mankind’s capacity to be communicable at all.

On the fourth anniversary of his death, we received a calling-card confirming that his message had just been received by a man in the Midwest, where (it so happens) my dad was born.

Who were we to question the veracity of the signal, the “event vibrato” of his existence, the tapping of the transmitter like the “rubbed two sticks of all relation….”?

In the same decade as my birth, two golden records were launched from Earth aboard The Voyager.

They are etched with the sounds of laughters and footsteps, of whales and of surf, of Beethoven and Blind Willie, of twentieth-century thunder, twentieth-century birds. The discs also contain the brainwaves of a woman thinking of love, and the voices of children from 55 countries saying “hello” all at once.


(No wars are on the manifest,
no sounds of rifles were sent,
no cries, or coughs, or sirens,

“omissions are not accidents”).

The discs have not landed any more than you could say the wind has landed, and are headed “to no particular star.” Like a poem, which is said to be always underway—they are not done uttering yet….

The truth is, I’m not sure where this little “post” is going, or why the After-reel has become such an object of wonderment to me. Or, if to play its fossil-of-call would alter the ratio of questions to answers on Earth.

I suppose I am drawn to questions that are as true (you might say) as any answer, as open, as sent….

I find the question itself so borne and resonant—seeming almost to have shed the burden of personality (or authorship), shed gravity (our birthstone), shed the very prospect of reception, “out past the eyes,” out past the hands and face—the question being a question about the Universe after (or beyond) the ones-who-question, beyond human experience,

I am grateful to Amiri Baraka, Paul Celan, Kenneth Irby, Clarice Lispector, Fred Moten, Marianne Moore, Rosmarie Waldrop, and Marguerite Yourcenar, whose words and thinking informed the quotations and concepts in this post. Since beginning this piece, I have been able to glean a little more about the recording and I look forward to being able to digitize (and share) it “after” we return to campus post-pandemic.