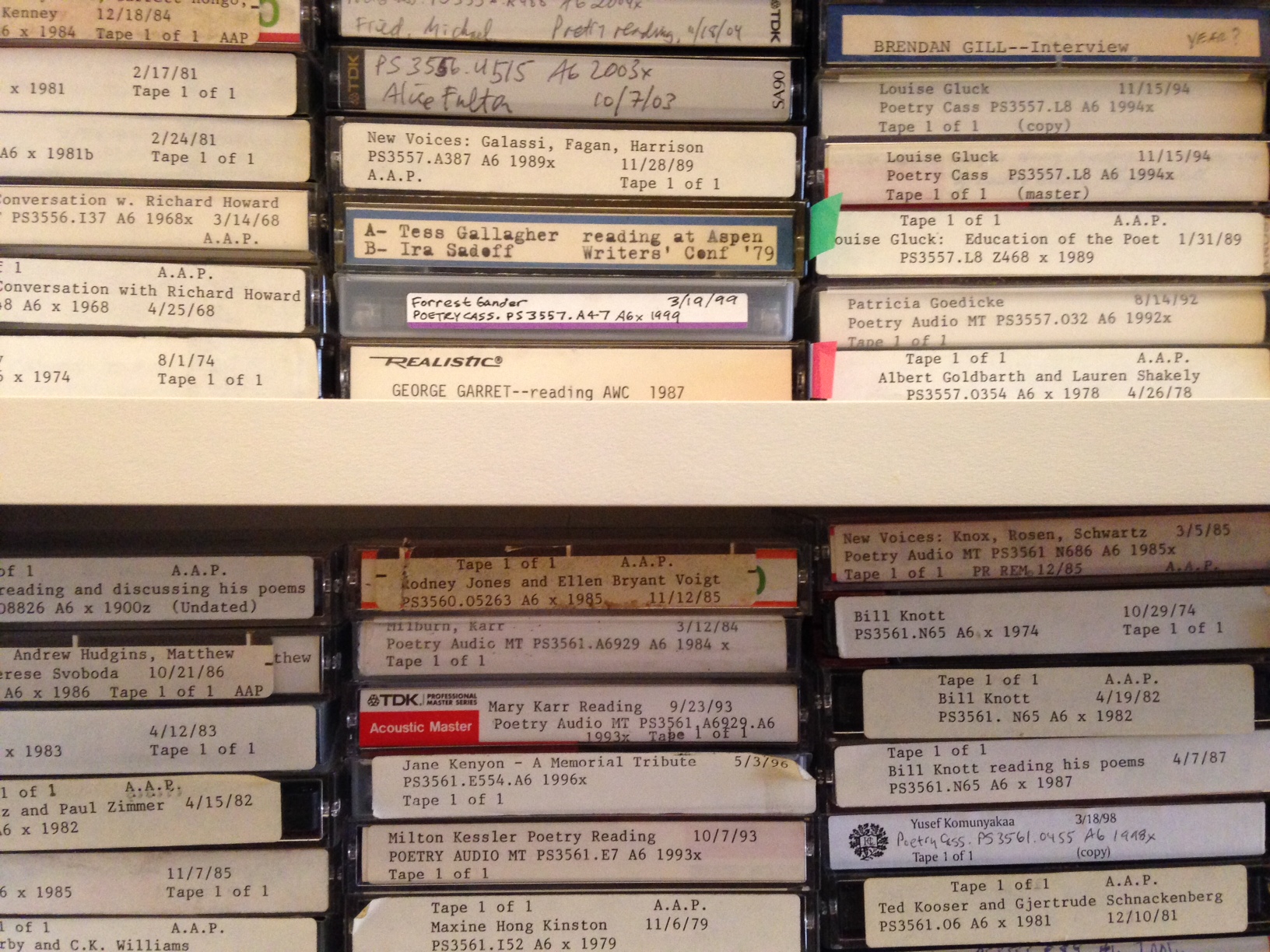 The cassette tape celebrated its 50th anniversary in 2013, just two years ago—a fact that causes us here at the Poetry Room an admixture of wistfulness and alarm.

On the one hand, I’ve a vivid memory of lying in bed, fingers poised to press “record” the moment the radio station played my latest favorite song. How easy it was, then, to pick the next thing I’d put on my mix tape, since it wasn’t so much a matter of choosing the best things in the best order as it was of recording what I could record, when I could record it.

The cassette facilitated such spur-of-the-moment documents, such serendipitous juxtapositions. It was so easy to use that (unlike its predecessor and next of kin, reel-to-reel) it incidentally captured all kinds of intimacies. Consider this clip from a recording made by Seamus Heaney in Dublin in 1986 of his “Villanelle for an Anniversary,” a few months prior to the poem’s live premiere at Harvard’s 350th anniversary celebration that September: 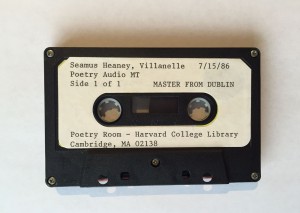 Though our HOLLIS record indicates this was a “studio recording” (and the cassette itself is labeled “Master from Dublin”) clearly what we have here was not made in any studio: the telltale sound of the “record” button’s release at the poem’s completion might be evidence enough, but then there’s the sudden inflow of what you may recognize as Robert Frost’s voice, reading his own poem, “Birches.” The remainder of the cassette (which was digitized last year as part of our cassette digitization initiative) contains more Frost recordings, followed by Hugh MacDiarmid reading his own poems on Side B.

But what was Heaney doing with a bootleg of Frost and MacDiarmid (after all, one could not record over commercially produced cassettes)? Did he ask the Poetry Room for those recordings, was he teaching their work, or listening to them while writing the villanelle? Whatever the answer, it’s this kind of incidental information (more likely found on cassettes than any other format) that provides potential insight into the late poet’s interests if not his influences. And so we celebrate our cassette tapes and the intimacies they contain.

We also worry about them: in spite of this CNN article’s optimism when it comes to the cassette’s resurgence, magnetic tape is a volatile format, prone to maladies both familiar (those of us old enough remember what happened when a tape snarled) and strange. Sticky shed syndrome, a condition requiring that tapes be “baked” prior to playback, mostly afflicts recordings on reel, but the list of other ailments inherent to the format is not short. When I’m not at work, I tell my music-collecting friends to buy vinyl, a format that, when stored properly, can last up to 100 years. Cassettes and CDs live much shorter lives (estimated expectancy 25 years), while it’s far too early to predict the life of born-digital audio.

Here at the Poetry Room, we have hundreds upon hundreds of cassettes. Some are of the heirloom variety: they are copies made from the original format (often reel-to-reel, but just as frequently, phonodisc) for listening use in the Room, or because (as with many a new audio format) it was assumed the new technology would be superior and last twice as long. Many others are still more rare: they were recorded first onto cassette tape, and never duplicated. It’s this last category that worries me the most because: 1) as troublesome as duplications of recordings can be for us in terms of understanding provenance, at least we have the assurance that multiple formats increase the likelihood of a recording’s survival, and 2) the casualness and ease with which one could press “record” is often accompanied by lapses (lopped off introductions, omissions between Sides A and B when the tape was flipped) and a lack of essential metadata. Of the 100 cassettes we digitized last year, probably half contain these kinds of idiosyncrasies.

Such is the case with this uncataloged 1985 recording of Amiri Baraka reading at the Naropa Summer Series in 1985, excerpted here: 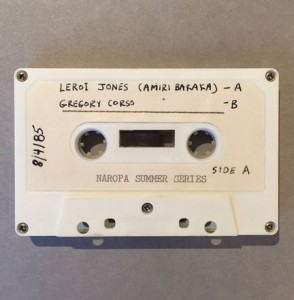 Courtesy of the Woodberry Poetry Room

This recording came to us as the gift of Kurt Brown, along with dozens of others that Brown recorded in conjunction with the Aspen Writers’ Conference and at other Colorado venues. For many of these at-risk recordings, the Poetry Room is the sole repository.

Curator’s Note: This recent cassette digitization initiative was made possible by a 2014 HCL Collections Development grant. In some cases the recordings were transferred from reel-to-reel instead of, or in addition to, cassette.