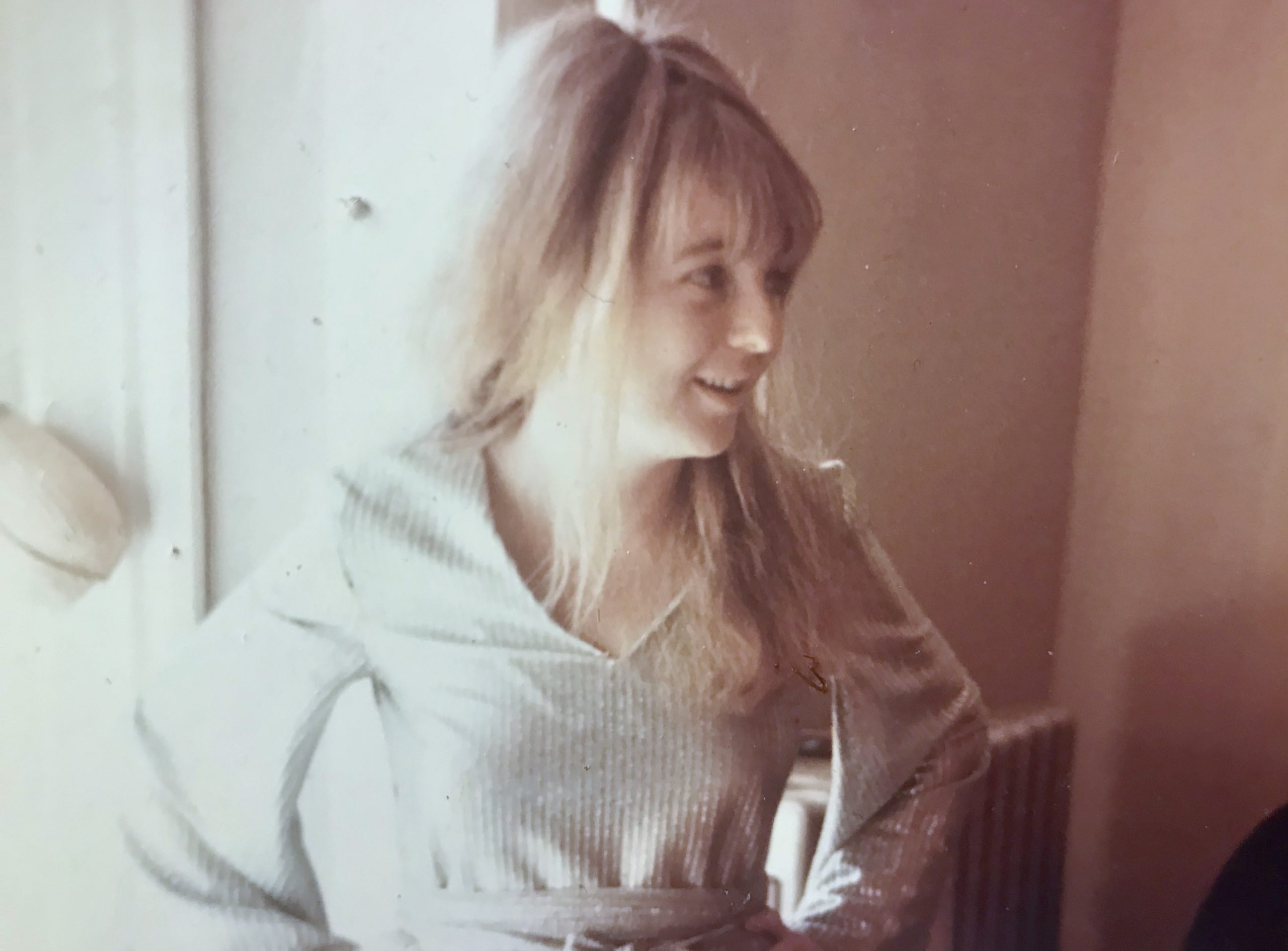 It’s as though the word were not simply a rote noun (“birthday”) but an urgent verb, a continuous commandment. “I seem to be a Verb,” as fellow New Englander Buckminster Fuller famously observed.

And, in truth, it’s hard to imagine anyone more born than Fanny Howe, more wholly emerged, more naked, or a poet whose multi-dimensional knowledge and hard-earned experience have been so cloaked in humility and accompanied by such impish good humor, searing insight, and unfailing generosity. Over the course of the last eight decades Fanny has only continued to grow, to be born, to “accumulate the human….”

As her 80th birthday approached, and the pandemic didn’t relent, I decided to reach out to a few friends from different parts of her life to see if they might contribute some words and photos by way of a little Festschrift.

But please don’t let this limit the festivities: I encourage you to share your own fanfare for Fanny, as a part of the Comments at the base of this blog.

I wish I could write a poem for Fanny, but for that I would need to be Yeats. It would include an elf child and a tavern with wine and jokes flowing. Or maybe I would need to be Dylan, growling about a woman who never stumbles because she has no place to fall.

But I’m not one of those guys. I will say, I feel lucky to have met Fanny and to be her friend. She is one of a kind. She has quicksilver intuition.  She is wise and a wisecracker. A firecracker too. She’s taken big risks for what she believes in. She’s allergic to pomposity. I think she must have an inner compass that leads her to what’s genuine, wherever it may be. I hope I always know Fanny. She is necessary.

and disobedient children–
the ones who skulk off

to play tag
just out of sight

For Fanny who’s
in love with God

whom she met once.
She won’t say where.

She keeps his secret,
doesn’t speak his name.

Sometimes I wish I could say
what I don’t know how to.
More, I wish I could not think
some of the things I do.
I’m almost there, I imagine,
but fifty years later I realize
it’s not even close. Close
as can be? Maybe that’s
what grace is, isn’t it?

for Fanny Howe at 80

Fanny Howe has mastered so many forms to accomidate the unruly reality of life, animating them wth her wild imagination, her asymmetries, and her skipping cadence like a heartbeat prepared for battle. She writes a lyric of reality that enacts a vital intervention with faith, motherhood, gender, race, and politics. We can take solace in the way her poems move from doubt to devotion, from salient political critique to the miraculous. Hers is an embodied wisdom that is both brilliantly articulate and precariously lived.

There is a dignity throughout her work, a dignity that emerges from her affinity for the wild and ungoverned. She finds grace in naming the crisis of those outside the frame of power. Naming that crisis has been her life project and reading her in this light allows us to understand her radical Catholicism, her belief in the radical emancipation of human endeavor, consciousness.

The kindness that she showed me when I was young I can never forget, it is something that I cherish. I met Fanny over 30 years ago, just a month clear of addiction, trying to move beyond the life of a heroin addict on the streets of the Lower East Side. I was tender in body, mind, and soul, to say the least. She quickly took me under her wing and showed me great decency and without any judgement whatsoever. She turned me onto so many essential artists that helped me move forward and spoke deeply to me—and still do: Andre Tarkovsky, Simone Weil, and John Wieners, to name a few. We spent time together, and took walks, and sent each other poems. Over the course of about a week, day by day, she sent me a series. The opening phrases of it provided me comfort then when I was first recovering and saw me through dark times over the course of my life. I carry these words in my head like a kind of mantra or talisman: “In the spirit there are no accidents. God is already ahead and waiting: the future is full.”

To find a faith doesn’t just help, it’s everything. The choice is real, and I choose to read Fanny Howe because her work has always spoken and continues to speak deeply to the core of our being here, of my being here when I’m lost in her song.

How is an adverb. How is a question – not of why where when what who: but sometimes, like Cindy Loo Who, Fanny Howe drives her poetic car right into the center of a holy mystery.

For she is wholly mystery, both utterly mundane and absolutely mystical in her simultaneities. How now, Fanny Howe.

Fanny Howe for the Perplexed

How Fanny has long been a student of terror, and of terrorism, of childhood, of the child persisting within us, the second childhood folded within the first, the childhoods and adolescences of the Tsarnaev brothers, the Boston Marathon bombers whose youth is so astonishingly considered, alongside St. Francis’, in her The Needle’s Eye: Passing through Youth (2016).

Fanny on a hill, fanny on a dell; Fanny eyeing Bunker Hill, Fanny sings the Farmer in the Dell.

How Fanny is the dweller in the hollows, the preserver of the vacancies, the honorer of the hole in everything, the womb the eye the shard the tear the empty O into which a breath might rush:

How Fanny is the attentive seeker, the sidelong looker, the prowler of alleys and playgrounds, the keeper of notebooks, the tender of children, a student of violence and sudden blooms of love.

HOWE: from Collins English Dictionary: a depression in the earth’s surface, such as a basin or valley.

How Fanny is one of our most truly contemporary poets and writers, and has been throughout her writing life. And here I invoke a philosopher she reads closely, Giorgio Agamben, who writes:

How Fanny has precisely this “singular relationship with her own time, adhering to it but also keeping a distance from it.” She is our singular contemporary because she refuses to be merely current. She attends to the alterities, the gaps, the dislocations, the darknesses, the opacities.

NOTE: This is an excerpt drawn from the middle of Maureen McLane’s talk “How Now, Fanny Howe?: a divagation with and through Fanny Howe” (delivered at Poets House in 2019). For the complete essay, click here.

The funniest thing I ever heard is that when San Diego was giving Fanny a retirement party and people were lifting their glasses to her and finally Fanny got up to make her own toast and informed everyone that her years in San Diego had made her completely miserable and she was glad to go. I’m sure these were not the exact words but Fanny is my hero in so many ways and I’ve wittingly and unwittingly followed in her footsteps from Boston to San Diego, to Ireland and back and because Fanny just knows so you can’t set her up. What does she know. I don’t know. But you can’t ever expect her to go to the mike and deliver what everyone expects. She’s a precise rebel. She tells the uncomfortable truth. There’s no way you can top that because she is really of another order.

And appreciating her work I would say it vanishes. It’s spectral fairy writing (but dirty) in that it sees what’s needed and does that and has no extra weight or self-consciousness in itself.

It’s language applied with maximum grace and soot and her form dive-bombs and rambles because it’s so gladly outside time and alive. Yet nature, wildness and greenness and rocks remain and she’s enabled you to see all of it. It’s a mystical lighting thing she does. I mean, how do you do that, Fanny?

My mystic is not old enough to be my mother.

She yells “No!” when she laughs at my jokes.

She can’t keep anything down and doesn’t drink, except for whiskey, wine, and water.

My mystic is her father’s daughter.

My mystic has her own monk, a hermit who had his own monk.

Out on a boat on the Atlantic with a friend, tossed around, my mystic screams with laughter when they don’t drown.

My mystic has an early edition of Proust in a closet with her sheets and towels. Any house sitter could steal it, but no one does.

My mystic picks at her croissant in the dark, Swann’s Way in her lap.

My mystic wants to know all about my men, so I tell her and she groans, and then we talk about the new Pope. She thinks he has a humble face.

From her apartment we can see an orange neon sign across the Cambridge green. At dusk it tints the dirty snow. My mystic used to run in and out of that hotel lobby with her best friend, stealing candy.

Now children crawl all over my mystic. In the pockets of her vest (the color of their red toboggan) they find hard candy.

My mystic is a sister. Is lilacs. Is toast.

My mystic has already bought her plot.

My mystic is both the crone and the infant in the fairy tale.

My mystic is a fairy. She flies everywhere but leaves no carbon footprint.

My mystic has a device. Children text my mystic from L. A., Dubai, Oxford, Paris.

My mystic might have been named Affliction or Delight if born at sea in 1620.

Or, two centuries later, out of Cobh and mad in steerage: perhaps Theresa.

My mystic has lips the color of a rose named for the Cathars, who had but one sacrament: consolation.

I treasure this picture of Fanny Howe and my daughter Emily who was born on October 12, just a few days before Fanny. They have a conspiratorial look on their faces, “go away, we’re having a good time!” When we walked through the door to Fanny’s apartment the day this picture was taken, she said to my husband, “you go sit down, I’m going to let the baby play in the fresh air.” It was March in Cambridge and the air was frigid, but Emily and Fanny didn’t know or care, and they chased each other in circles gently but intentionally for a full minute. I learned from Fanny that an artist should play as much as possible, but I also learned from her that there’s rarely a reason not to write a poem so get to it. She has a habit of deploying dire facts with ease and irony, “no one marries the right person,” “most people are liars,” and then eating a plate of french fries like she invented pleasure. The week Fanny was born is also the week Hannah Arendt was born, and the Catholic convert poet-philosopher-Carmelite Edith Stein. And it’s the week Fanny’s friend Bill Corbett, now gone from the earth, was born, too. All Libras, creatures of balance and justice, all people who loved our human condition enough to know what’s messed up about it. Fanny can balance big extremes as well as that fellow William Blake, like a waiter in a busy restaurant, like a mom with a lot of jobs. What an honor to be alive anywhere near her. Happy Birthday, Fanny!