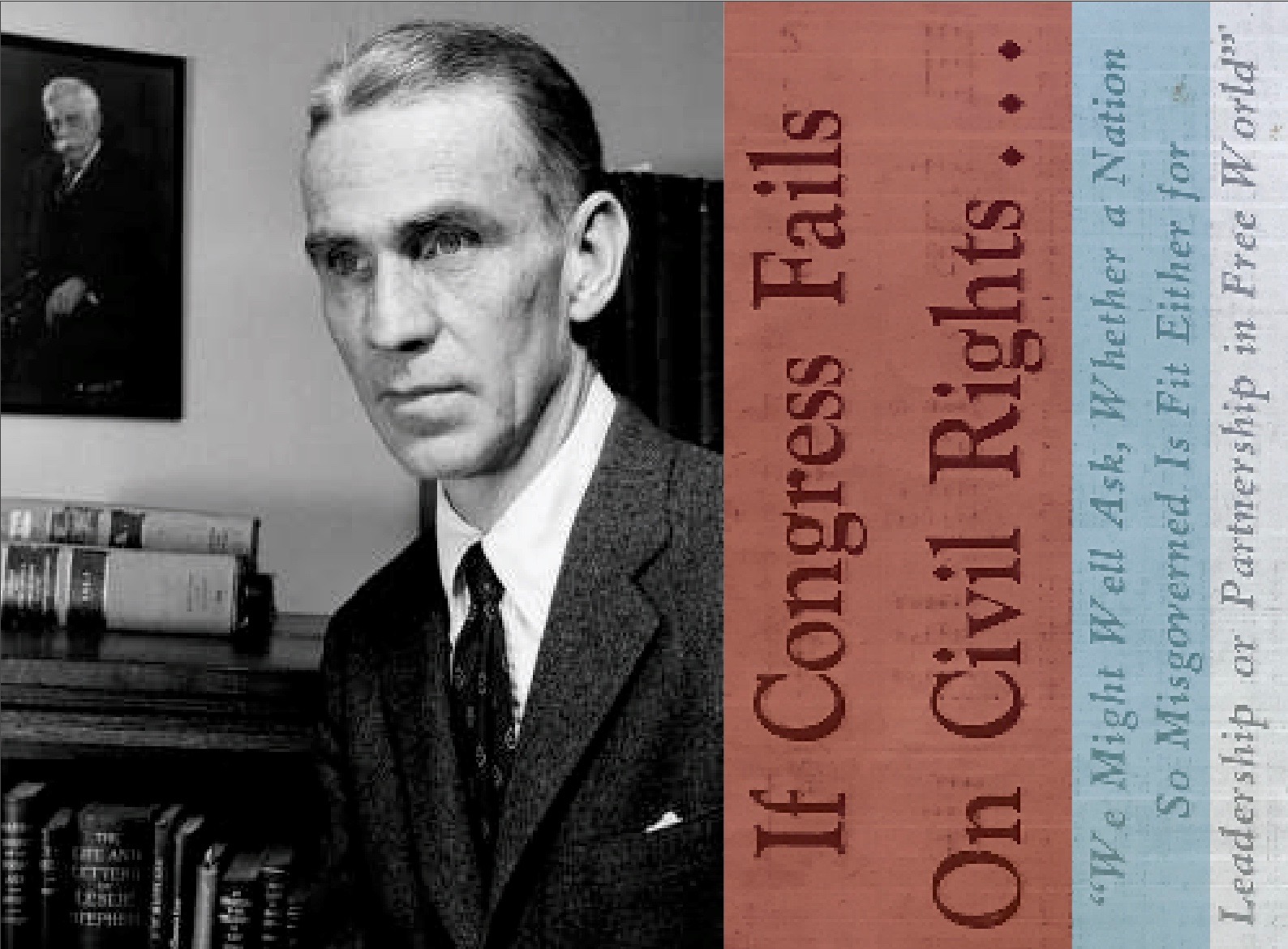 Mark DeWolfe Howe (1906-1967)—father of poets Fanny Howe and Susan Howe and the artist Helen Howe Braider—was a veteran of World War II, a renowned Harvard Law professor, a pioneering biographer of Chief Justice Oliver Wendell Holmes, an informal advisor to JFK (helping to coin the phrase, “The New Frontier”), a vigorous activist against HUAC, and a dedicated lawyer for the NAACP Legal Defense Fund. Steadfast in his efforts “to bring to fruition the rights granted by the 13th and 14th Amendments,” Howe helped his students establish the Harvard Civil Rights-Civil Liberties Review, founded the Lawyers’ Constitutional Defense Committee, and devoted his final year of life to the desegregation of the Boston school system. On the night he died, he had just returned from hours of political organizing in Roxbury, Massachusetts.

As a father, Howe encouraged his daughter Fanny to attend rallies with him at a very young age, urged her to go to Malcolm X’s 1964 speech at Harvard (which she still considers “one of the most searing events” of her life), asked her to join him for the 1965 Naked Lunch book-banning trial in Boston, and (unintentionally) introduced her to some of the repercussions of political dissent, when the FBI raided their home in response to his efforts to resist HUAC. Though he never had the opportunity to read her published poems, he was immensely supportive of her early writing career. He even asked his secretary to type up one of Fanny’s pulp novels, during the period in which she supported herself by writing paperback fiction.

In an oral history that I conducted with her about her father, Fanny describes his death, which occurred just a year before the assassination of Martin Luther King, Jr. (and two years after the murder of Malcolm X), as being “like the nails on a very specific coffin.”

More recently, Fanny has found “the last few years of the political atmosphere here to have been another death, an erasure of 50 years of the American struggle for equality and care for the Earth.”  She’s begun to ponder her father’s work again and to return to some of the central paradoxes he sought to confront: among them, the enduring division between our declared values and what one scholar has called our “encyclopedia of violations.”

What follows is a brief speculative text by Fanny Howe, which explores the still-evolving structure of a book-project that she has undertaken. In it, she engages with her father’s life and writings. The book, Manimal Woe, is forthcoming from Arrowsmith Press. Mark DeWolfe Howe’s papers are housed at the Harvard Law School Library. 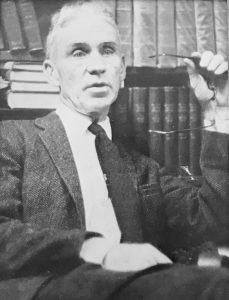 This interview began in February 2019 as a conversation with Christina Davis, a friend who runs the Woodberry Poetry Room.

However, I tore the pages apart in the heart of this terrible American moment and reconditioned it as a dialogue between me and myself. Christina’s presence is still latent in the questions I ask myself, and I would never have written this if she hadn’t urged me to say something about my father’s work.

Q: My Aunt Helen Howe once remarked, “If Justice Holmes was right (and in my way of thinking he was) when he said that one must participate in the passion of one’s time, I, unlike both my brothers, have done nothing.”

In fact, she went on the road and performed clever and incisive monologues about her own class. But nonetheless she felt inferior in her pursuits, as did most women of that generation. Now, in 2020, we are absolutely depending on the stored-up intelligence, watchfulness, and genius of women to “participate” in changing this country.

Q: Is this collection a form of participation for you?

It’s an attempt at airing certain ideas that floated around the house when I was young: ideas about history and law, before they are swept away entirely.

Sixty-three years after he died, I am trying (as a daughter) to trace the development of one man’s life as a scholar into an activist. And more—to see where the personal (spiritual) is always converting toward justice.

Q: Will the collection be personal or political?

Both, but not really either. Kind of Bostonian, I’m afraid. This is a city of reform, but not very radical these days. It’s a segregated city at every social level.

Q: You are not writing a feminist collection, then?

If feminism includes the anguish of all working people, refugees, prisoners, children, creatures, and climates, yes, but I haven’t seen such united purpose for ages. We had a sublime moment of it in Portland and around the country recently, young people rising up together. This gives hope.

Q: Why would your father be of any interest now?

Because the rift is so great in our country, and because there were divides then, too, and they are weirdly, sadly similar.  To look at someone ahead of me (or behind me now, as in gone) who took note of the problems, taught what he found, and became (in so doing) an activist. This is very helpful now.

He came from a sheltered background in Boston, and all seemed settled. But after his experiences as secretary to Oliver Wendell Holmes, that intense contact with the vast ego and brain of a Justice, and later his wartime service in North Africa and Sicily, the critiques he had been harboring of his own class, his family even, began to clarify. When he returned from the War, he was ordained Holmes’ biographer, and this lifelong task (or quest) galvanized and honed his positions on caste, American legal history, injustice, race, religion, and power.

Q: From people who knew him, I hear he was a very well-loved teacher and colleague at Harvard Law, and probably at home, too?

Yes, but he never stopped studying, writing, working, except for walks with the dog, and whoever wanted to come along.

It was during those walks, occasional drives, and visits to his study downstairs that I truly encountered some of his thinking, and he took me to rallies too. I was naïve and believed that amendments, laws, bills, and such would actually move us toward a new society.

But from the beginning, there has been a huge divide. At present, for me, Jefferson represents the divide, is the single figure who has a visible crack right down the middle that spawns something bitter. I am taking the theory of recapitulation as my guide in this process.

Recapitulation involves looking at a series of events and outcomes that have happened to others, or yourself, and seeing—the way you can’t at the beginning or end of it—where mistakes were made, or at least misunderstandings, and where your goals changed, where the path veered suddenly, stayed straight, where you were an influence or a victim, where you lived in the atmosphere of history. And what you kept safe, what was your treasure.

Q: How do you see such failures by going back over your father’s letters and talks?

Well, the way lies reproduce. Generations have their chances to pursue the truth, and often they submit to brute contradictory powers.

Q: Can you tell me about the night the book takes off from?

You mean this….? The night he died, he had attended a meeting in Roxbury about school busing, although he was already feeling some pain in his chest. It was a cold February night, he had shoveled the snow, and when the call came to where I lived, I wasn’t surprised by the news. I had been dreaming that he was dying. I will say that this coincidence increased my belief in a hidden order.

The year was 1967, and the unofficial conclusion of the civil rights movement would soon arrive with bloodshed, assassination. The kind of “white liberal” he represented did not survive much longer either.

Shortly before his death, at a meeting of lawyers on civil rights, one of them wondered aloud why Blacks were so suspicious of whites. “Because we’re frauds,” my father said, “and they know it.”

He wrote frequently toward the end of his life of the chasm between what he called “our promises and our performances,” between law and morality. I used to think of Law as an end in itself, as though once attained, we could rest…. Like the Voting Rights Acts.

But my father questioned “the fate of these assurances,” and was skeptical of the idea that equality could be achieved through law alone:

“Is the civil rights movement only a part of a larger movement? How far are the American people willing to go in pressing this movement on toward radical change? A great many of the liberals, I take it, are very eager — genuinely, ardently — to find better solutions to our racial problems than we have yet been able to find. But I wonder whether that is going to be enough. Is there not, perhaps, need for a far more radical consideration of central issues in our society before we can solve this one? Of one thing I am sure, and that is that it cannot be done by law alone. The lawyer’s role in this area, important as it is, will perhaps be less important from now on. That victory is within reach. But the need for the American people seems to me to be for changes which are not capable of control by lawyers, but which need the help of minds and spirits very much broader and very much more radical in their inclination than the minds of lawyers are likely to be.”

He recognized that law is simply (or not so simply) what allows for the next phase in our collective development, our moral growth as a people, which is not itself an end but the momentum toward yet “more law” and then potentially yet more ethical evolution.

In 1965, he writes: “A great step forward has occurred—but there’s danger—very real danger, I fear—that progress will again prove largely illusory unless we come more intensely to recognize that beyond the law there must be a morality. And there may well have to be more law….”

All the morality now is coming from the people who have been humiliated. It is an uprising. And, a crossroads: This is why I have called my book Manimal Woe, in honor of those who struggle for a change beyond politics.