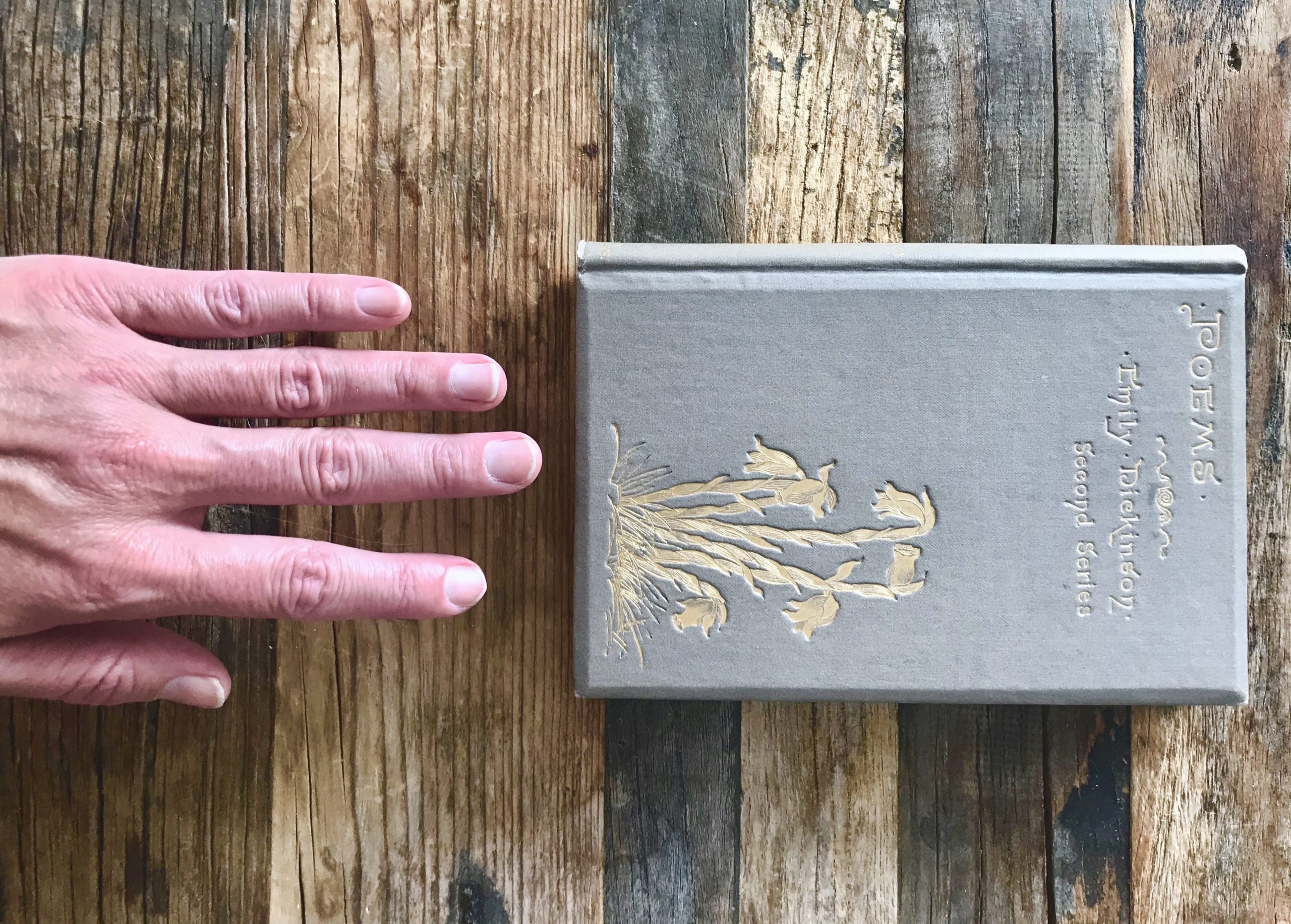 In these intangible, at times untenable days—the duration of which keeps extending its parenthesis—days in which we’re instructed not to touch, or greet within six feet, in which we’re made increasingly cognizant of what Amichai called “the circumference of the bomb,” or at the very least the consequential perimeter of our being, days of the necessarily distant and of griefs behind glass, days of the digital (though digital has its very root in “hands”), I’ve begun to reflect on what I, as a curator, have most longed to touch, materials I’m privileged to work among but must necessarily refrain from—a kind of “discipline of vicinity.”

It’s a strange favor the fingers do by being far, the noli me tangere of an archivist’s career.

But, somewhere in the molecules of Massachusetts what I haven’t handled persists because I—and others—have cared enough not to touch it.
﻿

Over the past few weeks, removed from the physical archives, I’ve had a chance to reflect on the fact that I have never in my entire time at Houghton Library touched a single word in Emily Dickinson’s hand—not “Hope” or “Nobody,” not “Frigate” or “Grass,” have never put a finger on that penmanship “so peculiar” Higginson wondered if she hadn’t learnt it from Amherst’s collection of “fossil bird-tracks.”

I did, I admit, once let filmmaker Jonas Mekas—that jubilant, generous “child until dying”—press the key of C on her family’s piano.

But, as for myself, I haven’t once opened the drawer in which, it’s said, Lavinia found the thousand-fold poems, or touched Emily’s diminutive desk, though I’ve led hundreds of poets on pilgrimages to it…..

When friends come to Boston, I often take them to Walden Pond to visit the site of Thoreau’s gone-hut. The cairn that grows there is no grave of Nature, or static relic, but a shifting earthwork made of the sum of our comings to it.

Houghton’s Dickinson Room is (by contrast) cordoned and the lighting (intentionally) dim—but there is a distinct exhalation (not unlike the arrival at Walden) each time I bring a poet or scholar in….

And since I can’t take you there today, I thought I’d spend the remainder of this little piece sharing—in lieu of a left stone on a Concord cairn—some poets’ reflections on nearing Dickinson’s desk.

“Shock of the modest desk when you first see it, saw her sloped shoulders, proportionate? felt the pace of attention, micro/macro-cosms, ‘practice’ as spiritual obeisance, pencil on paper on wood, microscopes are prudent came to mind, tight frame, taut line, quick pulse, canny wit, complicated mind-torques carry  much of great other poetry and imagination, all that lexiconic passionate reading.

& the necessary implements that aid and abet genius passion…. much happened/still in language in the force-field of this ‘object,’ not to mention copious letters, how can one not prostrate, bow down? not prostrate to the master Emily?

& her companion desk? frisson of object is palpable…. ‘archival’ vibration haunts the premises….

“Her desk, so small and precisely built, was like those I have seen just for letter-writing and quick notes.

So, it was a functional table, not for idle scrawl (which could be done on the bed nearby) but for something even more serious…. Perhaps prayer. A place to kneel and to fly on. She would have to hold it steady in case it flew skyward like Pegasus.

She would hate to know people stared at it and circled around in awe. And, the poor desk. If it had willpower, it would be gone in search of one who could make it disappear with a few magic words.

So, don’t even touch it with your fingertips or kiss the wood. Don’t sit in the chair and pretend to deserve the honor.

“I wanted to sit in the chair! And then, I was as certain I’d break it. It seemed the only possible reaction!

Someone said to me, ‘It’s like you couldn’t make a mess on a surface so small….’ And I thought: like Hell, you couldn’t. I’m sure she made a mess on that desk more than once.

There is, however, no getting around the fact that the desk is very small….

The smallness of the desk made me realize that there was nothing collective or communal about it—no way to get two chairs around it. (Thoreau’s desk is big enough to kind of crowd two chairs around it, as I remember, and Longfellow’s certainly). No witnesses!

It seemed like a satellite, or a Moon, as I imagined it in the room in Amherst.”
﻿

“Dickinson’s desk is petite yet looming larger than her/its dimensions. One of my graduate students at Iowa (Harvard alum Amanda Auerbach) and I have spoken about Dickinson’s shifting ‘positions’ in tone, and I can’t help but think about how that might be physically true at this small desk.

I had luckily plopped myself down in the research room at Houghton in front of the spot where a copy of Dickinson’s Herbarium was shelved. Her thorough, meticulous care, the book’s scope, would seem to overwhelm her desk. One could say this about her language, too, all she had to say, all the time in the world between her and it.

I couldn’t help but feel diminished in the room with her desk, and it reminded me of another desk that I felt pressed by the pages written there, Etheridge Knight’s. I stayed at his sister’s Eunice’s home once. She organized a major poetry festival for him in Indiana for years until she passed away in 2013. Sleeping in the room with his desk, which seemed to expand infinitely, I couldn’t bring myself to pull the chair up and sit at it. It was close but I felt as if it were ‘on high.’ I slept near it, curled up, in the bed, feeling small: the bed became a pallet, his desk infinitely expanding.

We remain the students, understudies, of these makers, the furnishings they made things on. Seeing the perfect square of Dickinson’s desk at Houghton within feet of me in the dedicated room, her tableau felt similarly aloft. What is it about the place where these poets nested,  back curved, hovered to write, that underscores their tangible habitation, the ethereal aspects they convey on these finite surfaces?”
﻿

Dickinson scholar Marta Werner kindly shared some of her previous insights (from “Imagining Dickinson’s Desks”) and added a few new reflections, which I have excerpted and arranged here:

“My first vision of the desk was of its unapproachability—roped off, so close and yet so distant. I wanted to see the surface of it—to see if perhaps there were impressions on it left by a pen—or just from pressures of repeated use.

But mostly it seemed fantastic to me. Unreal. It should have been covered with papers—not cleared and blank.

I see, of course, only what I see in the mind‘s eye. For, like [Martha Dickinson] Bianchi, like everyone, I have arrived too late: I do not catch Dickinson in the act of writing. I do not see how she arranges and stab-binds the gatherings of poems we call fascicles, or how she archives them, whether with other bound gatherings only, or intermixed with loose sheets and fragments. I do not see how, or even if, she distinguishes among poems, prose, and passages of indeterminate genre… I do not see her search for a poem written years earlier to revise or only to re-read it.

According to Bianchi, Dickinson’s ‘only writing desk [was] … a table, 18-inches square, with a drawer deep enough to take in her ink bottle, paper and pen … [and] placed in the corner by the window facing west.’

This image of Dickinson’s desk is so familiar to her readers, so imprinted on our imaginations. And yet the desk can only be a supreme fiction.”

Or rather, what I see is always a facsimile. The desk is a facsimile. And the manuscripts upon it, though they are written in Dickinson‘s hand, are facsimiles, too. Their transformation from original documents to altered artifacts began as soon as Dickinson died and left them behind. Since then, they have become ever and ever more―unbound from the aura of the original[s]. We have never seen them except as uncanny doubles, estranged from their first orders and contexts. The aura that arises from them is nothing more, and nothing less, than our longing to have been present in the scene of her writing, in a moment always foreclosed to us.”

Dickinson’s writing desk is about the breadth of a laptop (into which the Internet fits) and is just three inches shy of the width of the Declaration of Independence.

Almost every visitor—including myself—has expressed awe at the dimensions of the desk, which (like Dickinson’s poems) juxtaposes a rigorous physical economy with the capaciousness and metaphysics that emerged from it.

I’ve sometimes wondered if (in addition to the size) the shape of the table contributes to our surprise. It’s possible that the unexpected squareness of Dickinson’s “condensery” presses against some of our latent rectangular assumptions of what a poem is—or, what the verb “to write” looks like.

The small square frame doesn’t seem to support the archetypal posture of someone hunched over a text, but—as poet and wood-worker Oliver Strand speculated the other day—perhaps Dickinson adopted a more multifarious and dimensional stance:

“I wonder if Emily Dickinson sat still while she wrote, or if she zoomed around a lot and dipped down to write a word or a line, like a bee….”

Though she’s become a convenient figurine of self-isolation, Dickinson was in fact decidedly (inter)active. She was immersed in the fecundity of ways in which ideas were formulated and reformed in the 19th century—cross-written missives, postal circulation in lieu of publication, shared books with underlinings (Dickinson would double the line when she agreed with Susan G. and return it post-haste to The Evergreens).

Strand also reminded me that visual artist Agnes Martin once said of her own square formats: They “are never absolutely square … [the grids] are rectangles, a little bit off the square, making a sort of contradiction, a dissonance… When I cover the surface with rectangles, it lightens the weight of the square, destroys its power.”

In this light, I like to imagine the fascicles subverting the uni-form of the desk’s geometrics. As if to say: There are still routes in this room…. The mind has an inviolable right to digress….

Or, as visual artist Makoto Fujimura once said (in an observation we might all draw inspiration from, in our own currently confined states):

For those who have visited the Dickinson Room or her house in Amherst, we encourage you to share your own experiences and insights in the Comments section below. And, for those who haven’t, please know that the room will one day be open for public visits again, and we look forward to welcoming you to behold “the near-distant” belongings (as one poet has called them) of one who has not “failed to touch us all….”

Christina Davis
is the curator of the Woodberry Poetry Room.