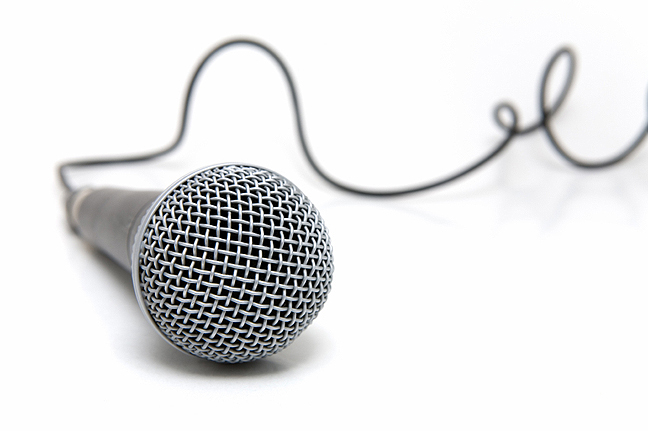 Some variation on this question opens at least 25% of the poetry readings I have listened to and/or attended—especially those in large auditoriums or cacophonous bars. But its repetition, far from rendering the question moot, has only made it the more curious to me.

The question acknowledges the essential uncertainty that marks the outset of a reading and suggests that any communication of this kind “is first of all communication not of something” but of “communicability itself” (Giorgio Agamben).

The uncertainty of whether one is being heard or received—one of the essential questions of transmission—immediately distinguishes the live reading from some of the primary securities of the printed page (or screen) and constitutes one of the first losses of authorial control over a poem, if indeed it can ever be said to have existed. (True, you could say that printed matter includes the uncertainty of whether it is being or is going to be read, but unless it is a handwritten or heavily marked-up manuscript or typescript, once the page is before the reader—in an age of standardized computer fonts—the question of its legibility is rarely a primary one.)

And the question is often directed toward the proverbial “back”: toward the longed-for and furthest persons….

You are a poet, you have chosen the poems/texts you will perform (or maybe you’re winging it, but unless it’s a totally extemporaneous reading, you’re likely winging it within a given range or constraint).

You’ve also chosen what you’re going to wear, decided whether to eat/drink before or after, you’ve said hello to some friends in the audience or the event organizer to establish some security and rapport, and then you step up to one of about four acoustical situations: the fixed and formidable podium mic; the naked and wobbly standing mic; the likely-to-brush-against-your-clothing lavalier; or no microphone at all.

At Harvard, where I host readings, the rooms inform those choices. More often than not there’s a plinth-like podium, a kind of hangover from the life of Fact, the life of Lecture and Information, and other residual modes of presenting “veritas.”

The podium enforces certain postures (both physical and metaphysical) that can be troubling to a poetry reading. Though I did once witness a poet moving the immense podium around the room, Ouija-style, as she leaned into the mic. And others have stood to the side of it, more like Rilke’s standing-desk. And yet others have had Powerpoint slideshows of their text projected on the screen to accompany the sonic or signed incarnation of their work.

(As an aside, which I hope to explore in future posts, I am interested in how certain devices and props—the microphone, the podium/music-stand/stool, the glass/bottle of water from which the poet periodically drinks, the wristwatch or iPhone timer at which the poet demonstratively glances—generate a semi-ritualized sameness across the great gamut of poetry readings and produce a curious congruity in performances by poets of otherwise radically different aesthetics.

In this way, poetry readings can be perceived as structures that we at once resist, reinvent, and/or reify.)

In 1950, at a time when the option of making a studio recording had become a little more commonplace, T. S. Eliot wondered aloud at a poetry reading at the 92nd St. YMHA why—if an audience could choose between his perfected and highly-edited studio recordings and this crowded, acoustically-challenged occasion—anyone would attend what he called a “direct reading.”

In posing the question, he acknowledged a fact that is obvious to many who have attended readings: that hearing the poetry is rarely the entire reason for attendance. Nor, on a practical, logistical, or anatomical level, can hearing even be guaranteed.

And, as Peter Middleton suggests in his keenly-observed and comprehensive essay, “The Contemporary Poetry Reading”—in bars, art-galleries, and other borrowed spaces, the poetry reading is often situated against the cacophonous background of culture itself, from which it does not entirely seek to dissociate itself.

If audibility is a permanent uncertainty (or non-given) of a live reading, what might be the other reasons for attendance?

I’m sure the readers of this blog could expand this list, but I’d hazard some reasons might include the possibility of encountering the physical embodiment and unscripted personality of the poet (let’s face it, despite the purported “death-of-the-author,” the interest in witnessing the poet as an anatomical and vital entity is alive and well); the desire or obligation to socialize with fellow poets and the reader him/her/them-self; the interest in renovating one’s attention (during our otherwise distracted era); the wish to gain entry to a poet’s work via alternative (a.k.a. sensate) exposure; the free food afterwards; and so forth.

Eliot himself introduces another potential reason—from the author’s point of view. He concedes that the perfection of studio recordings does have its disadvantages: making a recording over several days, weeks, or months (as was the case with his Four Quartets), the poet can sometimes be so focused on perfecting the text and producing a definitive recording that the emotion is rendered rigid and uniform—and the directionality of the voice toward a live audience, as well as other idiosyncrasies that context and temporality might imbue it with—can get lost.

So in fact the live reading, while often difficult to hear, communicates—in errancy—other elements.

Poetry readings involve and invite accident and un-hearing, include head-colds, hack coughs, solecisms, slurs, the shuffling of the author’s pages, the rifling of the audience’s programs, slammed doors, cellphones, feedback, laughter, and a veritable litany of unpredictable incidents. And these enter into the poem, and the poem osmotically enters and becomes a member of this ambient.

As Middleton writes: “Instead of thinking of the poem as something that moves around being variously interpreted, read aloud, published in different forms […], we might be better to think of it all as a large heteroclite entity, that mixes texts, people, performances, memories, and other possible affines, in a process that engages many people [… and] whose outcomes are usually hard to see….” (Middleton, Close Listening, 294).

In some ways, the question “Can you hear me?” articulates the existence of this threshold, at once vulnerable and vital, and announces the passage into actuality of the poem, its integration into the molecular and the collective, “which has no clear boundaries”—not the page or the reading —and is (to quote Middleton) “the totality of the field of these elements in time and space.”

CURATOR’S NOTE: I created the “Can You Hear Me?” mix from a range of readings in the WPR audio archive. The voices include but are not limited to: Elizabeth Bishop, Franz Wright, Louise Gluck, Jean Valentine, William Empson (“it’s too cathedral: could you turn down the cathedral?”), Robert Pinsky, William Carlos Williams (“I can’t get close enough!”), and Robert Lowell whose comment about the “psycho-acoustic laboratory” for “speakers who can’t be heard” seemed like the right finale. To identify the more contemporary poets whose voices were cited, I encourage you to peruse our Listening Booth.