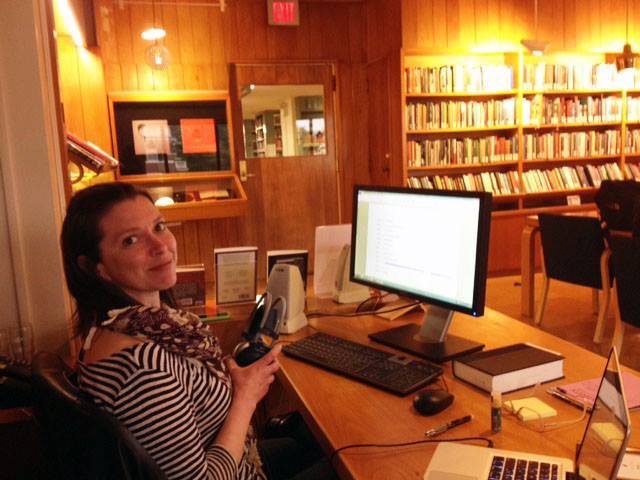 We are pleased to introduce the Woodberry Poetry Room’s new Assistant Curator Mary Walker Graham, who will begin her role next week.

Graham is no stranger to the Poetry Room: that’s her above, listening to the 52nd track of an epic 1976 Robert Creeley recording. You might also have caught her on WBUR back in November, when she was interviewed about our recent participation in a pilot study of the groundbreaking technology IRENE. 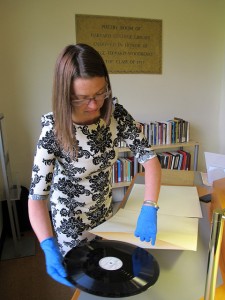 Since joining our merry band in 2013—first as a part of our Simmons internship program and subsequently as a part-time researcher in conjunction with our “Vocalissimus Cassette Digitization” project—Graham has contributed her discipline, insight and intelligence to every endeavor in which she has participated. She has also lent us her ears: at this point, she has clocked over 100 hours of close listening to a selection of recently digitized rare and/or uncataloged recordings by John Ashbery, Elizabeth Bishop, Robert Creeley, Robert Duncan, Amiri Baraka, Louise Glück, Seamus Heaney, and Grace Paley to name a few.

Graham brings a wealth of experience and education to her new curatorial role. Prior to joining the Poetry Room, Mary ran the small but mighty Rope-a-Dope Press (South Boston), publishing letterpress printed broadsides and chapbooks from 2007-2013. She received an MSLIS from Simmons College (2013) and an MFA in Poetry from New England College (2004). At Simmons, she pursued her interests in digital libraries, oral history, audio archives, and preservation. Her poems have appeared in Poetry Magazine, Poetry Daily, Free Verse, and elsewhere. 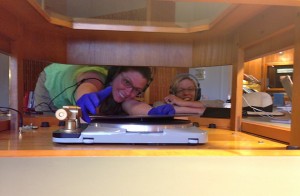 When not spinning discs on the Aalto turntable, Graham can be found spinning out concoctions in the centrifuge behind the bar at Café ArtScience, co-founded by Harvard professor David Edwards and drink master Todd Maul.