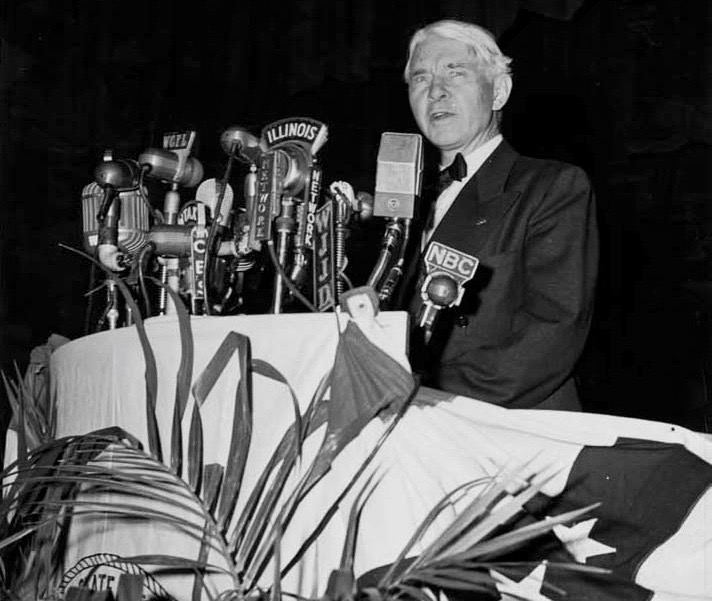 Never before in the story of Mankind was mankind so garrulous….
–Carl Sandburg remarks at Harvard University

I had intended to focus this blog post on the overt, vociferous political critiques (and subtle sardonic jabs) Sandburg delivered throughout his Morris Gray reading. But as curator of an audio archive, I found that the concept of cultural silence took on additional meaning when I set out to transcribe the reels made that day—at the outset of which (in addition to his civic outcry) Sandburg conveys an exuberant, Whitmanic message regarding the then nascent technology of sound recording itself. 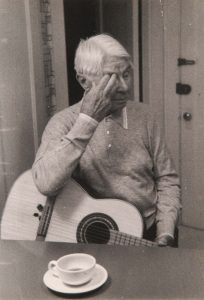 Sandburg’s paean is one of the most technologically-conscious recordings I have yet encountered in the Poetry Room’s collection (other than perhaps Muriel Rukeyser’s “Reading Time: One Minute, 26 Seconds”): it sheds light on how vigorously some poets/writers of that generation welcomed the new opportunity recordings afforded them. For Sandburg, these “devices” (as he calls them) offered the capacity to communicate an era’s comprehensive concerns—about the atomic age and global warfare—without fail to the future.  “Reels” and “platters” would render Whitman’s sonic salvo (voiced in “Crossing Brooklyn Ferry”) into a direct audible commute to “posterity.”

And, in his own time, connectivity—which he ecstatically hails as “numerosity over the Earth” of the instruments with which to be “garrulous”—also offered the prospect of millions of new listeners and dialogues beyond the bounds of state or nation-state, beyond class or literary clique. (On a humorous note: for Sandburg, radio broadcast suggested a world that could conceivably graduate beyond what he calls the Ivy League’s “fraternity of ear wigglers, who had their own code, a Morse Code”).

You can listen to the complete recording on the WPR Listening Booth, which was transferred from “reels” to “platters,” precisely as he foresaw. I recommend listening to his introit in its entirety and his (you might call it) Dylanesque performance of “After the War.”

Here, without further ado, is an excerpt from Sandburg’s opening remarks:

“Now, if all of you young fellers here today were from one congressional district in Nebraska, I would decide to run for Congress!

I think it well too that these lavish words of my old Chicago friend, Mr. [Howard Mumford] Jones, that they are recorded… on tape… and from tape they will go onto platters. And, this ingenious device to which we are indebted. We are indebted to this device—sound recording. We are indebted to equations wrought out by men 50, 60, 80 years ago. They are gone.

And, uh, I was saying to Mr. MacLeish and Mr. Jones on the way over here, I was asking them whether I should report to you that the audiences of future days, Harvard student bodies, may run into tens of thousands and the present living, breathing audience here this afternoon in sizes insignificant to that audience of the future days. I make that explanation so that if occasionally I pause, if occasionally I pause, as to what I am to say to posterity…

… the only thing we’re sure about with reference to posterity (across the next 20 or 40 years) is that they will know a lot more about atomic power than we do.

They will know a lot more about whether World War Three came, or didn’t.

This device here, I was thinking, as my eyes lighted on Memorial Hall, across the way, which has so autumnal an exterior that goes very well with the autumnal exteriors of myself and my fellow poets…. [audience laughter]

Never before in the story of Mankind was mankind so garrulous, never before so many instruments with which to be garrulous. Never before such a numerosity over the Earth, who are all—more or less—garrulous. Four hundred millions in 1600 and now three billions of these bipeds that we call human. Every one of them, more or less, garrulous….”

I’ll admit that Sandburg’s description of “garrulousness” (at a time—alias now—when Americans find themselves faced with a garrulous, recklessly tweeting President) struck a chord with me.

But, of course, Sandburg himself was garrulousness incarnate. It was Sandburg’s capacity to harness garrulousness and gain Populist attention and cred, while summoning from his audiences their native intelligence, curiosity, hope, and civic convictions, that was praised by MacLeish in his introduction to a revised edition of Sandburg’s Complete Poems (published in 1970):

“This was his [Sandburg’s] great achievement: that he found a new way in an incredulous and disbelieving and often cynical time to say what Americans have always known. And beyond that there was another and even greater achievement: that people listened. They are listening still.”

As a somewhat tangential finale to this post, I thought I would share a letter that involves another politically resonant word: “emoluments.”  The emoluments of which MacLeish speaks are a less lucrative, more poetic and Constitutionally-permissible variety than those that Congress may one day need to investigate with regards to our current President and his administration! (MacLeish suggests that he use the emoluments to contribute to his “private account for goat feed”). 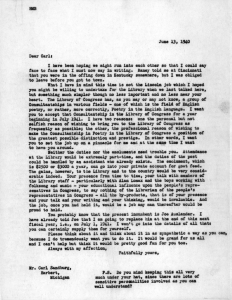 MacLeish to Sandburg, inviting him to be the next Consultant in Poetry at the LOC. Courtesy of the Library of Congress.