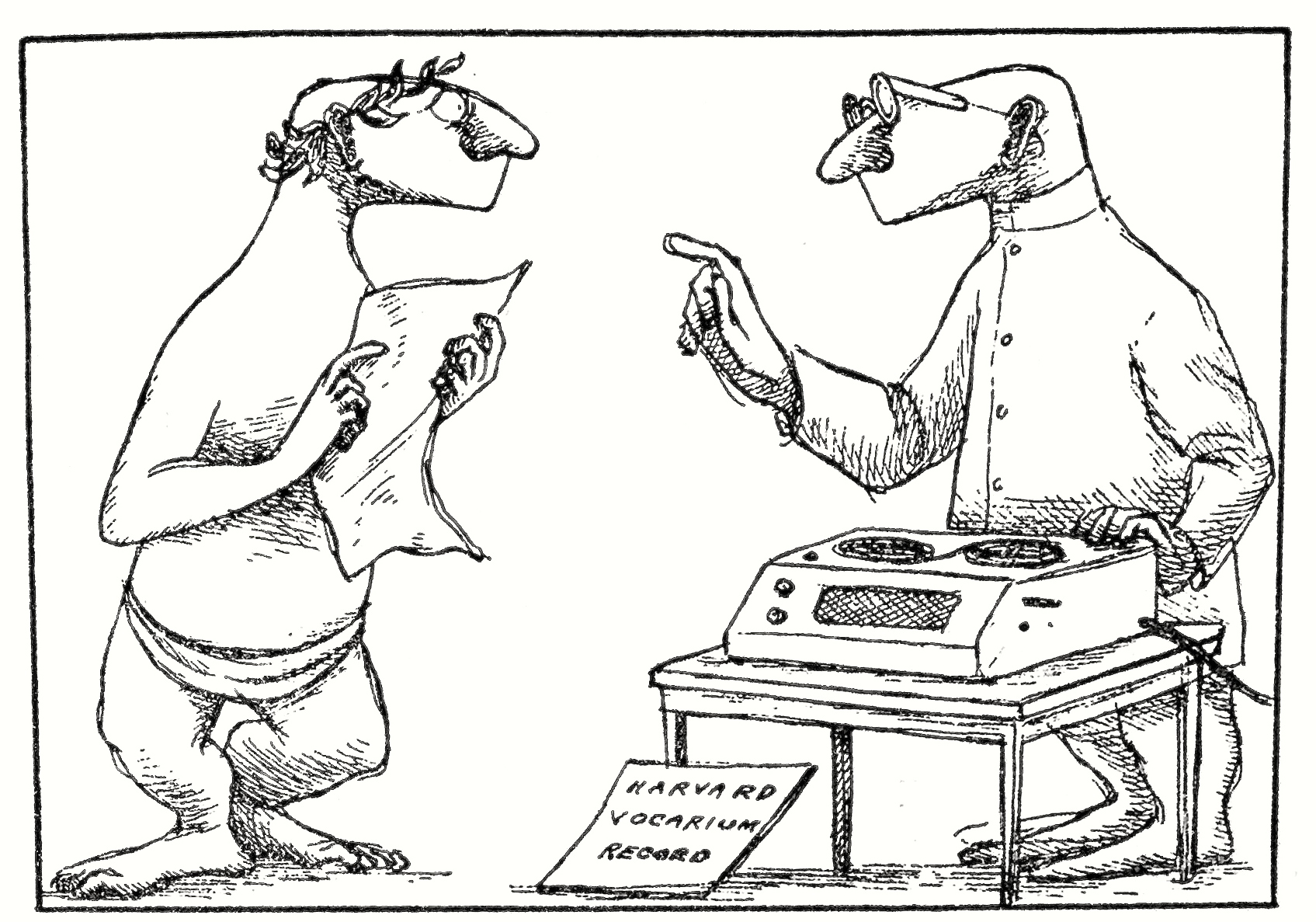 You could say he was the Alan Lomax of poetry recordings. As the founder of the Harvard Vocarium (1933-1955), one of the first poetry record labels in the world, Frederick C. Packard, Jr., was responsible not only for making the earliest extant poetry recordings of T. S. Eliot, Ezra Pound, Elizabeth Bishop, Robert Lowell, Muriel Rukeyser, Randall Jarrell, and Marianne Moore, but also for capturing (in some cases for the first time) the works of a dynamic range of poets and performers composing in Gaelic, Yiddish, Afrikaans, and Haitian Creole. 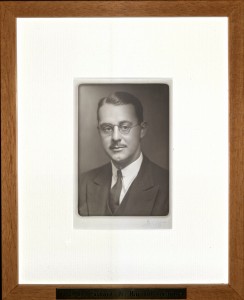 As an associate professor at Harvard’s Speech Clinic and the university’s first professor of public speaking, he had both a physiological and metaphysical relationship to the voice. He was convinced that the spoken word was to be the instrument of the age and that (if radio broadcasts in Europe were any indicator) the United States needed to educate its next generation of public speakers as a counterpoint to the hypnotic effects of fascist broadcasts and rallies. He considered poetry to be essential in of itself and also as a vital instrument in the teaching of vigorous and compelling rhetoric for a new era.

For him, sound recording was also inherently multidisciplinary. Just as sound passes through walls, so too his sonic experiments defied the emerging boundaries between academic fields and disciplines. Packard approached with equal “gusto” (to use Marianne Moore’s cherished word) the recording of surgeries, sermons, marching bands, political speeches, Poets’ Theatre rehearsals, Mexican folk songs, Scottish border ballads, memorial services and building dedications, as well as campus visits by everyone from Muhammad Ali to Fidel Castro, and the list goes on. 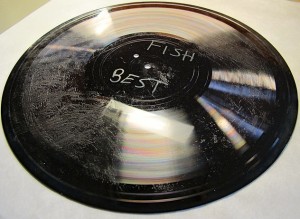 This year, the Woodberry Poetry Room received a Hidden Collections grant to create the first comprehensive Finding Aid for the pioneering recordings made by Packard, an undertaking which will begin to honor the plethora, depth and range of his documentary endeavors. We are pleased to announce that Mary Walker Graham (our current Assistant Curator) has been hired for a nine-month post as the Audio Archivist for this crucial project. Additional funds from this grant have also allowed us to invite Josephine Packard, a scholar of her grandfather’s work and the author of the first Harvard Vocarium discography (Harvard Library Bulletin, 2004), to consult on the project. 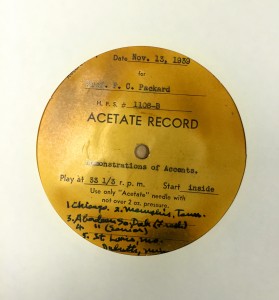 The Poetry Room collection of Packard recordings includes over 2,000 unique audio materials associated with the Harvard Vocarium record label (among them, test pressings, stampers, lacquer, glass, shellac and vinyl discs), as well as hundreds of non-Vocarium discs documenting significant initiatives in Harvard’s (and America’s) history—including the teaching of Japanese to U.S. military during WWII and the experimental linguistic research conducted by Packard’s Speech Clinic. 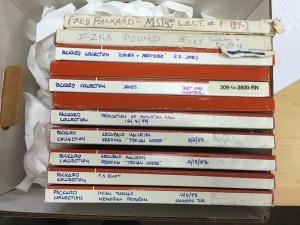 In 2014, a small preliminary grant allowed the WPR staff to assess the condition and document the contents of over 750 of these discs. This year’s Hidden Collections grant will permit us to complete the audio survey by integrating this preexisting data and identifying additional materials and rare outtakes that would be appropriately included under the Packard Collection rubric. The audio archivist will also develop a framework for organizing and rehousing the materials.

Thanks to the generosity and enthusiasm of the Harvard University Archives, we will also be working to create a box list of their impressive collection of unprocessed Packard reels to add to the Finding Aid. A mere glance at the reels in the Archives reveals the possibility of uncovering a range of rare recordings, including one of Dylan Thomas’ last readings, in May 1953, which John Malcolm Brinnin once described thus: 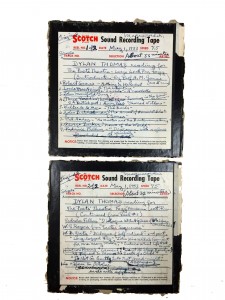 “… [H]e was to read at the Fogg Museum at Harvard under the auspices of the Poets’ Theatre. He was uncommonly apprehensive about this evening, perhaps because he now had many friends and acquaintances in the Harvard community. In any case, he chose a large group of his best reading pieces and put new touches to the little speech he was now in the custom of giving as an introduction. The large courtyard of the Fogg was jammed to the doors. After he was presented to the audience by Howard Mumford Jones, he launched into one of his greatest reading performances and was rewarded with storms of applause between each poem.”

After the nine-month project is complete, we look forward to making the Finding Aid available to scholars, students, readers and listeners worldwide, and we hope to seek funding for a comprehensive digitization/preservation initiative that will at long last render Packard’s “library of voices” a reality. 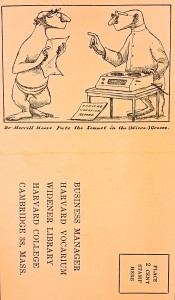 Curator’s Note: The Harvard Vocarium sketch used as the header to this article was designed by Edward Gorey (Harvard Class of 1950) to advertise Packard’s recordings of Merrill Moore.