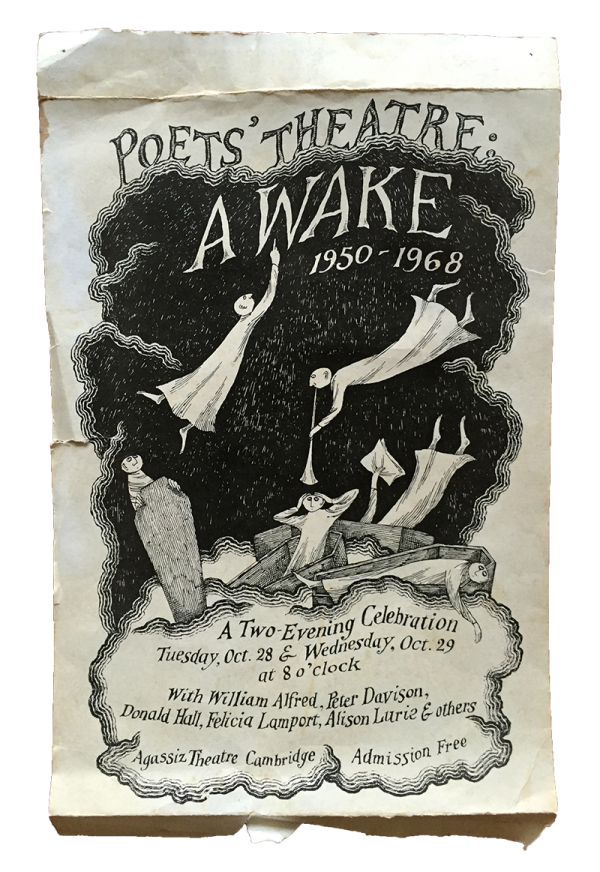 The Poets’ Theatre was a small Harvard drama group whose valiant but amateurish productions of rather highbrow verse-plays always struggled to pull in an audience. Although it contained a few notable alumni, it’s now largely forgotten by theatrical history. The Poets’ Theatre was one of the earliest venues for experiments in poetry performance. Its collaborations between poetry, dance and mime, and its innovative ways of involving the audience pre-date the turn to multimedia and participative poetry in the 1960s. Poets who performed and acted there would continue to change what poetry could do for the next half-century.

Both of these statements are true, although the second needs a qualification: and still nobody’s heard of it.

In histories of modern poetic drama, the amateur successes of the Poets’ Theatre are eclipsed by Yeats’ Abbey and Gate productions and those of the Living Theatre in New York City, though in fact the Poets’ Theatre had strong links to both of these venues. In histories of poetry, meanwhile, the page-based lyric is so dominates the narrative that the Poets’ Theatre becomes an occasional footnote to the careers of the great poets who wrote or performed there: among them, Frank O’Hara, John Ashbery, Dylan Thomas, W. S. Merwin, James Merrill, Ted Hughes, Fanny and Susan Howe. It does not even feature in David Perkins’ great History of Modern Poetry. Nor does it feature in almost any history of performance poetry, because “performance” is frequently invested in the authentic and is uncomfortable with work so consciously staged. 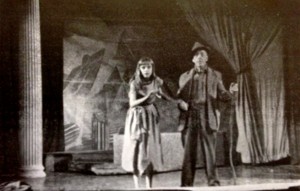 But the Poets’ Theatre is important exactly because of the interplay between the staging, the amateurism and the poetry. The Poets’ Theatre was where poets learned to perform – to take the lyric out of the airless, sealed chamber of New Critical ideology and put it back among an audience. It was where the participants tried to figure out how to construct a whole situation which was poetic, not just the words. And though some of the scripts almost sank it, what failed as drama would often reappear, transformed, into new kinds of lyric. The unavoidably intimate relation between artist, audience and the moment (guaranteed by tiny premises and in-crowds) would nourish the Confessional poem. The mismatch between huge dramatic resonance and the theatre’s lack of a star would return in the anti-humanist poems where language ranges far beyond the ken of a speaker. Plays that altered in the rehearsals would encourage a way of making poems that spontaneously draws in the world around them, poems which foreground process as much as the result.

Though an earlier incarnation of the ensemble–the “Poets Theatre of Harvard”–staged T. S. Eliot’s Murder in the Cathedral in 1937, the Poets’ Theatre as we know it really got its start in 1950 when, during the first evening of solo readings (on November 28, 1950, at Kirkland House), William Lyon read “The Objective of the Poets’ Theatre.” His manifesto demanded good new drama from writers and held up as standards and as provocations the “imported verse-plays of Mr Eliot and Christopher Fry, by the verse experiments and dust-raisers of the thirties and forties such as those by Auden, Isherwood and Spender in the Group Theatre… and more recently the printed plays of our indigenous William Carlos Williams” [Poets Theatre MS Thr 833.543, Houghton Library, Harvard University]. Opposing themselves to all mass media and commercial drama, the new Poets’ Theatre declared that it was “determined to make language the focal point of the theatre,” rather than, say, character or plot.  This didn’t bode well for the acting, but the experimental brief did give them license to try every kind of format, from full-staged drama to solo readings to semi-staged “concert readings,” where a work-in-progress could be tried out and improved by suggestions from the audience.

The results were nothing if not eclectic. The first theatrical night, February 26, 1951, included Frank O’Hara’s homecoming melodrama-cum-Noh play, Try! Try!, complete with a meta-theatrical note left on every seat telling the audience they should have dressed more appropriately for ritual theatre – and then an explosive interruption from Thornton Wilder, who felt that the audience were not hearing the productions with the reverence this momentous occasion in grass-roots American theater deserved either. 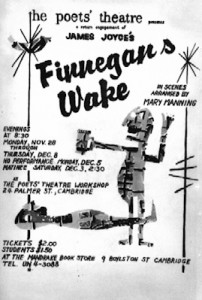 They put on exotic European imports, like René Char’s balletic The Man Who Walked in a Ray of Sunshine, and earnest home-grown efforts like Lyon Phelps’ The Gospel Witch, a play about Salem fated to be overtaken by Arthur Miller’s. They staged the solemnity of Yeats’ Purgatory and the cheerful absurdity of Ashbery’s Pirandello-style comedy, The Compromise. Readers included metrical conservatives like Richard Wilbur, so-called Confessional poets Anne Sexton and George Starbuck, and professional circuit performers like Dylan Thomas and Louis MacNeice. Kenneth Koch and James Merrill sent them plays, and there was a brilliant adaptation of Finnegans Wake (by Mary Manning Howe). Even Gregory Corso had a brief stint with the Poets’ Theatre, as a janitor.

As the repertoire suggests, the Poets’ Theatre always involved some rather unlikely alliances. The hot room where the poets gathered in 1950 included the likes of Richard Eberhart, Robert Bly, Frank O’Hara, Donald Hall, Hugh Amory and O’Hara’s friend and muse V. R. “Bunny” Lang, warily figuring out who else was there “like strange dogs sniffing one another,” as Phelps, another founding member, recalled [Poets Theatre MS 837.533, Houghton Library]. They gained some academic respectability from the involvement of I. A. Richards – who would host a Poets’ Theatre event to try out his own play, A Leak in the Universe – and Frances Fergusson, whose The Idea of a Theatre, then just-written, was the first book to trace the evolutionary line of descent between the ritual theatre of Ancient Greece, the Medieval Mystery plays, and the anti-mimetic modernism of Cocteau, Jarry, Yeats and Eliot. But they got real publicity from connections to the 92nd St Y’s director John Malcolm Brinnin, whose poetry-performance circuit brought them MacNeice, Spender and larger-than-life performances by Dylan Thomas. His solo readings – with large gate receipts and after-show parties that provided gossip for months – included the first performance of Under Milk Wood, then still unfinished.

Unskilled in dramaturgy or voice-production, the poets were also given sorely-needed practical direction by Mary Manning (“Molly”) Howe. One of the founders of the Poets’ Theatre, Howe had been an actress at the Abbey and then the Gate. A lifelong admirer of Yeats, after her marriage to the American lawyer and constitutional historian Mark DeWolfe Howe, she tried to recreate something of the excitement of Dublin’s modern theatre in the conventional surroundings of Cambridge, Massachusetts. And sometimes Molly’s two daughters, Fanny and Susan, then still schoolgirls, would perform.

The following interview (with Fanny Howe) provides a glimpse of this remarkable institution, with its boundary-crossing combinations of modernist and postmodern, European and American, conservative and radical, text and voice.

In two separate oral history conversations recorded in conjunction with the Woodberry Poetry Room in the winter of 2014, both sisters remembered their mother’s dynamic and comforting presence. Fanny recalls how Molly’s Irish background made it natural to connect high modernism to the folksong, while Susan recognizes the influence of her own early acting experiences on her current performance works with David Grubbs:

“This performance piece that I’m doing with Grubbs [the interview was conducted prior to a performance of WOODSLIPPER-COUNTERCLATTER], it seems to me a return to whatever eccentricity I was experiencing while not understanding then. It’s come out in me, again…in a new way that might not exist without the old.”

They also both emphasize the role the Poets’ Theatre played as a vibrant social scene, a relatively safe space for gay writers in the McCarthy era when even Harvard Professor F. O. Matthiessen would commit suicide for fear of exposure. Supported by the efforts of Dorothy Richards and other faculty wives, the Poets’ Theatre was (they now realize) also an early feminist site, an organic structure where women could be as important as men. But at the same time it was a place of enormous rivalry and competition. “Drama respects life on both sides of the footlights,” claimed the original manifesto, but – as the memoirs of Alison Lurie or Nora Sayre confirm – the productions frequently re-staged those conflicts as part of the show.

At heart, the Poets’ Theatre was an attempt to create a new kind of relation with poetry’s audience. ‘The training of an audience is inseparable from the training of its poet-playwrights,” Lyon had said on the opening night, for the audience are those “from whom artistic refinements and even plays might come.” He added, “if you look around the audience tonight you will see persons present who are seriously concerned, not only with the art of language which acts in the art of the theater, but… music, painting, architecture, design, and photography – have I left any out?”. For the Poets’ Theatre, audiences and artistic collaborators would be one thing, an aesthetic which, as Susan Howe remarks, made the Poets’ Theatre an avant-garde well before its time:

“I can see them making demands on the audience like that, I mean it really is more akin later to Language poetry…. I think it’s sort of a presage, or presages what Cage is going to do. And what Yvonne Rainer is going to do with dance. And the happenings.”

It’s not just the avant-garde, though. One of the strongest trends in American poetry over the last half century has been towards poems that make drama out of the tension between poet and listener, from slam poetry readings to academicky metatheatrical high jinks, from poems exploiting the poet’s vulnerability to poems riding on the impersonal machinery of media reproduction, poets have wanted to make poetry out of their audience and their auditoria, to use the setting in which they are heard. Of course, this reflects a profound self-consciousness about poetry’s lack of an audience, But there, too, the Poets’ Theatre was present at the beginning, trying to do something about it.