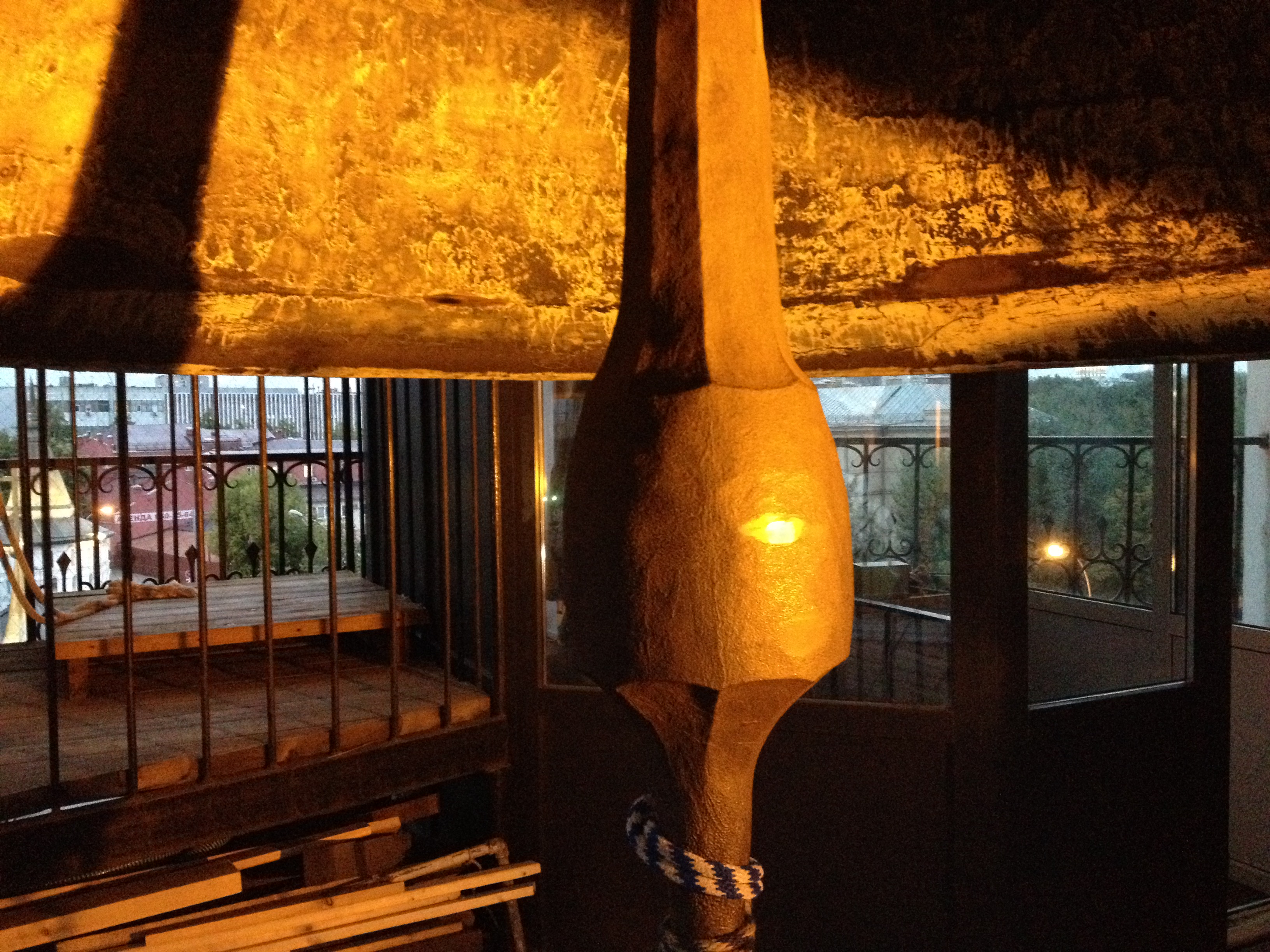 —from “The Bells” by Adam Zagajewski

This is the sound of the Letecks foundry outside Moscow in Russia. The screech of metal polishers, the roar from the container of molten metal, and hiss of hot wax being poured into their molds. It is here, in this enormous industrial warehouse, that some of the holiest icons in Russian Orthodoxy are born.

It’s incredible that such a cacophony will result in a sound like this.

Bells. In Russian, kolakol. For centuries, the art of casting bells has been developed and refined, with craftsmen producing enormously heavy instruments that are both feats of engineering and beautiful artifacts of metal iconography. 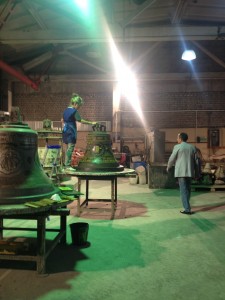 In Russia, bellringing takes on a much different form from the bells you might hear in the rest of Europe or the United States.

For one thing, melody is not the focus of Russian bellringing. Sets of bells are made up of individual instruments cast hundreds of years apart. So the pitches in a set of bells are not arranged in a scale. Instead, Russian bellringing is rhythmic, so the same patterns can be played in many different bell towers, no matter the tones of the bells in each set.

Russian bell towers are set up differently as well. Certain bells are designated for “trills”—which means their clappers (the little tongues that ring against the inner lips of the bells) are attached to a group of ropes held in one hand like the reins on a horse. Other bells are rung by pushing or pulling wires in a row, and still others by stomping on a plank attached to the bell’s tongue. The largest bells must be rung by swinging the clapper back and forth from inside the bell.

To be up in a bell tower when bellringers are playing is like being in the lair of a large spider, with wire webs twitching overhead and all around the sensation that the air is quivering with sound. These bells are so huge and so strong that when they are rung, it is not so much a pitch that results as a bodily sensation. Your chest aches with the vibrations, or else your metal necklace buzzes with energy.

In the Russian Orthodox tradition, bell peals—combinations of rhythmic patterns—announce church events. This particular peal is called a “welcome peal” and would be played at the start of a worship service. Other peals might be used in a consecration ceremony, when the harvest foods are blessed, or when the priest blesses his congregants by drawing oil crosses on their foreheads.

Though bellringing has been around for most of Russia’s history, the 20th century was not good to Russian bells.

Starting with the Russian Revolution in 1917, the Russian Orthodox Church and its bell towers were destroyed. It wasn’t a pretty time for religion: thousands of priests, monks, nuns and other clergy were executed, along with several thousand family members of clergy and Christian believers. Their sound died with them.

Bells were pushed from towers and the resulting shards of ancient metal were melted down, sometimes for weapons and sometimes to be made into statues of the Soviet Union’s new heroes—writers, artists and political thinkers.

In an attempt to save the bells from peril, some were buried underground, some hidden in amphitheaters, or shipped abroad. On the off chance that bells were saved from the scourge of communism, World War II offered another danger. In Novgorod, the location of the Russian front during World War II, many bells were battered by stray artillery fire. The largest bell there was put on a ship to be taken to safety. Halfway across the river, however, the ship was sunk by a bomb and the bell spent two years at the bottom of the river. It lost its ears—the topmost parts of the bell—in the river.

Only a handful of complete bell sets survived the destruction of the 20th century. One of these sets, belonging to the Danilov monastery in Moscow, was purchased by an American in 1928 and shipped to Harvard University. 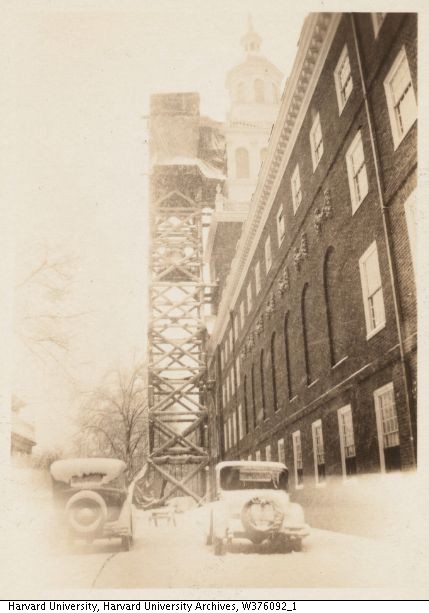 Father Roman (interviewed in August 2015): I think the first time I heard about bells was in 1988.

Virginia Marshall: Hierodeacon Roman is a Russian Orthodox monk and the head bellringer at the Danilov Monastery.

FR: I read in a book about Sarajev and that set of bells in the Danilov monastery… It would be so great just to listen to those bells. [laughs]

VM: Konstantin Sarajev was a famous bellringer in Russia in the early 20th century, possibly the best bellringer Russia ever had. He claimed that he could hear 121 pitches within one half step on a Western musical scale. That’s like dividing blue into 121 distinct colors. When Sarajev was asked to help Thomas Whittemore choose bells from the Danilov Monastery to purchase, he was delighted. He wrote about the rich tones he could hear within each bell.

Seventeen bells were chosen and installed in Lowell House by 1931. They hung in Cambridge, puzzling generations of students, for nearly eight decades.

By the 80s, back in Russia, at the other end of the bell purge, Russian Orthodox churches were beginning to open up again. And they wanted their holy instruments back. Facing a country full of murdered bells, Lowell House’s bells were among the few sets to survive.

FR: We sent a letter to the President of Harvard University to learn about bells, just to discuss if it would be possible to exchange them…. In 2003, we were invited by the President to come to Harvard University. It was a legend for me. Of course I was shocked by their size, and they were decorated with some familiar icons of our saints. It was unusual to see that in English architecture.

Over the next five years Harvard University and the Danilov monastery organized a massive bell exchange. Seventeen ancient bells were shipped back to Moscow, and seventeen new bells were cast in Russia and sent to Harvard. These new bells are still played by students every Sunday. While a student, I was part of this group. And this summer, the Lowell bellringers traveled to Russia to learn more about the bells and their peals. 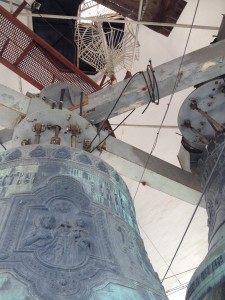 The largest bell of the Danilov set, hanging in Moscow in 2015, returned to its original home.

Father Roman told me how thrilled he was to see the original Danilov bells at Harvard in 2003. I felt a similar giddiness when I saw the same bells hanging in the Danilov monastery in 2015, finally returned to their home. They were like sleeping giants ready to wake and shake the air with their sound. After my summer in the archives at Houghton Library and the Woodberry Poetry Room, I have come to be more attuned to the necessity of preservation. These bells were preserved at Harvard and played for years before they were restored to their original home. The system was a lot like a library: the bells were being played during their stay at Harvard, not just locked in a room until someone came looking. Like the rare recordings and manuscripts at Houghton, preservation and use went hand-in-hand.

When the bells were destroyed in the Soviet era, many of the peals disappeared as well. Those who knew how to ring the bells were murdered or died of old age before the push to revive and rebuild Russia’s churches. Many bellringers are trying to compose new peals that mimic the sound of old Russia. One of the records they can turn to is a musical score like this one.

In his Suite No. 1 for two pianos, Sergei Rachmaninoff composed one piece titled “Russian Easter,” inspired by the pealing of church bells in his hometown.

Rachmaninoff needed two pianos to represent the complex patterns in Russian bellringing. And from this score, the Danilov monastery bellringers created what could have been the original peal that Rachmaninoff heard in the late 19th century. 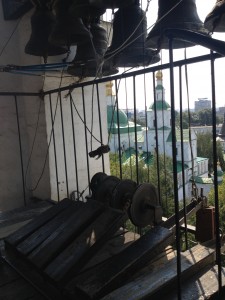 The view from the Danilov bell tower to the monastery square below.

We played this peal you’re hearing now at the end of one of the services and watched the congregation below pour out of the church, look up at us in the bell tower and cross themselves as the wave of pealing washed over them. The peal is a double translation—from bells to Rachmaninoff to bells again—so it’s not perfect.

It’s rather like a poetic translation; the trill beats acting as a poetic meter that must be maintained, the melody much like the meaning of a poem. The peal is not so much translated between languages as between time periods. What we were ringing up there in the bell tower was like a resurrected peal. It was alive because bellringers are still creating, playing and believing in the art of bellringing.