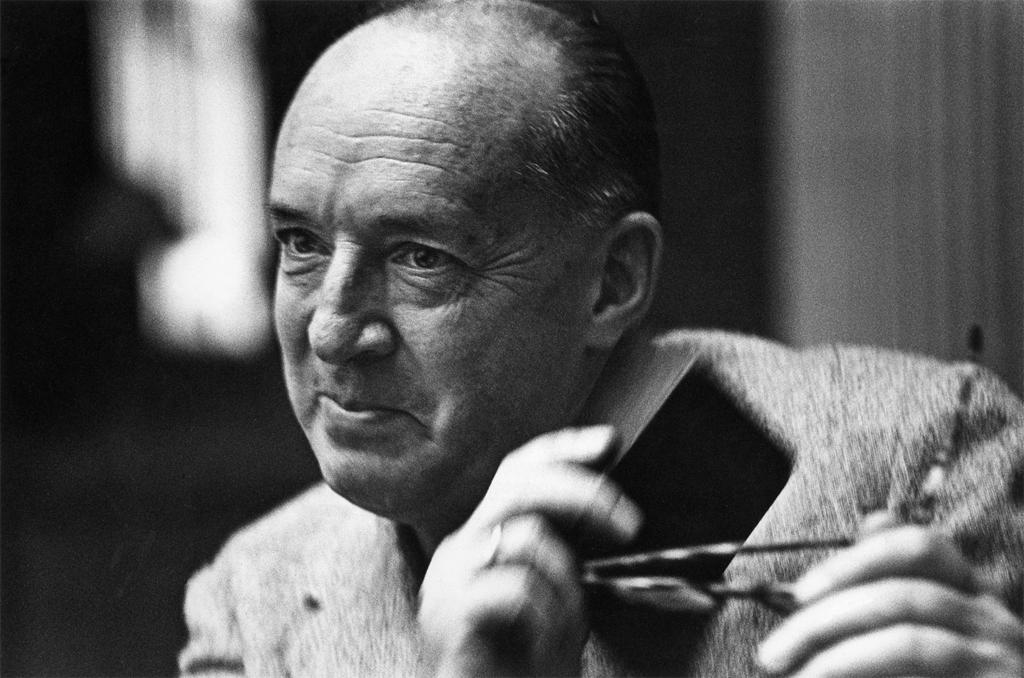 I now pass to my own stuff. And in order to soften the transition—a gap of a hundred years, after all—I shall start with a poem about a Russian visiting speaker. He’s supposed to be talking about Russian language and literature to a group of…

This is Vladimir Nabokov, speaking to a gathered audience at Harvard University in 1952, when he came to record a few of his own poems along with translations of Tyutchev, Pushkin, and other Russian poets. You can be sure that, throughout each recording, every word was meticulously prepared. Nabokov was famous for writing down everything he planned to say beforehand.

In the heavily edited book of Nabokov’s interviews, Strong Opinions, he writes: “I think like a genius, I write like a distinguished author, and I speak like a child… I have never delivered to my audience one scrap of information not prepared in typescript beforehand and not held under my eyes on the bright-lit lectern.”

…all hangs together—shape and sound,
heather and honey, vessel and content.
Not only rainbows—every line is bent,
and skulls and seeds and all good worlds are round,
like Russian verse, like our colossal vowels:
those painted eggs, those glossy pitcher flowers…

(“An Evening of Russian Poetry,”
recorded by the Woodberry Poetry Room, 1952).

This is the fifth episode of Reel Writing: Poems and Prose Off and On the Tape Reel, brought to you by Harvard University and the Woodberry Poetry Room. I’m Virginia Marshall. Today: Vladimir Nabokov, his speech, his writing, and his ear.

…that swallow whole a golden bumblebee,
those shells that hold a thimble and the sea.
Next question…

What is interesting about Nabokov’s poetry is that—despite his resistance to speaking without a prepared script, and his self-conscious, self-labeled ‘childlike talk’—his poetry in English is a playground of rhymes, alliterations, and puns. Listen to how he strings along the English words, as if cinching the vowels together like linen on a laundry line:

…heather and honey, vessel and content.
Not only rainbows—every line is bent…

This is Tatyana Gershkovich, a PhD candidate in Slavic Languages and Literatures at Harvard. Her research focused on sound in Nabokov’s prose and how it relates to his unique narration. In Gershkovich’s words:

You can hear a bit of the ‘layers of narration’ that Gershkovich is talking about in this recording. Before Nabokov reads the poem “An Evening of Russian Poetry,” he says to his audience:

… in this poem, it is not quite Nabokov speaking. It is a retrospective projection of a Nabokov, still with one foot in Russia. Which has been removed since.

He defines the speaker in the poem as partially Nabokov and partially a fictional person, a former self, or as he says: ‘a retrospective projection.’

When Nabokov writes, he creates a self on the page. That’s what makes his narration interesting for so many scholars; the characters are often distorted shadows of the author. But there is also a connection to be made between the Nabokov who writes these words, and the prepared, polished Nabokov who reads them aloud for a tape recorder or a live audience. The speaking Nabokov is a persona as much as the Nabokov in narration is a kind of persona.

But it is not only Nabokov who talks to us through his narration: Gershkovich pointed out that Nabokov makes the readers talk to themselves using his words.

TG: He tells his reader what to do a lot of the time. He will prompt me to read some words aloud: ‘Lolita’—the way that he describes those sounds in one of these sort of gestures.

Lo-lee-ta: the tip of the tongue taking a trip of three steps down the palate to tap, at three, on the teeth. Lo. Lee. Ta.

TG: And in order to really, sort of appreciate it, you often have to read it aloud.

I wonder—was Nabokov trying to get his readers to be moved to speech so that they might scrutinize their own verbalizations as he must have scrutinized and obsessed over his own?

Stephanie Sandler: We hear a text differently from what we see on the page.

Stephanie Sandler, professor of Slavic Languages and Literatures at Harvard.

SS: When we think of Nabokov, we think of that kind of layered speech; self-referential, speech, word games, he plays word golf, he teaches us how to play word golf, mixes in other languages, he teases us because we don’t get his jokes…

Another way that Nabokov seems to point with waving hands to the sounds in his compositions is by using perhaps too many puns for a native English-speaker. It is almost intimidating to keep up with a writer who plays so deftly with a language that is not even his mother tongue.

TG: He’s always punning, so sound is important there… This is an immigrant. I find that my dad does this a lot too. I wonder if immigrants—people working between two languages—are interested in that kind of play.

Sandler teaches Nabokov’s novel Pale Fire to one of her classes, and as part of the curriculum, Sandler brings her students into the Woodberry Poetry Room to listen to Nabokov read the text aloud.

SS: We see words on a page, and the words come to life so vividly if we can hear them in the writer’s own voice. The cadences, the rhythms, the places where they pause where we might not have paused mentally as we are reading the words on the page. The things that they do that are slightly different, which is inevitable, either because it’s a slip—they make a slight mistake, which is always incredibly interesting—or because they have changed something…All of that give us so much more to think about and it creates a kind of aura or surround or context for the poem or the story, whatever it is that they are reading or performing for us.

She says her students find it particularly interesting to hear Nabokov read because of his unique accent.

SS: They know: Vladimir Nabokov, Russian writer. The first several decades of his career writing in Russian, switching then to English. So their expectation is that there will be a thick Russian accent. There’s definitely not that. There’s a layer of British English, and there’s a little bit of a layer of French. So it’s a surprise to students to realize that layering has both to do with how he learned his English…but he also was living in Switzerland at the time and of course also knew French extremely well.

Nabokov’s voice itself tells a story and carries with it a different kind of layering. This is not the levels of narration and authority that Gershkovich researches, but layers of personal history and education. You could find these stories in any voice, if you listen carefully enough.

The wind, which is driving him mad (this recalls
a rather good line in Hugo),
keeps making blue holes in the waterproof gloss
of college-bred beauties, all legs, as they bicycle through
his shoulder, his armpit, his heart, and the two
big books that are hurting his side.

This all brings me to question if it is possible to understand—not so much Nabokov’s fondness for sound—but his ability to listen. How can we gain entrance to, not just his voice, but his ear?

I find it amusing that in Strong Opinions, Nabokov mentions more than once his inability to appreciate music and his total dismissal of noises and sounds too soft elicit one’s full attention. In his own words, Nabokov wrote that he wanted to “wring the neck of soft music in public places.”

When I asked Gershkovich about this question, she was skeptical.

TG: I don’t know. I don’t know how productive it would be to talk to Nabokov about his own works. Right, so you’ve read Strong Opinions and it seems that he obfuscates a great deal. So I don’t know. I think I would maybe ask him lots of things but I don’t think I could take anything he says a face value.

I think there might be something to be said for the way that Nabokov listens. Here is an author who was so interested in depicting noise in his writing and playing with the sound of speech in three different languages. Perhaps small sonic disturbances take up more space for Nabokov. Perhaps the world of sound was alive for Nabokov in some very sensitive way, and that is what he calls attention to in his writing.

Crash!
And if darkness could sound, it would sound like this giant
waking up in the torture house, trying to die

Take this poem, for example. If you didn’t know what he was talking about, you might think the speaker had encountered a horrible monster. But the poem is in fact an ode to a particularly noisy refrigerator that kept Nabokov awake while staying at a friend’s house.

and not dying, and trying
to cry and immediately crying
that he will, that he will, that he will do his best
to adjust his dark soul to the pressing request
of the only true frost
and he pants and he gasps and he rasps and he wheezes:
ice is the solid form when the water freezes;
a volatile liquid (see “Refrigerating”)
is permitted to pass into evaporating
coils, where it boils,
which somehow seems wrong,
and I wonder how long
it will rumble and shudder and crackle and pound…

(“The Refrigerator Awakes,”
recorded by the Woodberry Poetry Room, 1952).

I don’t know about you, but I’ve never thought to listen a refrigerator with quite so much attention. I would have tuned it out. But Nabokov is making us listen.

This is Virginia Marshall, and thank you for listening to this episode of Reel Writing. On this episode you heard Shastakovich’s Jazz Suite No. 2. Until next time.