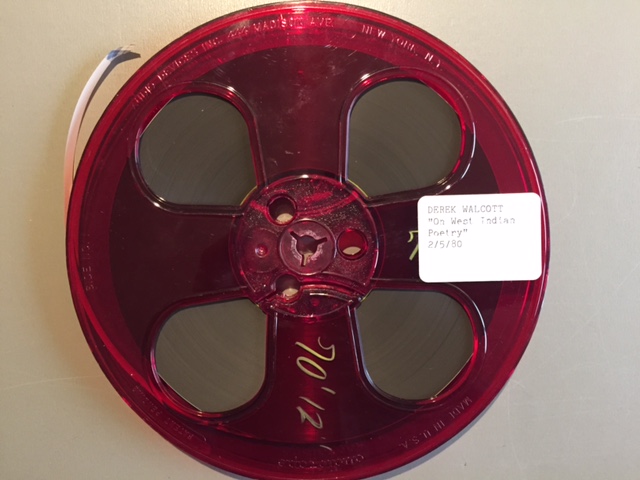 This past January, just as the first snows fell and, thankfully, well before the epic winter that buried Beantown, I enjoyed a week of close listening in the Woodberry Poetry Room. This was a much-needed respite from the daily bustle of academia in order to conduct research for my current book project, Atlantic Reverberations: The Sonic Performances of Black Diasporic Poetries. Prior to my arrival, Christina Davis and Mary Walker Graham arranged for a long playlist of recordings, preparing me for a wonderfully productive week of filling my ears and notebooks. 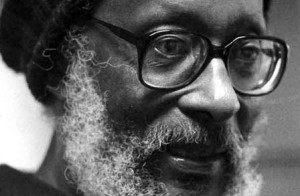 My project interrogates the foundational question of language for Postcolonial, Black Diasporic, and African American writers by turning explicitly to its sonic articulations. I consider, for instance, how sound storage and reproduction technologies shaped the compositional and performative strategies of poets during the rise of cultural nationalism in the middle of the last century. Initially, I investigated the WPR’s archive, as well as combed through the HOLLIS online library catalog, with the hope of locating a recording of a 1979 lecture by Edward Kamau Brathwaite, which I believe he delivered at Harvard, on the languages of black diasporic poetics—what he calls “nation language.” New Beacon Books subsequently published this lecture in 1984 as History of the Voice: The Development of Nation Language in Anglophone Caribbean Poetry. The recordings that Brathwaite played during his talk haunt the essay:

How do we understand the status of “noise” in this mute text? In silently reading, what sound do we get a feel for? The recorded performed voice is a key animating principle of Brathwaite’s theory of nation language. Which is to say, Brathwaite does not attempt to restore a silenced voice but rather finds ways—through the medium of sound technologies—to articulate the multitudinous possibilities of the “sound” for black diasporic poetics. He plays, for example, a recording of Claude McKay reading his sonnet “St. Isaac’s Church Petrograd,” which is available on Folkways 1954 compilation, An Anthology of Negro Poetry, produced by Arna Bontemps. While Brathwaite describes McKay—who published two volumes of dialect poetry before turning to so-called Standard English verse forms—as forsaking his nation language for the sonnet, he insists that, “the only thing that retains its uniqueness here is the tone of the poet’s voice” (21). But as a term that encompasses a range of sonic and literary concerns, the notion of tone is tough to parse, even more so when the material conditions of sound recording and reproduction are taken into account. In other words, if for Brathwaite tone names the possibility of nation language in the “sound” of McKay’s recorded vocal performance, to what extent is the tone a mediated effect of the recording?

This idea of tone importantly informs other poets’ work during this period such as Derek Walcott. And, while I have yet to locate a recording of Brathwaite’s talk, in searching for it, I found a number of other recordings in the WPR archives of poets such as Langston Hughes, James Weldon Johnson, Joann MacFarlane, Aimé Césaire, Jacques Romain, Jean “Binta” Breeze, Sherley Anne Williams and Rita Dove, which now crucially inform my project. 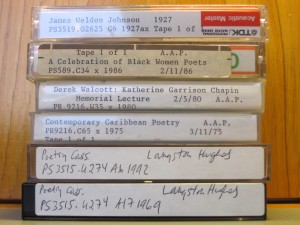 “Tone” is an expansive term, encompassing textual and aural elements related to speech, song and prosody, but it is also a slippery notion that gestures toward questions of affect, subjectivity, mood, performance, and rhetorical context. In the classic literary sense, tone denotes a writer’s attitude toward the subject of her work as well as her perception of audience, informing the grounds of reception.

From this perspective, tone can be understood as what Charles Olson, in “Projective Verse,” speaks of as a poet’s “stance toward reality.” A reader, by extension, detects tone through close attention to a poet’s formal construction of a poem. This is one way to interpret Ezra Pound’s term “melopoeia”: how a poem’s sound is intrinsic to its formal qualities. But when understood in this manner tone has little to do with the actual sounding—let alone, the recording—of a poem in performance, unless read aloud by the reader, who would likely inflect it differently than the poet and create a pleasurable sonic experience of the poem particular to the privacy of reading alone.

Ultimately, while an elaboration of the full complexity of the semiotics of tone is beyond the scope of this short blog post, I want to note that, as a sonic term, it takes on different analytic registers in the case of the poetry audio archive: it is one way to designate, for instance, the differences between the experiences of the poem read on the page and the poem heard through the groove. When it comes to what Sarah Parry, in “The LP Era: Voice-Practice/Voice Document” (English Studies in Canada 33.4 (December 2007): 169–180), calls poets’ “voice-practices”—the shifting grounds of perception, projection and reception that shape a poet’s vocal performance—tone is contingent upon several factors, not the least of which is the material conditions of the recording (e.g., microphone placement and the recording scenario). Tone-as-affect, then, is inseparable from—yet, importantly, not reducible to—tone as an effect of recording.

Two recordings, in particular, offer complimentary contexts as well as necessary counterpoints to Brathwaite’s sense of tone in relation to “nation language.” The first is a 1972 Academy of American Poets reading, featuring Askia Touré, Sonia Sanchez, Raymond Patterson, June Jordan, Nikki Giovanni and Gloria Oden in which microphone placement and unhearability plays a significant role (which I will focus on in a future blog post) and the second is a 1980 lecture by Derek Walcott, also sponsored by the Academy. Walcott’s talk is titled “The Insulted Landscape,” dedicated to Susan Sontag, and alternately described by him as an essay in verse or verse essay on West Indian poetry.

Walcott introduces his talk as “a listening to an interior question,” a question that he later poses as: “Am I creator or conspirator?” He identifies the challenge for Caribbean poets as a duality of either making an overdramatic choice of writing only for the people or “selling out to another culture,” and during the Q & A he insists that this is not a necessary binary. “Dialect,” he says at one point, “enriches the imperial tongue with its freshness.” His preamble also frames this question with regard to other questions concerning identity—which, he says, “of course means race”—as well as the cultural and political stakes of poetic language for poets of color in the postcolonial Atlantic world. Within the Caribbean context, he calls this scenario the “tongue of an injured and insulted landscape.”

“The Insulted Landscape” has received little attention, at least in part because it is unpublished, nor yet available as a recording. George Handley cites it in his examination of Walcott’s critique of imperial imaginings of Caribbean landscapes (New World Poetics: Nature and the Adamic Imagination of Whitman, Neruda, and Walcott, University of Georgia Press, 2007). I am struck by the ways that Walcott situates this critique in relation to questions of speech, dialect and the challenge of articulating a poetics with/in the legacies of colonial violence and destruction. In other words, in this talk, Walcott is equally concerned with the visual and the aural dimensions of the “culture of exploration” that underwrites the “fictions of empire.”

Not only is Walcott’s talk contemporary with Brathwaite’s, but it also engages similar questions and issues regarding the sonic contours and distinctiveness of the languages of black diasporic poetics. In fact, Walcott cites Brathwaite during the Q&A and, in a remarkable moment of overlap, he contends that a poet should be concerned with “tone,” a tone that is not dishonest or apart from public spheres. Tone, he explains, can be polysyllabic and intricate, before stating that “the truth is in the tone, not in the vocabulary.” True or not, pondering a poet’s tone is a demanding task for the ear, which demonstrates the acute difficulties of close listening; it is one of the many challenges—as well as one of the many joys!—of listening to poets’ recorded vocal performances.

CURATOR’S NOTE: Each season we invite scholars, who have conducted research at the Poetry Room, to share some of their findings and insights on our blog. Our audio archive is a combination of Harvard-created recordings and those created by other non-profit poetry organizations, such as the Academy of American Poets. We wish to the thank the Academy for use of the Walcott recording.