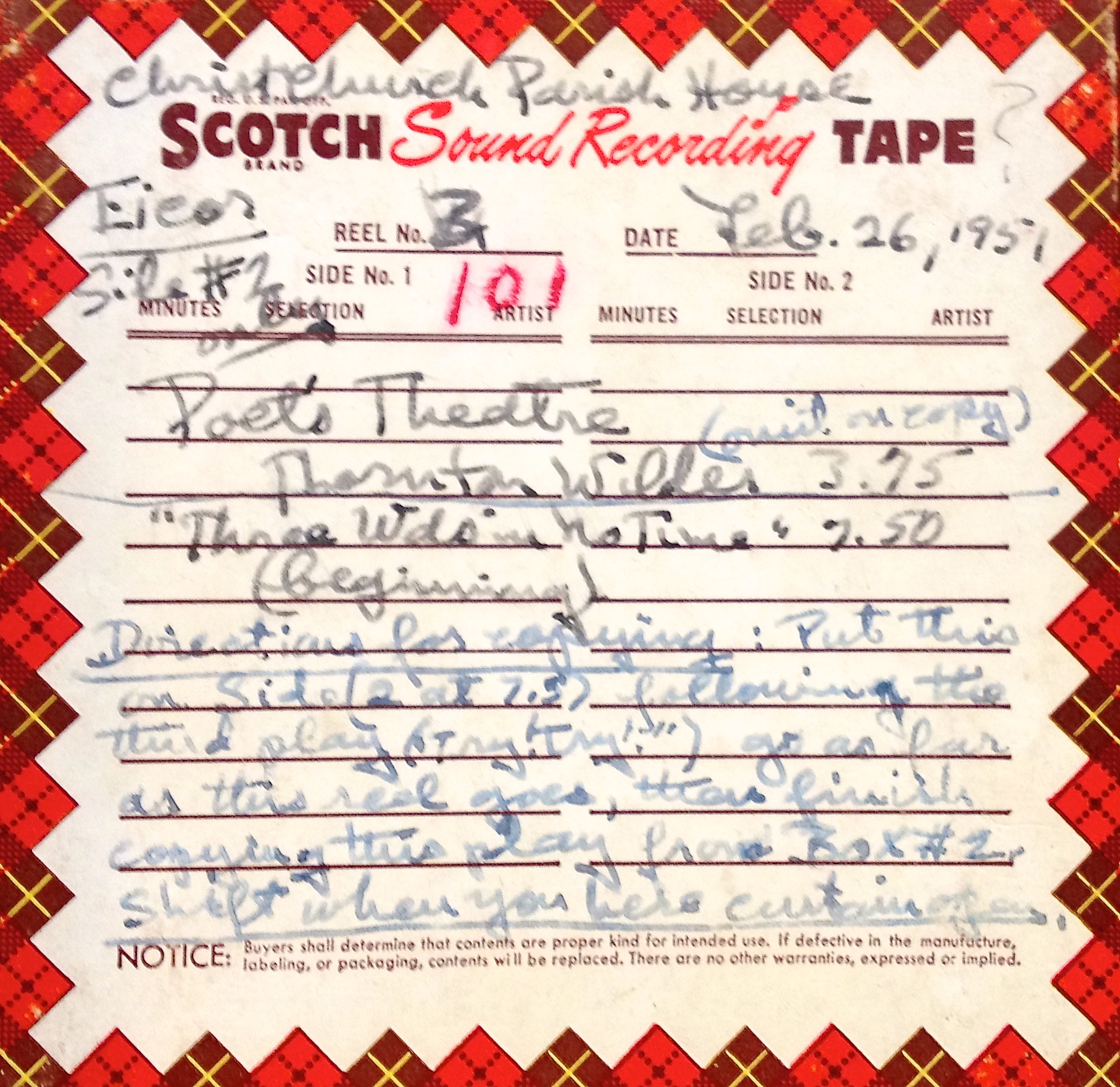 Last October, Christina Davis, the imaginative and disciplined curator of the Woodberry Poetry Room, made an amazing discovery: the original recording of an unscripted rant by playwright Thornton Wilder about the current state of drama and poetry, which he delivered spontaneously to a captive audience of theatergoers at the inaugural Poets’ Theatre event in Cambridge, Massachusetts, on February 26, 1951.


Since that memorable evening, myth and fact have quietly merged in retellings. Like much of the drama surrounding the New York School poets and painters in the 1950s, Wilder’s harangue, which followed the first performance of Frank O’Hara’s Try! Try! with John Ashbery playing the part of “John, a friend of the poet’s,” has become part of the lore of the period. In one interview I did a few years ago for my biography of John Ashbery’s early life, a former Harvard student present that night told me that Wilder’s “kind of crazy” rant lasted “nearly twenty minutes.” Wilder’s “scolding” of the audience for laughing during O’Hara’s play, and their annoyance at him for misunderstanding their pleasure, is discussed in Brad Gooch’s biography of O’Hara, City Poet, and repeated in Terence Diggory’s Encyclopedia of the New York School Poets, though an even earlier source is Nora Sayre’s “The Poets’ Theatre: A Memoir of the Fifties”:

During the Poets’ very first evening, in 1951, the spectators laughed freely at the comic juxtaposition of images in [Frank] O’Hara’s one-act play Try! Try!. Thornton Wilder, who was a visiting lecturer that year, leaped to his feet at intermission and scolded them: how dared they laugh? How could they fail to appreciate the vitality of “the new creative dramatic poetry in America?” Pacing to and fro while shaking his finger at his listeners, he lectured them until even the smiles were suppressed. Then he asked for contributions for the Theatre.

Certainly a memorable inauguration for the Poets’ Theatre!

In the fall, Christina and I listened repeatedly to Wilder’s impromptu speech, the existence of which both corrects and complicates the existing record of the evening, though several words are difficult to hear due to Wilder’s impassioned delivery. First, the “nearly twenty-minute” rant actually lasted only three minutes and seven seconds. Second, despite the feelings against it reported by individual members of the audience, it received thunderous applause. Third, the speech occurred not at intermission but after O’Hara’s play (the third of four plays performed that evening). Fourth, while Wilder reacted to the audience’s laughter at O’Hara’s very witty, though also very sad, play (reprinted in Amorous Nightmares of Delay), his speech suggested he was more excited by the play than upset by the laughter.

Wilder did not begin his speech angry; in fact, he began his speech by inviting the audience to the next two Poets’ Theatre productions, to take place in April and May. After doing so, he explained his larger point which watching O’Hara play had inspired him to make. Contemporary theatre, he argued, had entered one of the “great ages.” It was finally providing a new kind of access to “the most authentic way [in] which human beings talk to one another.” This crucial theatrical moment “could not have taken place thirty years ago.” Despite the fact that most of our lives are taken up by “immense strains and stresses,” we are “in America’s coming of age.” After talking about the theater generally for two minutes, Wilder chastised the audience for “laughter” in parts of O’Hara’s play. He felt the Cambridge, Massachusetts audience was behaving like “Mr. and Mrs. Smith,” an imaginary provincial couple irritated by what they viewed as the “strained artificiality” of contemporary plays. Wilder challenged the audience to rise above that attitude, not to be “fastidious” in their expectations, and to recognize that the play they just witnessed was full of “very remarkable things.” “Wish him well…do what we can for him,” he concluded. He fully championed the young poet and his play, suggesting in his encomium that he and O’Hara shared a wonderful vision for the future of American theatre.

In their memories of being chastised by Wilder at the event, the young audience reflected their feelings about how the playwright seemed to them in 1951: an old and authoritarian man, “shaking his fingers” at the audience like a prudish school principal, and, in the process, totally misunderstanding them and, even worse, missing out on the youthful verve of O’Hara’s play. In fact, the audio record shows that Wilder loved O’Hara’s play, championed its language and spirit, and saw the two of them as moving forward contemporary American theater jointly.

Do memories, strong feelings and sensations about an event offer a true account of what Wilder really meant to say or does this audio record correct the record? It is indeed a wonderful thing that we now have access to the original speech and can hear Wilder championing O’Hara’s play and vision, even if, in the absence of the visual markings available to the audience that night, it also only tells a piece of the whole story.

CURATOR’S NOTE: The Wilder excerpt was discovered on an uncataloged reel, the contents of which were excluded (at some point in the process of their production) from the reels that were ultimately cataloged for this 1951 Poets’ Theatre recording.  To hear an additional Thornton Wilder recording made at Harvard on August 6, 1951, visit our online Listening Booth.